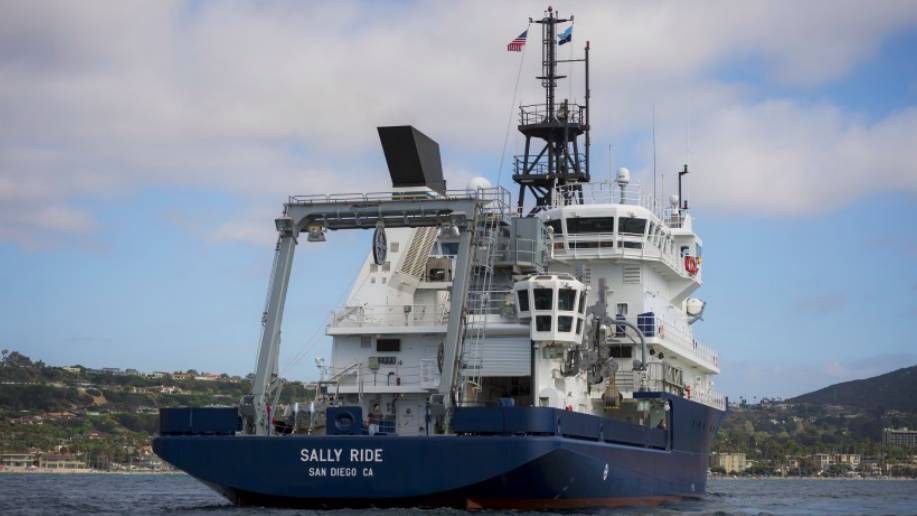 The scientists took sail on the Sally Ride, one of the most technologically advanced research ships in the country.

Scientists from UC San Diego’s Scripps Institution of Oceanography are turning to high-tech robots described as deep-sea “Roombas” to survey the toxic chemical “DDT,” which was dumped decades ago in the waters near Santa Catalina Island.

DDT was one of the first chemicals that shocked the public during the 1960s. It was a pesticide that was super effective. So effective that it poisoned birds and fish, and other wildlife.

“A recent study I wrote about in the Marine Mammal Care Center found that there is a connection between the presence of DDT accumulating in the blubber of sea lions and the cancers they have been suffering from for decades," said Xia. "Many people did not know this, but the biggest DDT maker was actually based in Los Angeles for decades. Recent discoveries underwater uncovered these barrels of waste that is connected to this company in the deep ocean on the seafloor not far from Catalina. So there has been this reinvigorated conversation about what to do about this toxic pollution and history that is right off our coast."

Soon after Xia released the initial story about DDT, the scientific community got together to find solutions for handling this dumping site.

“A team of scientists at Scripps down at UC San Diego saw this and said they had access to underwater robots," said Xia. "They also had two new robots that they meant to test run. So, rather than doing a more scripted test, they decided to use this robot to answer the first big question that everyone agrees is the first thing we need to figure out. To move forward with this issue, we need to map the seafloor and get a better sense of where these barrels are, how many are there, and whether there are any hot spots they can focus their research on. That is what they did. An expedition this big usually takes around two or three years to come together, but this month they set sail."

The scientists took sail on the Sally Ride, one of the most technologically advanced research ships in the country.

“In terms of the mission, I am mind blown," said Xia. "They have to cover almost 50,000 acres of the seafloor at 3,000 feet deep. And one of the scientists explained the high-tech robots as underwater Roombas. You program them, and they comb the seafloor on their own, pinging back. It takes 16 hours for them to need new batteries, then they pull them back on deck, swap out the batteries, and put in the second Roomba that is ready to go, and it keeps going on. They are doing this for two weeks, and it is super cool."

The plan is for the scientists to immediately provide data on a NOAA-run repository usually used for live-time hurricane updates, oil spills, and disasters.

“One of the lessons of DDT’s history is that once you put a chemical like this out there, it is hard to clean it up," said Xia. "But, I am very excited to see where this mapping data takes us. I know a lot of officials and scientists are too. I think once we figure out the extent of the problem and whether there are any hot spots, we can figure out where to go from there. And, hopefully, at some point, we will figure out whether or not restoration or remediation is the way to go. But right not, just even getting our minds around how big this problem really is 3,000 feet under the sea is huge in terms of informing us on what we can do next."

As many as half a million barrels of DDT waste could still be underwater today near Santa Catalina Island.

“The Scripps, NOAA effort will really shed light on what needs to be done next,” said marine scientist Mark Gold.

Read more about the expedition: https://t.co/Ezy2q0NWJp