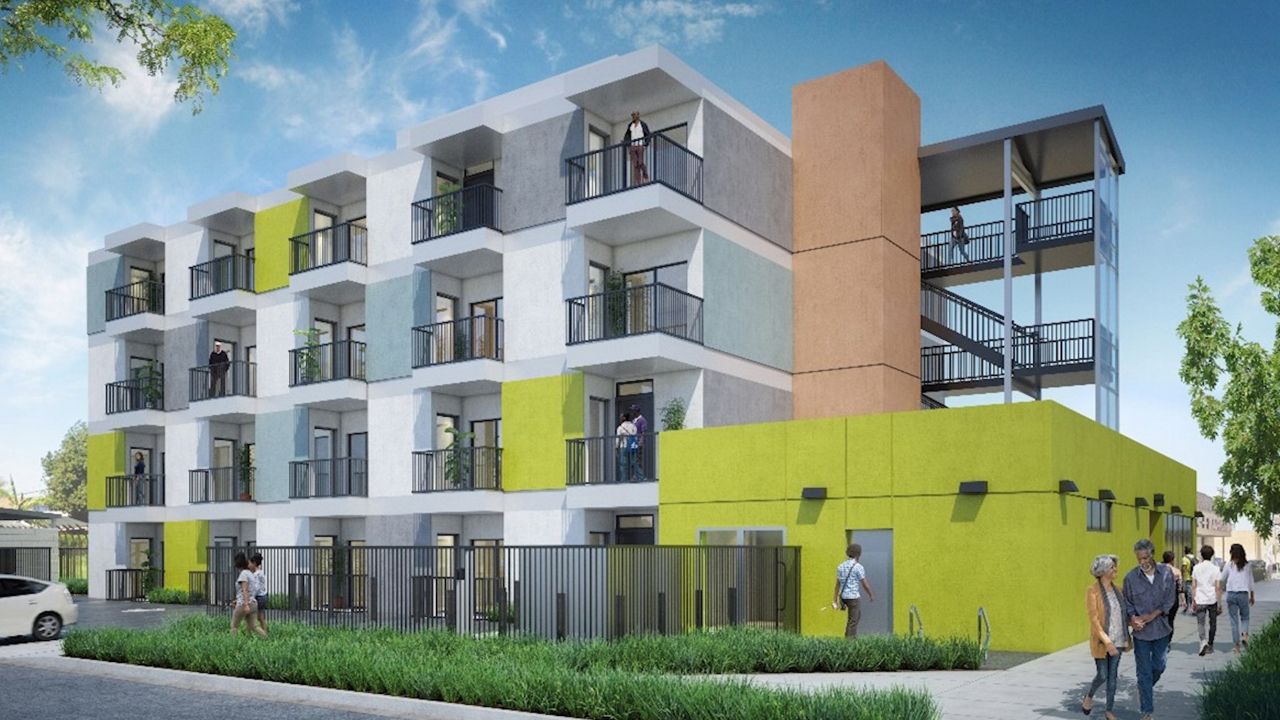 Civil rights and labor icon Dolores Huerta joined city, community and business leaders in breaking ground on a housing project for homeless individuals that will bear her name and is set to be completed this fall.

"In the richest country in the world, the United States of America, we cannot tolerate the situation that we have people that are homeless," Huerta said.

The Dolores Huerta Apartments will include 40 studio units, each with a private bathroom and kitchen to house those currently on the streets or in shelters. Unlike other housing projects, the apartments are created from modular crates, which the builder says speeds up construction and lowers costs. Each unit was under $200,000, less than half the average cost for similar publicly funded housing in California.

"We think the crates are a great model. We also work with modules as far as wood, so we do feel that based on the product that we're producing, studios or one bedrooms. Those work really well," RMG Housing CEO Tim Roth said.

On the financing side, Debbie La Franchi, founder and CEO of SDS Capital Group, said since all of the money came from her investors, financing was approved in less than two months compared to what it typically could take. It would have taken years chasing multiple public sources that use subsidies or taxpayer money.

"This model is so different, in terms of using private sector capital and doing it faster and quicker and cheaper, all the while creating quality, permanent supportive housing," La Franchi said.

"Historically, homeless housing has been done by government or nonprofit, and they aren't really inclusive to the outside private sector," Roth said.

SDS Capital and RMG Housing have a partnership, where SDS raises the money and RMG builds the housing.

The new apartment complex is just one of 30 projects the companies plan to develop and fund together in California, with most of those projects in Southern California.

"We are anticipating that perhaps as many as half of our 30 projects we'll invest in will ultimately be modular," La Franchi said.

The new apartments also will help satisfy a recent court order requiring the city of Los Angeles to provide housing for those living near dangerous freeway conditions. La Franchi said the city needs to do a better job expediting permitting and inspections to fast-track more of these projects.

"If we're saying it's a crisis, let's treat it like a crisis," she said. "The city should be giving the red carpet treatment to every permanent supportive housing project, every developer that's trying to build these projects in this city."

District 9 Councilmember Curren Price Jr. said the city should work harder to create more public-private partnerships. His district has the second-highest number of homeless individuals in the city.

"Other projects have taken a much longer period of time to complete. They're much more expensive, and it creates frustration to tell you the truth. People want to see some action now," he said.

And taking action is how Huerta has made a name for herself.