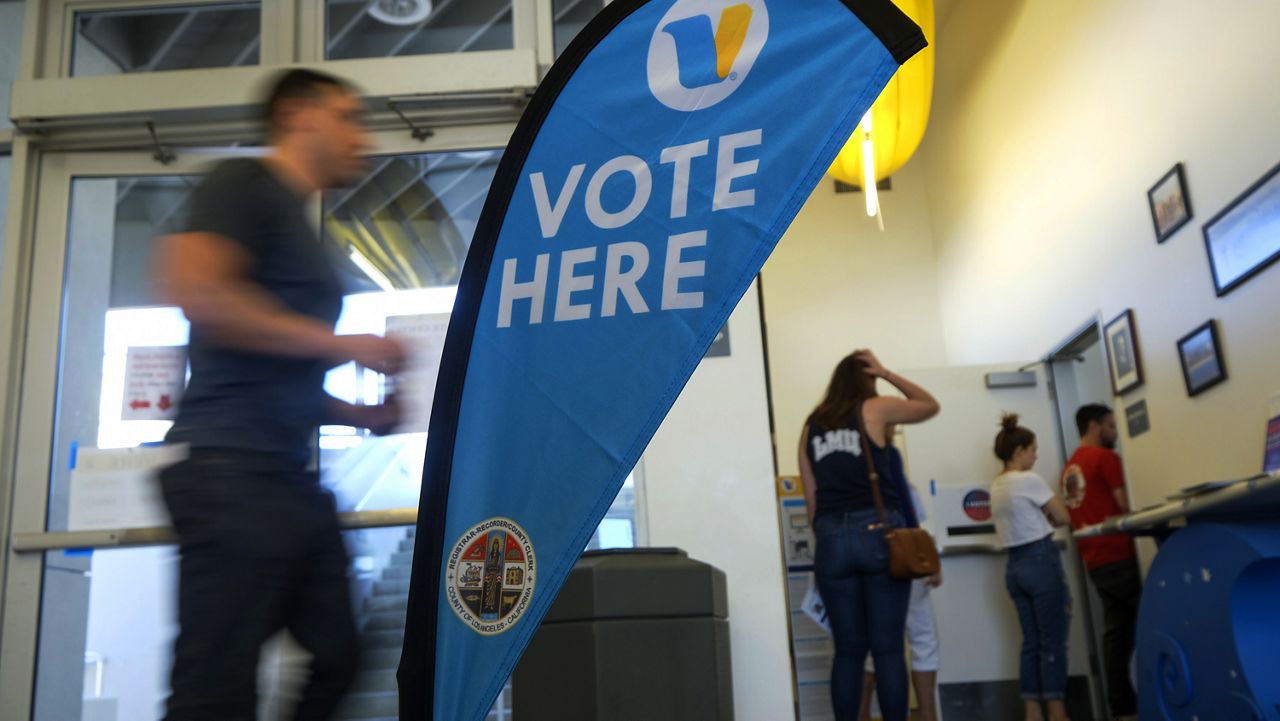 In this March 3, 2020 file photo, voters wait in line to cast their ballot on the Super Tuesday, at a voting center in El Segundo, Calif. With a divided nation on edge as Election Day approaches, California is warning local election officials to prepare for disruption at polling places and potential cases of voters being intimidated or blocked from casting ballots. (AP Photo/Ringo H.W. Chiu, File)

What the Asian American Vote Means for This Election

Asian American voters are the fastest growing group of eligible voters in the nation, according to the Pew Research Center, and the number more than doubled from 3.3 million to 6.6 million from 2000 to 2018.

Karthik Ramakrishnan, professor of public policy at UC Riverside, tells Inside the Issues that, in 2016, Chinese American voters formed a group called Chinese Americans for Trump that utilized the app WeChat to generate support.

“It seems like Chinese Americans were making a big move towards Trump and towards the Republican Party and at the very least, when it came to rhetoric it seemed like there was a lot of pro-Trump support among Chinese Americans,” he said.

Trump did not win the Chinese American vote in 2016, he continued, and said it looks like Trump is losing support this time around within that demographic.

“So, all of that anti-China rhetoric, but also, importantly, the rhetoric around coronavirus, with the various kinds of epithets that he and a lot of his supporters have used, seems to have turned off a lot of Chinese American voters,” Ramakrishnan explained.

Although, he said, there is still a small, core group of Chinese Americans who support and appreciate the stance the president has taken on these issues.

“So you have a group of Chinese Americans, mostly Chinese immigrants, who left China and are critical of the Chinese government and what it’s doing. So for that population, a lot of the saber-rattling and actions that the Trump Administration and President Trump himself have done, are actually in line with their beliefs,” he said. “But for many others, that's not as important of an issue. Other issues like affirmative action seemed like they might have attracted some Chinese American voters to the Republican Party, but, again, I think it's important for viewers to know that this is a minority of the population within the Chinese American population. Most Chinese Americans are Democrats and they support Joe Biden.”

Among Vietnamese American voters, Ramakrishnan said younger voters, the so-called second generation who were born in the United States, tend to be more progressive than Democrat, although older voters, the refugee generation, traditionally have been more conservative.

Vice Presidential candidate Kamala Harris is the daughter of Jamaican and Indian immigrants, something she hasn’t talked about publicly too much, until now.

“What we saw is an opening up by Kamala Harris, during the course of her presidential run, she didn’t talk about her Indian identity or heritage much in the beginning of the campaign, but towards the end she was opening up more especially after her biography came out and she went on late night shows,” said Ramakrishnan. “I think she got more comfortable in terms of talking about herself. She wanted to mostly talk about the issues in the beginning and I think you see a continuation of that trajectory after she got nominated for VP.”

Voters in both Riverside and San Bernardino Counties, otherwise known as the Inland Empire, have shifted from red to blue, Ramakrishnan said, when it comes to presidential races, as well as many Congressional races, but local offices are nonpartisan.

“You do see either Republicans or conservatives doing fairly well and especially the supervisorial level,” he said. “We’ve had some controversies recently, especially in Riverside County, in terms of Republican party activists who have been agitating to reopen the economy and who think that the public health guidelines have been followed too closely but then you have more progressive forces pushing back.”

“It’s kind of ironic, I mean these, whether or not to reopen and how to reopen, politics should not play a role in this, it should largely be based on public health recommendations and the risk of the disease spreading but, unfortunately, it's gotten very politicized in our region,” he continued. “I'm hopeful that moving ahead after this election that we can have a policy conversation that’s based on the merits without too much of the partisan politics coming in, but that might not be realistic.”