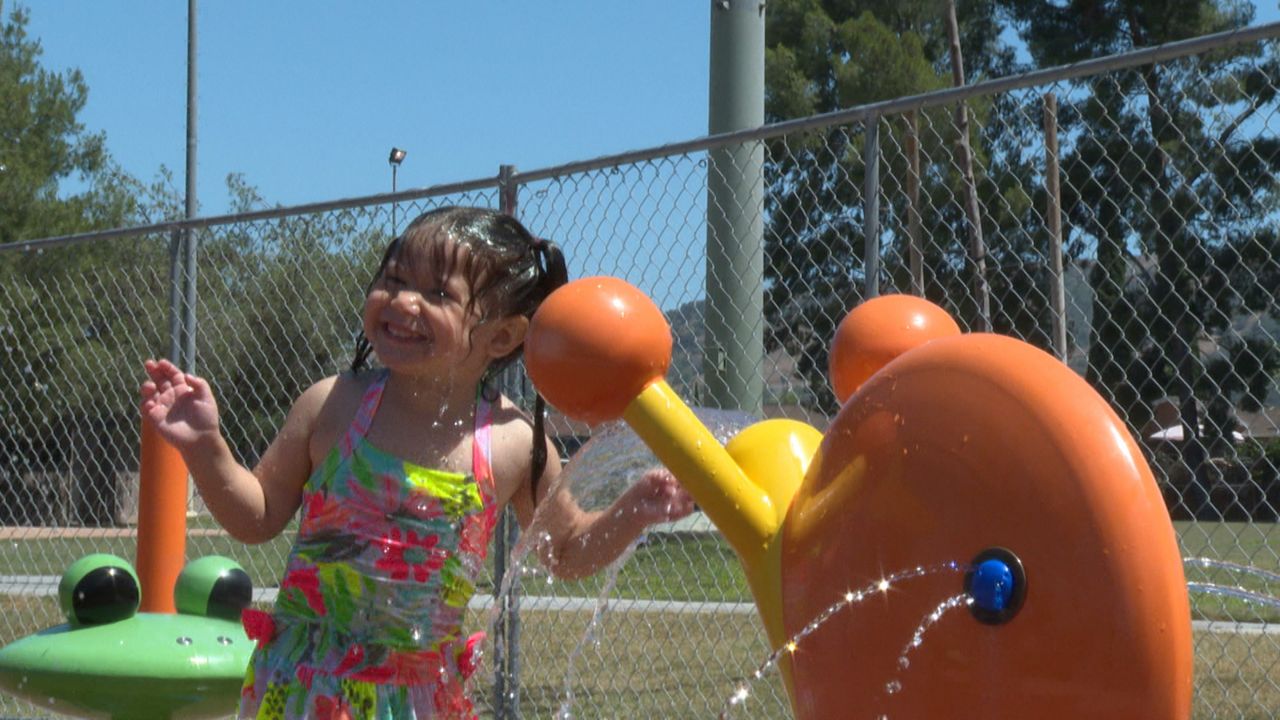 Marisela Hernandez's daughter enjoys a day out at the splash pad at Carolyn Rosas Park in Rowland Heights.

ROWLAND HEIGHTS, Calif. — When the heat is on, the sounds of water splashing are some of the coolest sounds around. And in the middle of a pandemic, getting outside to cool down can be more refreshing than ever.

"We live in an apartment complex with four pools and all of them are closed, so that’s been really hard for us now that temperatures are warming up," Marisela Hernandez said.

She and her husband visited the splash pad at Carolyn Rosas Park in Rowland Heights. "The last couple of years, we’ve come to the splash pad, and it’s like the highlight of our summer," Hernandez said.

She says during a normal summer, her daughters Camilla and Zayle are out at the splash pad at least once a week. Of course, this summer is anything but normal.

"Now there is a perimeter around the splash pad and each splash pad will have monitors to allow people in and people out," said Daniel Lara, Area Pool Supervisor for Los Angeles County Department of Parks and Recreation.

Those monitors are lifeguards, since the county pools remain closed. "Running is probably the only big safety regulation that we have to monitor," said Caitlyn Gonzales, a senior L.A. County Lifeguard.

High-touch features such as water cannons have been removed, and the county says the chlorinated water is enough to kill the virus. Splash pads are also operating at reduced capacity, only allowing anywhere from 12 to 32 people depending on the size of the area. There will also be time slots depending on the crowds.

"It could go anywhere from 15-minute sessions with a five minute break, where the pad is cleaned, or it could be up to 30 minutes if there isn’t so many people waiting," Lara said.

Hernandez says it’s a nice break for the entire family…"As long as there isn’t, I don’t know, more than 5 kids," she said. "They just see another little kid and they’re like, 'Oh, a new friend,' and a new friend is nice, but we still have to keep our distance."

But after being cooped up inside, watching her kids splash around is a good reminder summer is still here.