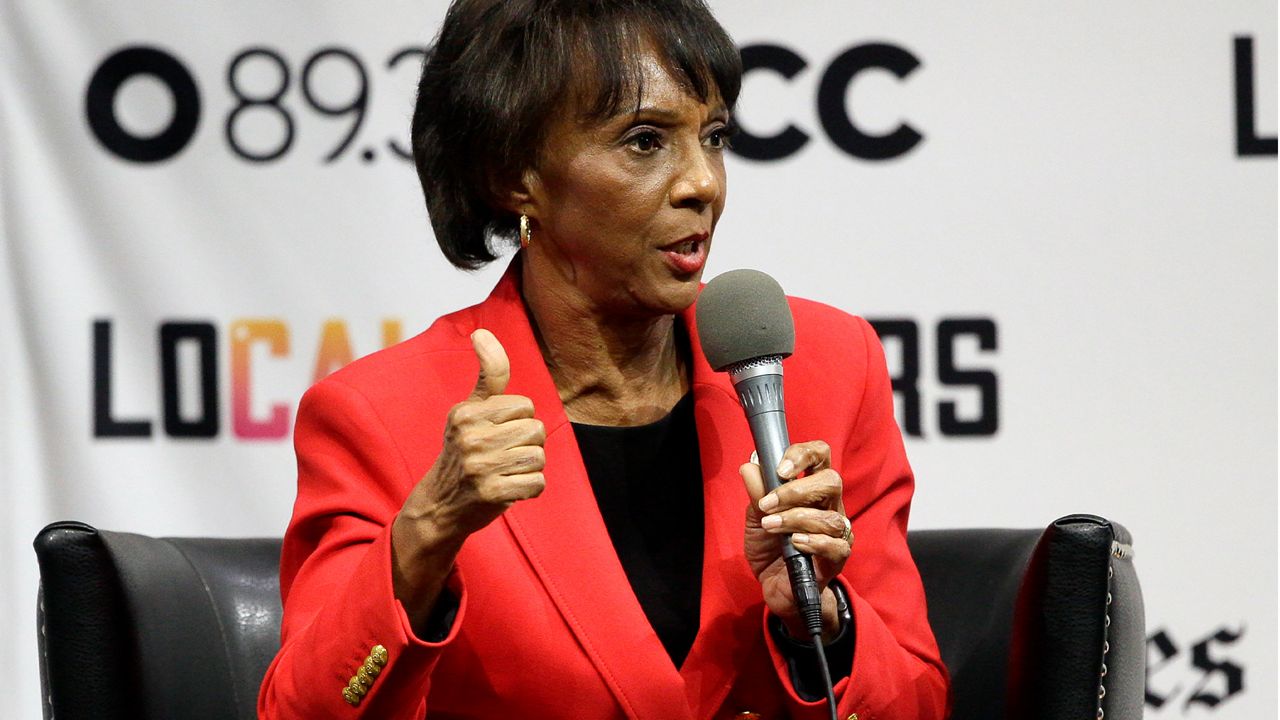 Mayor of Los Angeles Eric Garcetti knelt with protesters last Tuesday as they called for him to defund the city’s police department. A day later, protesters outside of L.A. County District Attorney Jackie Lacey’s office criticized her for not prosecuting more police officers accused of misconduct.

Lacey said she has tried talking to Black Lives Matter protesters, but they wouldn’t let her speak.

“I was meeting with Black Lives Matter regularly before the protests started happening outside my office, and their request was to come out and meet with a large group,” she said. “We tried that, and it really disintegrated as there was a lot of yelling and screaming, and they wouldn't even allow me to talk. That's how bad it was. At least with the mayor, they allow the mayor to speak his mind and to answer. And that's all I'm asking for is to be treated with the same respect that you treat other leaders in these positions.”

"I'm asking... to be treated with the same respect that you treat other leaders in these positions."@LADAOffice said she tried talking to Black Lives Matter protesters, but she couldn't speak over the "yelling and screaming."

For more, watch Inside the Issues tonight at 8. pic.twitter.com/d1BcNJK2F3

Lacey wants protesters to know that as District Attorney, it’s her job to prosecute cases.

“For the last seven years, we've actually prosecuted 21 officers for excessive force,” she said. “I’m the only D.A. in the state who has a pending officer-involved shooting case notwithstanding that I've been given no credit for this.”

Lacey said looters will either be charged with a misdemeanor or felony depending on what they were stealing.

“We're not out to punish people who do crimes out of desperation. So first, if somebody's getting formula, baby milk, those kinds of things, that’s different,” she said. “We're after organized groups that we’ve seen. We’ve seen people ride around in cars, jump out, go in, steal a bunch of designer clothes - purses, sneakers, those kinds of things - run out. They’ve got so much stuff they're dropping it. We're looking for those people because we want to discourage that activity.”

Looters who stole expensive items for personal gain are harmful to “the witnesses or victims who own some of these businesses and the people who lose jobs because of it,” according to Lacey. The D.A.’s office will also look at the person’s prior record.

As of Wednesday, “61 people have been charged with crimes committed during protests in Los Angeles County over the past several days,” according to a press release from the D.A.’s office. Due to the COVID-19 pandemic, some cases qualified for zero bail.

“If it’s somebody who has no prior record, we might err on the side of a misdemeanor,” she said. “But for those who we see have a pattern of organized criminal behavior, those folks, they've got to be held accountable and will probably be prosecuted as a felony.”

Felony looting carries a possible maximum sentence of three years in county jail, according to the D.A.’s office.

“Our office is very diverse. I stress diversity, fairness, and these cases are really challenging,” she said. “A lot of excuses that people shout the loudest at me about are those cases where the man who was killed had a gun or was shooting someone or harming someone, and it's odd to me that those cases seem to be the ones that are put up as examples.”

Lacey founded the Criminal Justice Mental Health Advisory Board, which presented the L.A. County Board of Supervisors with “A Blueprint for Change.” The 41-page report lists existing resources and sets priorities for treating those with mental illness.

“We put out something called the ‘Blueprint for Change’ to talk about mental health, getting people more services, so the police don’t have to be called.”

The D.A.’s office has trained more than 2,000 first responders on how to deescalate a situation with someone who has a mental health crisis.

“I would say, let's sit down and talk, not shout,” she said. “Let's talk about ways — concrete ways — in which we can make a difference, and listen for a change. Don't always buy what some outsider is coming to tell you, because our record in that D.A.’s office is really better than what anybody else is claiming they can do.”

Lacey said she’s angry about the murder of George Floyd too.

“I'm angry over a lot of injustices that I see, but I do believe that anger can cloud your judgment,” she said. “We put out a rather lengthy explanation every time we decline a case, and you know what people tell me? ‘I don’t have time to read it.’ Well, the facts matter. They matter. And I would encourage anyone to look at the documents we put out, look at the facts we put out, and don’t just let anybody throw numbers at you and say, ‘See, this is the problem.’”

Lacey said change starts in the hearts and minds of people.

“We still in this country suffer from bias. We stereotype people of color as more dangerous, and we’ve got to train and do more to eliminate bias,” she said. “In our office, I want to figure out what it is we can do differently with these cases, because we are trying. We’re training officers.”

The D.A.’s office is open for suggestions from Angelenos on how to improve, but Lacey said her team is always looking for better ways to operate.

“I think that what you’re going to find for the most part is our lawyers are made up of people of the community, and they are independent thinkers. They are not just arms of the police,” she said. “They look at these cases, and they do the best they can. Twenty-one officers have been fired for excessive force since I've been on D.A., and I just want Black Lives Matter to at least - at the very least - acknowledge that things are changing.”