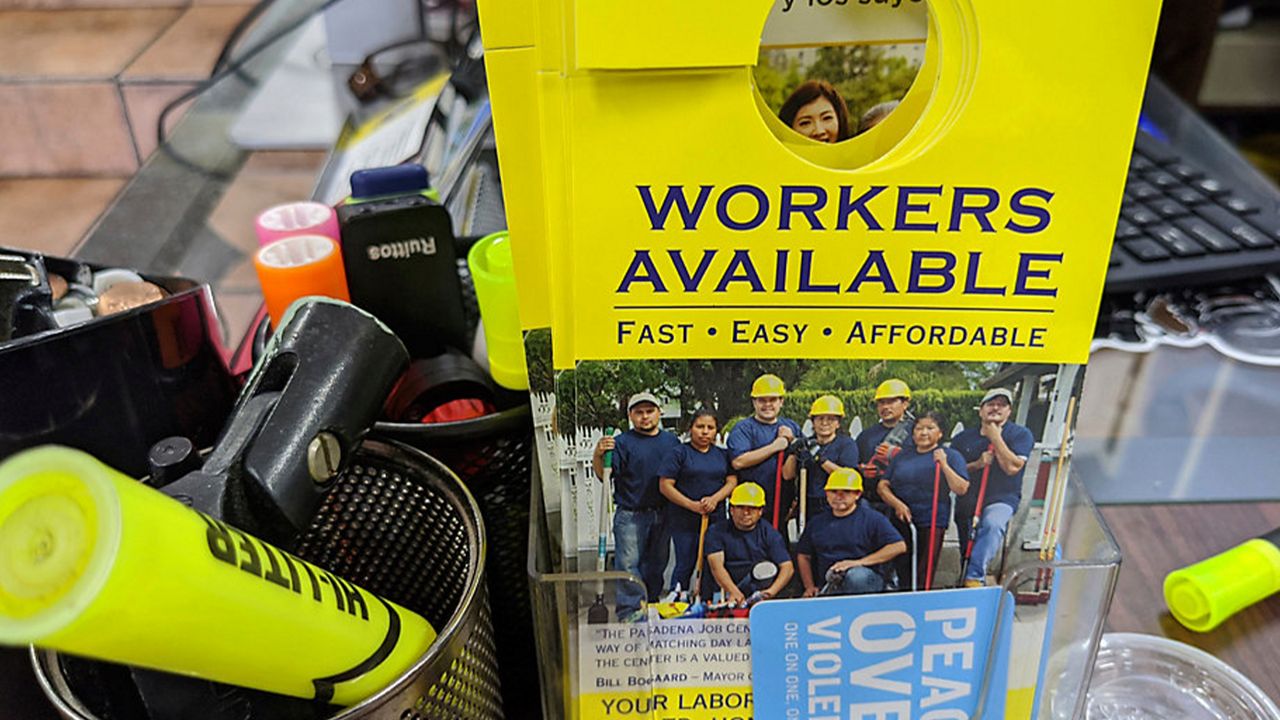 A flier reads "Workers Available" at the Pasadena Community Job Center in Pasadena, Calif., Thursday, May 7, 2020, during the coronavirus pandemic. The job center is now closed to the public but normally connects members of the community, residential customers and small business owners with skilled, hardworking day laborers. (AP Photo/Damian Dovarganes)

4.7M Unemployment Claims Processed in California as Coronavirus Continues to Take Jobs Away

"These are not normal numbers," he said.

California Labor Secretary Julie Su said the “technological system was not ready for” the influx of UI applicants.

“The technology system that our unemployment insurance claims are built on is a collection of several outdated platforms,” Su said. “When Governor Newsom came into office, we accelerated the effort to replace that by as many as nine months, but we were still a few years away from building a true state of the art system, so we are feeling the effects of that now each day.”

EDD has paid $12.3 billion in benefit payments since mid-March.

After hearing many Californians complain about the system, Su decided to call the EDD herself.

“Our basic technology was not what it needed to be,” she said. “I will say this: Unemployment insurance is cyclical, so when the economy is good, the number of staff who process unemployment insurance and also the call center that is available to help with claims is at all time lows. So when the pandemic hit, that was true too.”

Before Gov. Newsom shut down the state economy in March, Su said California was expecting year over year growth after decades of economic boom. Therefore, staffing the EDD in early 2020 was not at the top of the state’s to-do list.

“We had to make up ground there in terms of both staffing and just getting enough people on the phone to be able to answer. And frankly the numbers did roll straight to voicemail.”

At the Governor’s direction, the EDD expanded its call center significantly. People are answering the phones 12 hours a day, seven days a week.

Even though people are picking up the phones, Su said more people need to be assisting with claims.

“This is related to the archaic technology we have,” Su said. “A lot of the things that people want to do with their claims, you can't do on your own. Once you file, if you need to make a change, or correction, or cancellation, you have to reach somebody to help you do that. So just frustration is built on top of other problems that are already there that we were in the process of fixing but didn't quite fix yet.

"Our technological system was not ready for it."@JulieSuCA of @CALWDA said unemployment insurance claims are built on a collection of outdated platforms that couldn't handle the influx of requests during the pandemic.

Still, $13b has been paid to Californians since March 15. pic.twitter.com/5rjeeJ6WUv

Inside the Issues viewer, Tracey Hynes, wrote to us in late April, detailing her frustrations.

"Unemployment!!! I’ve been waiting since late March for my unemployment insurance. As of this Friday I will have 8 weeks all certified and sitting in a pending status. There are thousands and thousands of us waiting. What can you do today that will correct this issue?"

Su said identity verification is one of the few things that might slow down an unemployment insurance claim.

“It sounds like maybe she got a notice that they needed to verify her identity,” she said. “Sometimes that happens because what the employer has reported in terms of income is different from what the employee has reported. Sometimes it's an error, and we see this all the time. I know it’s incredibly frustrating, but sometimes it’s an error in the application itself.”

Errors in the application also slow down the process.

“I’ve heard from lots of people, obviously Tracey isn’t saying this specifically, but they’ll say, ‘I’ve applied on my phone, and I made a mistake, and I need to correct it.’ Again, the problem is that you have to reach somebody to help you do that. So I do want to really send a clear message: We need people to be extremely careful in what you submit when you submit the application at the first instance.”

For independent contractors, the process for claiming unemployment looks a little different. Pandemic Unemployment Assistance (PUA) is a federal program under the CARES Act that’s intended for people who are self-employed. The application went online on April 28.

“It’s actually the same application as UI. So you go through the EDD portal into UI Online, you answer some questions, and if you were self-employed, or a true independent contractor, or there's a few other ways you can file, like if your income on W-2 was too low to qualify for UI, you can get Pandemic Unemployment Assistance.”

Unfortunately, PUA doesn’t benefit those in creative industries, given the sporadic nature of their work. Su said expanding the program to include artistic workers would help many Californians.

The process is slower for employees who have been misclassified as independent contractors.

“That means that you should have been an employee and enjoyed all the protections of California labor law, including minimum wage, overtime, meal and rest breaks,” Su said. “California has very strong workplace laws that we are really proud of because they embody our California values. And so in those situations you can apply for unemployment insurance, and we will do a wage investigation, and we will use the income that you make, even if you were called an independent contractor, if you were misclassified, we will use those wages to assess the amount of unemployment insurance you get.”

Unemployment insurance was born out of the Great Depression. Employers pay into it so that employees, once they lose their jobs, can benefit from these funds.

“It is a shared responsibility. The way it works is that employers pay into it and it becomes a safety net precisely for times like these which are hard times when people are out of work temporarily through no fault of their own,” Su said.

When employers misclassify their employees as independent contractors, Su said they break a “social contract” because they’re not paying into the system.

“Now for that and a host of other reasons, our UI fund that employers have paid into, has been depleted. But that sounds scarier than it really is, because the system here and in the past has been that when that happens, the state, all states, can get loans from the federal government to make sure that people continue to get their benefits,” she said.

“We’ve known that that was going to happen. We were ahead of it. We've already started to borrow. This is not just a pandemic related situation although, obviously, this is the worst situation that we have seen,” Su said. “But those benefits will be funded and then later the state will pay back those loans. In fact, under the CARES Act, any loans that are taken all of 2020 will need to be paid back without any interest. And we’re looking to the federal government to continue to do things to support states in situations like this.”

Su said she understands the frustration that comes along with filing an unemployment claim in California.

“Those are legitimate complaints. It's our job as a government, especially in times like this where things are so dire and so desperate, to do everything we can in our power to try to make things better, and obviously to push benefits,” she said. “At the end of the day, that is our number one priority, but it's also to communicate as clearly and transparently as we can about things that can be very complex and very frustrating, so I feel like that's my job.”

Su said she wishes she could snap her fingers, change the technology that the unemployment insurance system is built on, and streamline the process.

“Short of that, we’re doing everything that we can and trying to just be very clear about that,” she said. “The struggles that people are facing right now, you know I have a great deal of empathy for them… We’re all human beings trying to do the best we can through one of the scariest times ever.”

Jennifer Rufer contributed to this report.