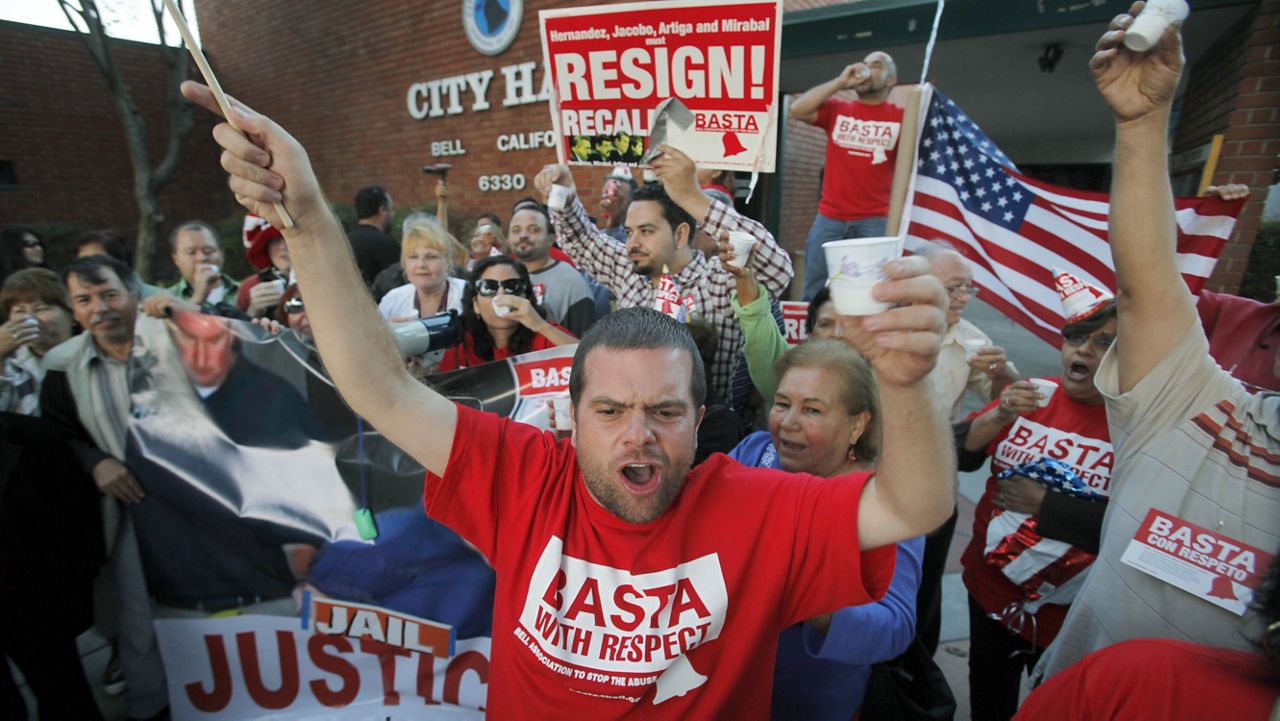 Hoisting a celebratory toast of sparkling cider, Jesus Casas, a member of the Bell Association to Stop The Abuse, or BASTA, which also means "enough" in Spanish, joins other residents of the city of Bell, Calif., celebrating the arrest of current and former city officials on corruption charges, outside City Hall Tuesday, Sept. 21, 2010. (AP Photo/Reed Saxon)

From Beaumont to Vernon, the Southland has its fair share of rigged elections and bribes in politics. On this episode of Inside the Issues we explore the role of money in Southern California’s local elections.

Our reporter, Ariel Wesler, took a deep dive into the area’s most prolific scandals including one in the city of Bell, where the Los Angeles Times uncovered that the City Manager, and other city employees, were receiving salaries two to three times the size of larger cities.

LA’s history is deeply rooted in political corruption, but only one mayor has been recalled. Meet Frank Shaw and the bombing that got him thrown out of office. @issueson1 @SpecNews1SoCal #money #ethics #politics pic.twitter.com/6qGa8vw3zG

Christian Grose, Associate Professor of Political Science and Public Policy at USC and Academic Director at the USC Schwarzenegger Institute, talks about how Southern California’s political scandals compare with other regions in the United States and why many of these stories are coming out of small, little-known cities in the area.

Los Angeles City Councilmember David Ryu talks about the efforts that have been made in setting boundaries on campaign contributions at the City Council level.

"Campaign finance reform affects everything in our lives." Sean McMorris, chapter president of @representus San Gabriel Valley, has been calling on change in campaign finance rules.

More on money, ethics, and politics tonight at 8 on Inside the Issues. pic.twitter.com/bCYL1Kw0VG

Bradley Hertz, Partner at The Sutton Law Firm, talks about rules that are in place to preserve ethics in politics.