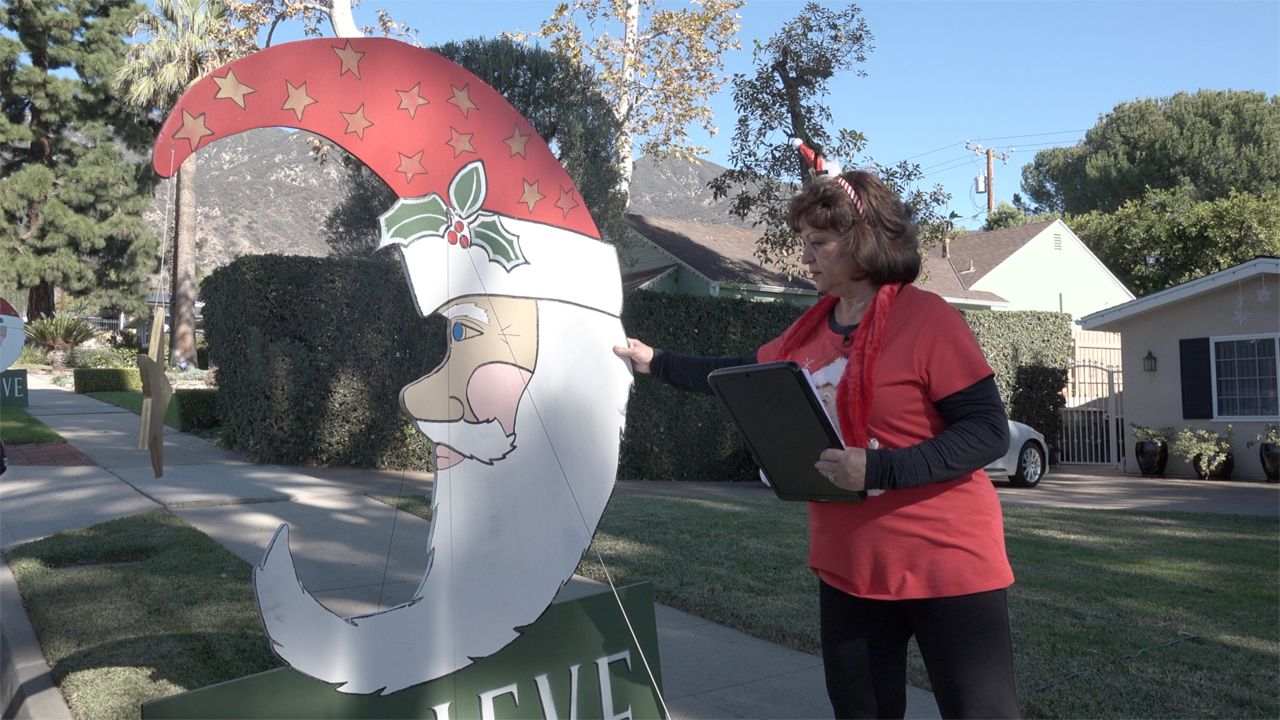 PASADENA, Calif. — Sandy Reaume and her clipboard are a holiday tradition. On the second Saturday, every December, she walks briskly down the street, inspecting her neighbors' houses, checking things off her list.

"Oop!" Reaume said as she pointed to a house on the left. "He doesn't have his Santa moon out yet."

Reaume is preserving a 70-year holiday custom in Pasadena's Upper Hastings Ranch neighborhood. Since the neighborhood was built, homeowners have decorated the narrow grass parkway that runs down each street. Each street follows a common theme.

Reaume is one of the "block captains" for the Upper Hastings Ranch Homeowner's Association. She puts the "Ho-ho-ho" in the HOA.

At one door, Reaume knocked three times. When she didn't get an answer, she opened the mailbox and hollered.

Her block decided on a theme last summer.

"We call it the crescent moon," Reaume said.

The plywood display is Santa's face and hat superimposed upon a moon with the word "Believe" painted below. Each home receives one to erect in front of their house. Putting them up and lighting them is voluntary. But Reaume uses her Christmas charm and powers of persuasion to ensure 100% participation.

Reaume knocked on another neighbor's door to politely ask why their Santa moon wasn't up yet.

"Oh, I was gonna do that later this afternoon," said the sleepy-eyed neighbor, opening the door just a crack.

"Alright. Great!" Reaume replied. She spun on her heels and headed for the next house.

Another neighbor, putting up his Christmas lights, explained Reaume's tenacity.

"She has a whip that she keeps up at the house," said the neighbor with a laugh. "And she just goes up and down the block."

He also said Reaume expects absolute conformity. "Santa's nose" on each of the plywood displays must face the street, never toward the home.

"And they know that is one of my pet peeves!" Reaume said. She admits she will turn a wayward sign the proper way without getting a neighbor's permission.

And the floodlights must be white, too. One of the neighbors confronted Reaume about that as she did her clipboard rounds.

"I wanna get my green lights back up there, again," the neighbor said.

"No. You cannot Armando!" Reaume answered. "How many times have I said, it has to be white?"

Technically, Reaume's jurisdiction is confined to the parkway. She is only in charge of monitoring the plywood signage. The homeowners take care of any decorations on their houses and lawns.

"But, you know, I do like to have their homes lit up too," Reaume said. "Because it's so nice when the people drive up and down our streets."

Reaume explained how people come from miles around to drive up and down Upper Hastings to see the displays. She said she wants to keep the tradition going, and she doesn't want to disappoint the visitors.

The deadline was at 6 p.m. on the second Saturday in December. At that hour, residents were asked to power up their displays. It's called the Upper Hastings Ranch "Light up."

But some residents, like Debbie McGinley, began decorating long before block captains came by with a clipboard.

Two weeks earlier, McGinley sat on her front lawn going through boxes of Christmas lights that have been stored in her side yard for the past eleven months.

"Untangling them is always such a joy," McGinley said, her voice dripping with sarcasm like the plastic icicles she will install on her eaves. "This is how the fun starts."

McGinley is not in Reaume's dominion. She has her own block captain. But Reaume's reputation traveled the several blocks to where McGinley lives.

She finally finished untangling and began to hang the lights.

"Thousands and thousands of lights," McGinley said with a sigh.

McGinley competes each year in Upper Hastings' contest for best Christmas display, but she has to get this all done by "light up." By the way, her block's parkway display is a snowman.

"And the carrot must face toward the street!" McGinley said.

McGinley remembered when she was a little girl, and she and her family drove to Upper Hastings to gawk at the holiday displays. She has since married into this. McGinley's father-in-law, now deceased, began decorating this same home back in the early '50s, when Upper Hastings was built.

She pointed to dozens of trophies lined up on the front porch that he got from the HOA for his Christmas displays. McGinley admitted she's under pressure to keep this ritual alive, and it's not easy.

"It is back-breaking hard work," McGinley said. And she also admitted how she is tempted to skip a year.

"We fantasize every year 'going dark,'" McGinley said with a laugh. "But, it's only a fantasy. We would never do that."

"One, two, three, go!" McGinley said as her husband threw a switch.

Her house erupted in color. Strings of lights fall from the eaves, over bushes, and across the lawn. Giant snowflakes blink. There are no fewer than four Christmas trees and two inflatables—a giant dog and a 15-foot Santa. Even her husband's Ford F-150 is decorated like Santa's sleigh.

Light it, and they will come. Just a few moments after the light-up, cars began lining up to tour Upper Hastings. McGinley stood in front of her home to see the procession.

And, Reaume was happy too. She was last seen standing in front of her home, checking the last box off her clipboard.