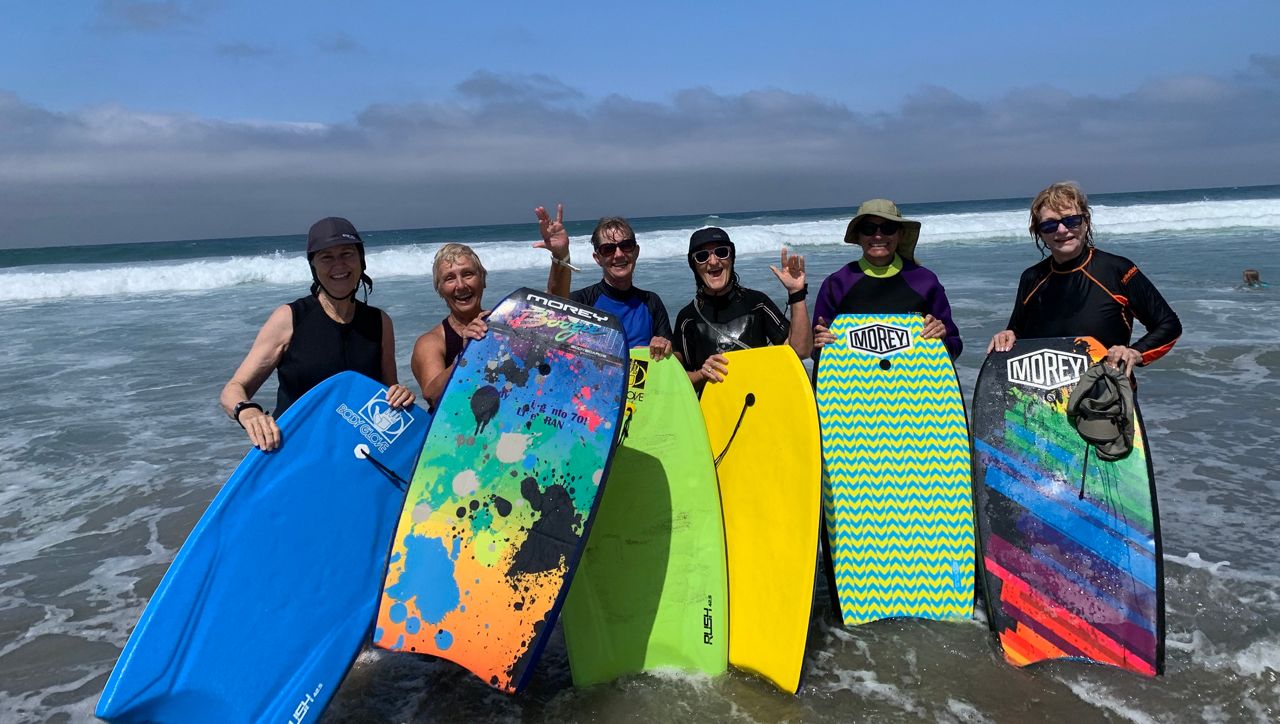 SOLANA BEACH, Calif. — Age is just a number, and a group of boogie boarding women in Southern California is the epitome of that saying. Some of them continue to shred straight into their 60s, 70s, 80s, and even 90s.

The wisest member of the boogie boarding bunch based in Northern San Diego County is Charlotte Gumbrell. She's been boogie boarding for a long time. She said one can't beat the feeling of catching a ride.

"You forget everything, except for the ocean, the board, and it's wonderful," Gumbrell said.

Gumbrell has been boogie boarding on-and-off for about four decades. It's a sport she said she only started doing after becoming a grandmother.

"I bought them for all my grandchildren," she said. "And I bought one for myself!"

Gumbrell is 96 years old. She's always led an active life, even after she stopped doing other things.

"Well, I don't drive anymore," she said. But that doesn't stop her from going boogie boarding. She even goes alone sometimes. "I would go to Moonlight Beach by myself. I would go Torrey Pines by myself," she said.

But a few years ago, Gumbrell learned about a group of mostly 60-plus-year-old women who also love to boogie board.

"I didn't even know they existed! And I've lived in this area almost all my life. And I did not know," she said.

Fran Dyer helped start the boogie boarding group about ten years ago. "We didn't want to go by ourselves," she said. "And our grandkids and children were all living far away. So, it was us alone or with company. And that's why we started it."

The club is for anyone new to the area or experiencing a major life change, such as retirement or loss. Another thing the women have in common is a love of the ocean.

"That saltwater makes everyone feel so active, so alive," Dyer said.

And Dyer said anyone is welcome to feel alive too and join the group, even the husbands. Although Dyer said, "we call ourselves the Boogie Boarding Babes."

"That is so funny, isn't it?" Gumbrell chuckled after hearing the name.

There is no funny business out in the ocean, though. Gumbrell is fierce, fearless, and, one might say, a bit feisty too. She reminisced about some of the times she has hit the water alone.

"Sometimes, these preteen boys would try to beat me. And we'd be out catching a wave, and they would look at me as if to say, 'Ok, let's see who can win,'" she said.

And well, Gumbrell wins a lot and also wins at enjoying every minute of life.

Gumbrell and all the Boogie Boarding Babes can't resist the call of the ocean.

The Boogie Boarding Babes are now about 92-members strong. The babes meet several times a week, even during the winter when the water is chilly. During the summers, they have brown bag lunches and hang out after a session in the water.