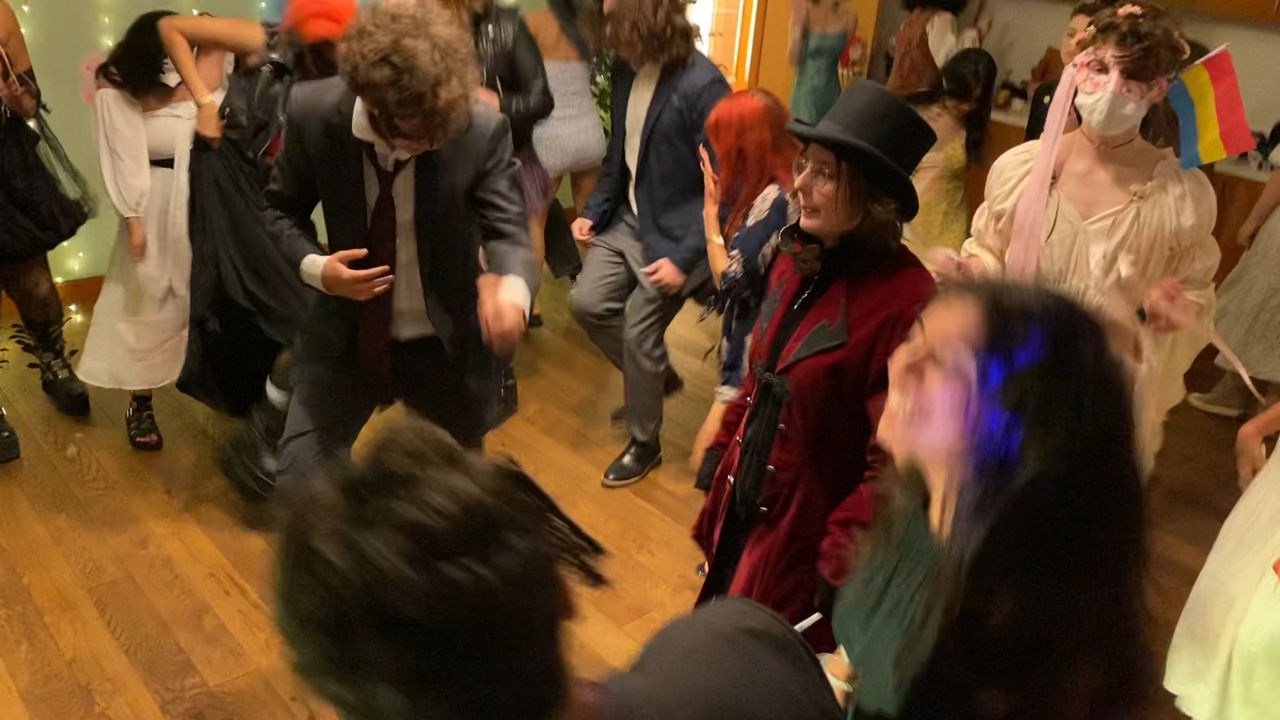 Fake moss, rainbow colored felt roses, tea lights and reels of ribbon were scattered across the floor of the Annenberg Beach House in Santa Monica. The high school students were preparing for Queer Prom, a prom for LGBTQ+ youth and allies.


Roger Gawne was deep in concentration, cutting out circles of fake grass to glue onto mason jars. Gawne is the outgoing co-president of the Santa Monica High school Gender and Sexuality Alliance, which put on the prom along with The Church in Ocean Park — an interfaith group hosted by the United Methodist church — and The City of Santa Monica Travel and Tourism. Back on The Beach Café provided food and donated dinner for everyone attending.

The Queer Prom has been held for the past 10 years, but Gawne, who is transgender, noted that this year’s prom was more significant than ever before.

"After this year and a half, it’s especially important that we are able to come together in community for all of the LGBTQ community in the area, but especially for our youth," said Gawne. "We’ve all been stuck at home, and for a lot of queer youth, that means being stuck with parents and family who they might not be out to."

The prom is spearheaded by Samohi GSA, but they open it up to anyone in Los Angeles. Many teenagers come from other LA high schools. Tickets sold out quickly once they went up online, and over 150 people attended.

Gawne also went to the Samohi prom but said events like typical high school proms can be uncomfortable for some queer youth.

"We’re seeing situations where [proms] are still based on the heterosexual norm and a cisgendered norm," Gawne said. "And this is an event, like all pride events, where it’s like, this is who we are here, together with people who are like us, with our community."

While Gawne and the rest of the GSA finished decorating the event space, other attendees got ready at home. Erick Pelletier-Hague, another recent Samohi graduate, had bought a special outfit for the occasion — a steampunk style suit and a top hat. Pelletier-Hague came out as transgender earlier this year, and this was one of the first times he wore a suit to a formal event.

"I didn’t want to stay in the closet and pretend I’m a woman because it would have been weighing on me after a while, like a big secret," he said. "That slowly manifests into this ball of anxiety."

Pelletier-Hague was excited about the prom and his outfit, which included a velvet red coat, but there were some nerves as well.

“It’s going to be funny to walk in and have people see this and a top hat,” he said.


Once Pelletier-Hague arrived, he fit right in alongside other people dressed up as fairies, princesses and all sorts of magical creatures. Even the chaperones dressed up.

Herley Jim Bowling has been chaperoning Queer Prom for several years. He serves as congregant at The Church in Ocean Park and co-chair of church programs. He was dressed in a long flowing red skirt with a rainbow sash tied around his waist. Bowling is gender non-conforming and explained that as an adult, he was inspired seeing young people express themselves so freely.

"It’s fabulous to get to see them, getting something that I didn’t necessarily experience growing up, and I think that’s so wonderful," Bowling said. "I am celebrating them. I am so happy they’re getting to do this."

After all his hard work, Gawne also enjoyed the evening. He had a quick change between prepping decorations and coordinating logistics, and emerged in a suit and rainbow masquerade mask.

“I’m just so glad people can have this opportunity to be as authentically themselves and joyfully themselves they can be and love proudly, and with joy.”