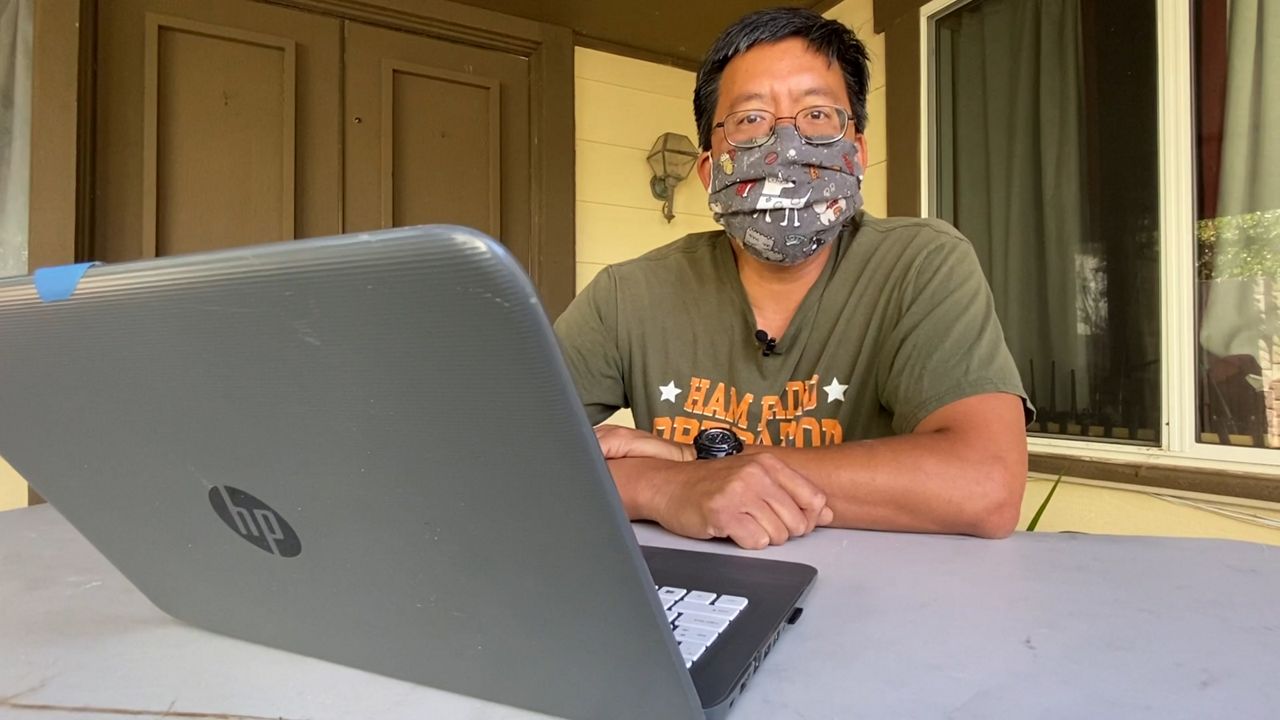 Ben Kuo, of Newbury Park, used websites like Google Earth and EO Browser to help locate Rene Compeon, who was lost in the Angeles National Forest.

NEWBURY PARK, Calif. — From ham radio operator to amateur beekeeper, Ben Kuo does a little bit of everything.

“My wife says I have too many hobbies so there we go,” he laughed.

But one thing he does every single day is something he calls “satellite surfing.”

Using websites like EO Browser, he travels the globe, from Venice, California, to Venice, Italy. “You can look and see what’s going on in the world no matter where it is,” he said. “It’s kind of fascinating what you can see.”

Kuo loves to use satellite imagery to try to pinpoint exactly where scenes in his favorite TV shows were shot. The Jedi temple in “The Mandolorian,” for example, looked pretty familiar, so he started searching. Turns out it was in Simi Valley — hardly a galaxy far, far away from his home in Newbury Park.

“It’s kind of trivial but I love doing it,” Kuo said, adding, “In this case it was more useful than trivial.”

He’s referring the case of the missing hiker — Rene Compean — who got lost this week in the Angeles National Forest. With poor reception and limited power in his phone, Compean was able to send one photo to his roommate, hoping to give a sense of his location. The Los Angeles Sherriff’s Department tweeted out the image — showing Compean’s legs with a canyon below — and the clue was too good for Digital Detective Kuo to ignore.

Are You an Avid Hiker in the Mt. Waterman Area? #LASD SAR Teams need help locating a #missing hiker. He sent this picture to a friend. His car was found near Buckhorn Campground/Trailhead. Call us if you recognize the area pictured below 818-248-3464. https://t.co/Xi0VL6Mxfi pic.twitter.com/1lUMrgj4y9

“Actually, I looked at the picture and I said, ‘I bet I can find where this guy is,’” he said.

Using websites like Google Earth and EO Browser, and calling on his own knowledge of hiking and trails in the area, he began to zero in on Rene’s location.

“This is what I used to figure out where he was,” he said, showing various satellite images on his laptop. “You can look at the pattern on the ground and say, is he on the north side or the south side of the Angeles Crest.”

Kuo also uses his hobby to help track wildfires, so when he noticed the black smudges on the hiker’s legs, he knew he was likely in the area that burned during the Bobcat Fire.

“This is like a jigsaw puzzle,” he said of his satellite sleuthing. “This is where you say, ‘hey, what does it look like? Where does it fit?’”

It took Kuo only about 20 to 30 minutes to find what he felt confident was the location. He notified the Search and Rescue team which, of course, had to vet the information.

“Having a random internet person say, ‘hey this is where he is’ is not something you go and say ‘Hey, I trust it!” he laughed. He thinks it helps that he has more than 20,000 Twitter followers — lending him enough credibility for his suggestion to be taken seriously.

Ultimately, the Los Angeles County Sheriff’s Department Search and Rescue Team followed the lead, finding Compean less than a mile away from where Kuo said he would be, and hoisting him to safety.

When he learned how he’d been located, Compean was floored.  “I was like, ‘wow!’” Compean said. “I didn’t realize somebody had a hobby doing stuff like that. I owe him my life and everybody else that was involved in helping.”

With all his hobbies, Kuo sees himself as a lot of things, but hero isn’t necessarily one of them. He’s just glad he was able to catch the right wave and use his satellite surfing to bring a stranger to safety. “It’s just very gratifying to know that someone is around and alive because of you sitting behind the computer and saying, ‘hey, I think I can figure out where he is.’”

Kuo’s advice for hikers? Make sure you know how to find and relay your exact GPS location. He suggests using the compass app in your phone or a website called FindMeSAR.com. “If you give them your location,” he said, “they can just go there and get you if you are in trouble.”