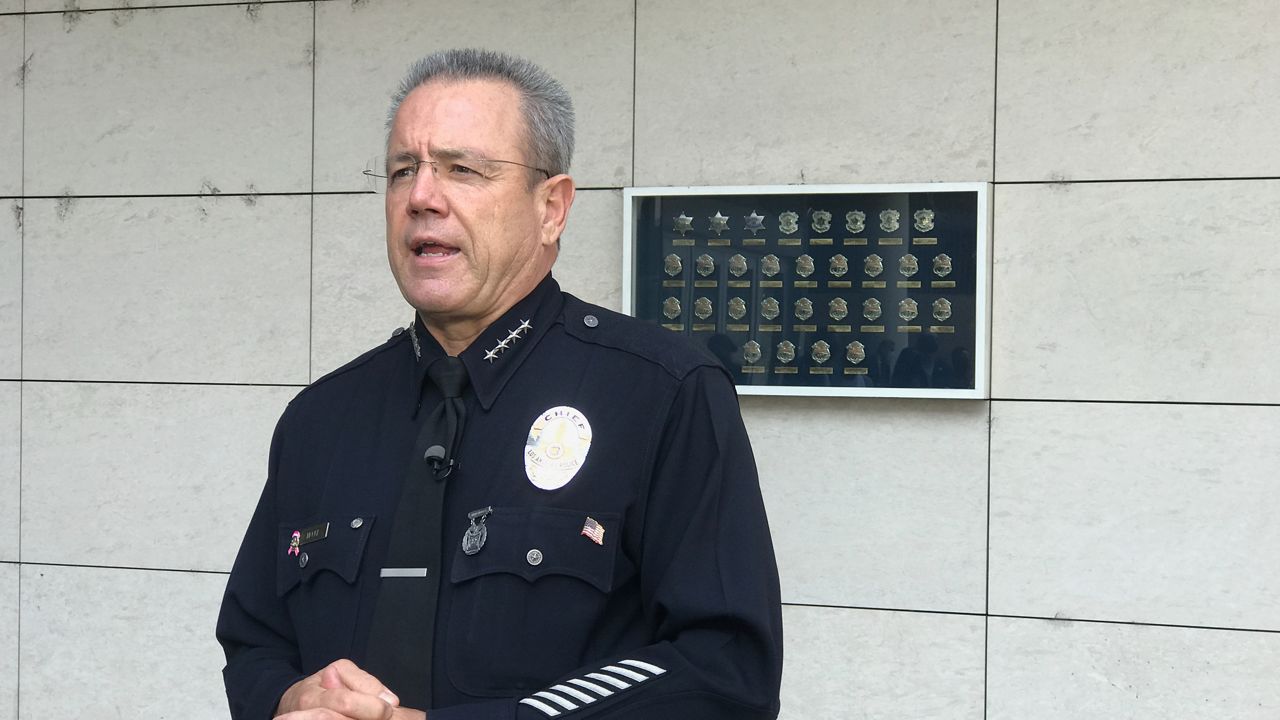 EDITOR'S NOTE: This is a collaboration between digital journalist David Mendez and anchor/multimedia journalist Kate Cagle. Click the play button above to watch the video report that accompanies this story.

The department will also restore his status as an officer, then subsequently offer him an honorable posthumous retirement — gestures he never received in life.

“This organization’s had a number of firsts, a number of sacrifices," Moore said. "This small gesture, of his restoration, his retirement — honorably — and the naming of this roll call room is just one page of our history."

The roll call room is the first place officers report as they begin their shift and prepare to patrol their beat.

“To me, it speaks to his service in the downtown core, into what was historic L.A. and today, as these officers come out of Central Station," said Moore. "They’re walking the same streets. They’re on the same corners he stood."

Moore’s announcement comes following a Spectrum News 1 story that examined Stewart’s life and heard calls from historians for LAPD to properly recognize Stewart as a trailblazer.

Stewart was born in Kentucky in 1850, as the enslaved son to enslaved parents. After emancipation, he and his wife joined the great post-Civil War migration west, eventually settling in L.A.

Alongside Joseph Green, Stewart was one of two Black men hired to LAPD in 1889. While Green’s career ended after one year due to layoffs, Stewart policed until 1900, mainly in the city’s downtown core. He was renowned for his policing ability, physical strength, and strength of character. News articles of the time lauded his ability, as well as his strength and stature: One clipping reported that Stewart stopped a runaway mule team by himself, bare-handed.

Reports from the time worked in digs at his race (describing his dark skin, his “hard African skull,” his “Ethiopian heels”) but cheered his unimpeachable character.

Then, in 1900, a white 15-year-old girl told police that she met Stewart late one night as he walked his beat, that he took her behind a school, raped her, and left her there. The next day, as Stewart prepared to go on patrol, he was arrested by his colleagues at the police station. While Stewart awaited trial, the city’s Police Commission circumvented due process and stripped him of his badge.

On December 31, 1900, Stewart was acquitted of rape charges and walked free — but never regained his policing job. He died in 1931, spending the last decades of his life as a custodian and a laborer. Black newspapers, like the California Eagle, remembered him with broad headlines and kind obituaries. In the mainstream press, his name was but a note on the death registers of the day. For decades, his story was forgotten.

Over the years, LAPD historians tried to dig deeper into Stewart’s history but ran into pre-digital age roadblocks. In 2015, historian Mike Davison stumbled across Stewart’s name while on another research project and dove into the rabbit hole. When he emerged, he had developed a more precise picture than any before of Stewart’s life and times.

But what Davison sought most was for LAPD to correct its own records of Stewart, including his hiring date. For years, the department’s website asserted that Stewart was hired in 1886.


Moore told Spectrum News 1 that he’s very familiar with Stewart’s story. He said the department had publicly discussed plans to honor Stewart as recently as January until the pandemic ground the world to a halt. Moore recognized the unique situation that Stewart was in as a Black police officer during a time when white colleagues and citizens ignored and mocked him. He described Stewart as a “trailblazer” for the Black men and women that have followed him.

"This is a department that is a minority-based department," Moore said. "African-Americans, Asian Pacific Islanders, and Latinos — each of these groups have had challenges they’ve had to face, the prejudice and racism of this society. Each of our communities have seen … this discrimination that they’ve experienced. But I’m proud of this department, that we welcome them into us as full-authority members.”

Moore said that the department has a commitment to recognize the mistakes in its history and not repeat them.

“What the story of this organization needs to reflect is that we’ll make mistakes, we’ll fall short,” he said. “We’re part of the American society — the greatest democracy in the world, but (it) has its flaws. The question is, what do we do with those flaws? We learn them, we know them, and we become aware.”