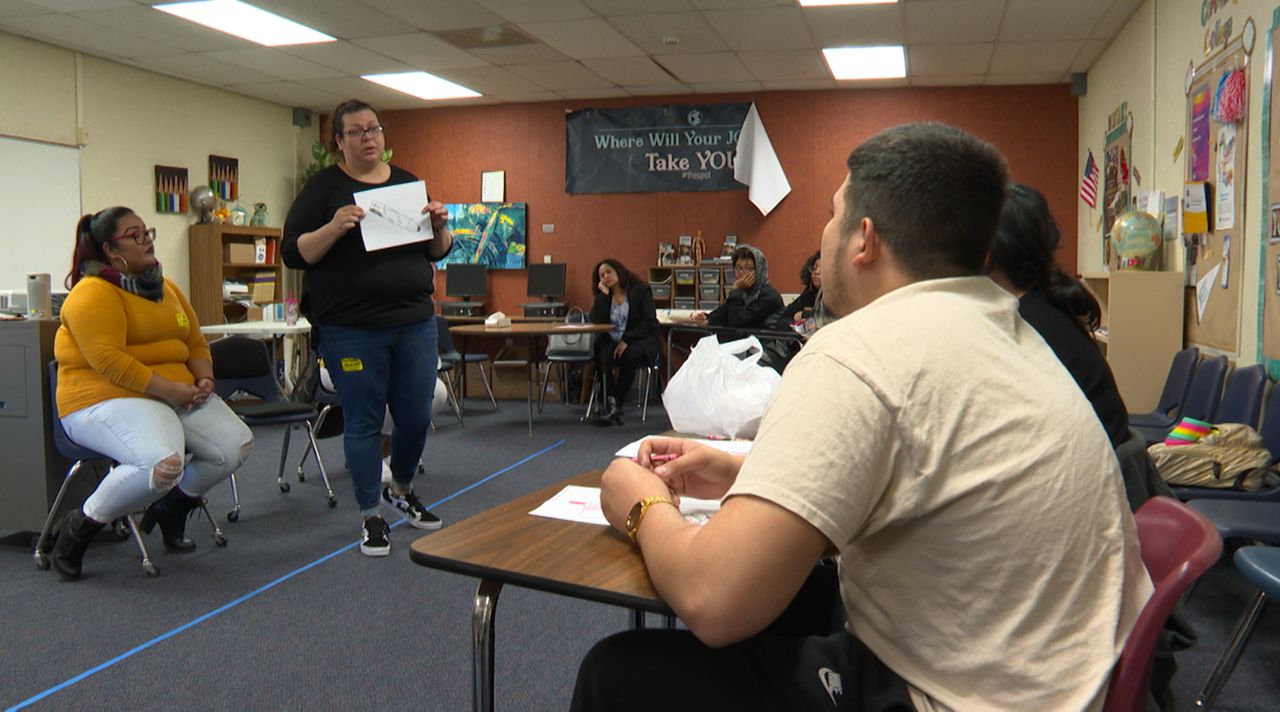 MORENO VALLEY, Calif. — While many people can recall a 2007 film titled Freedom Writers starring award-winning Hilary Swank, many don’t know the story is based on a real teacher and real students.

For years, the teacher, Erin Gruwell, and her students have traveled the country speaking to people about their experience, how they have overcome obstacles and how they can help change lives if given the opportunity.

Gruwell and her former students and members of the Freedom Writers Foundation visited campuses in the Moreno Valley Unified School District for months. One of their last stops was March Mountain High School. They held an assembly and met the campus body of students, and held a private workshop with students who are part of the peer leadership class.

The district was chosen to host the Freedom Writers because Superintendent Dr. Martinrex Kedziora went through a training conducted by the foundation and was named a Freedom Writer Teacher.

“When I see these kids, I don’t see their records. I don’t see what they look like. I don’t see anything on the exterior. I will get to know them more personally,” says Sue Ellen Alpizar, a Freedom Writer.

Alpizar was one of more than a hundred students who met Gruwell when she took a job student teaching at Woodrow Wilson High School in Long Beach in 1994. During her time there, Gruwell found she changed not only her life as someone who grew up in Newport Beach, but also those of the 150 students that passed through her classroom.

Gruwell exposed her students who unique lessons including something called the line game. It’s an opportunity to become more familiar with the class and students. The activity enables a teacher to solicit information from their students that they may not feel comfortable sharing with a teacher. Alpizar and a couple members of the foundation used the line game to gain insight on what some of the students are going through or have experienced.

The workshop is private and what is said in the room stays there because the students open up about traumatic experiences like suicide, violence, abuse and their lack of self-confidence. To reassure the students, Alpizar and the other workshop leaders use their personal stories in hopes to let students know that they’re not alone and there are people who believe in them.

The goal is to get the students to share their stories, understand that there are others out there who are either experiencing a similar situation or wants to be there for them. Ultimately, the foundation encourages the students to write down their feelings, share them and use education as a gateway.

“For us, education was that tool for us to achieve our dreams. We want to show them that with the power of education, they can break the cycle of abuse, poverty and of everything that they don’t want to live with anymore,” says Alpizar.

Alpizar and Gruwell’s other students graduated from high school and all went on to rewarding careers. Alpizar hopes that her story will help students who feel like they’re alone see that they can use education to rewrite their story with an ending they’d be proud of.

For more information about the Freedom Writers Foundation, visit the website here.