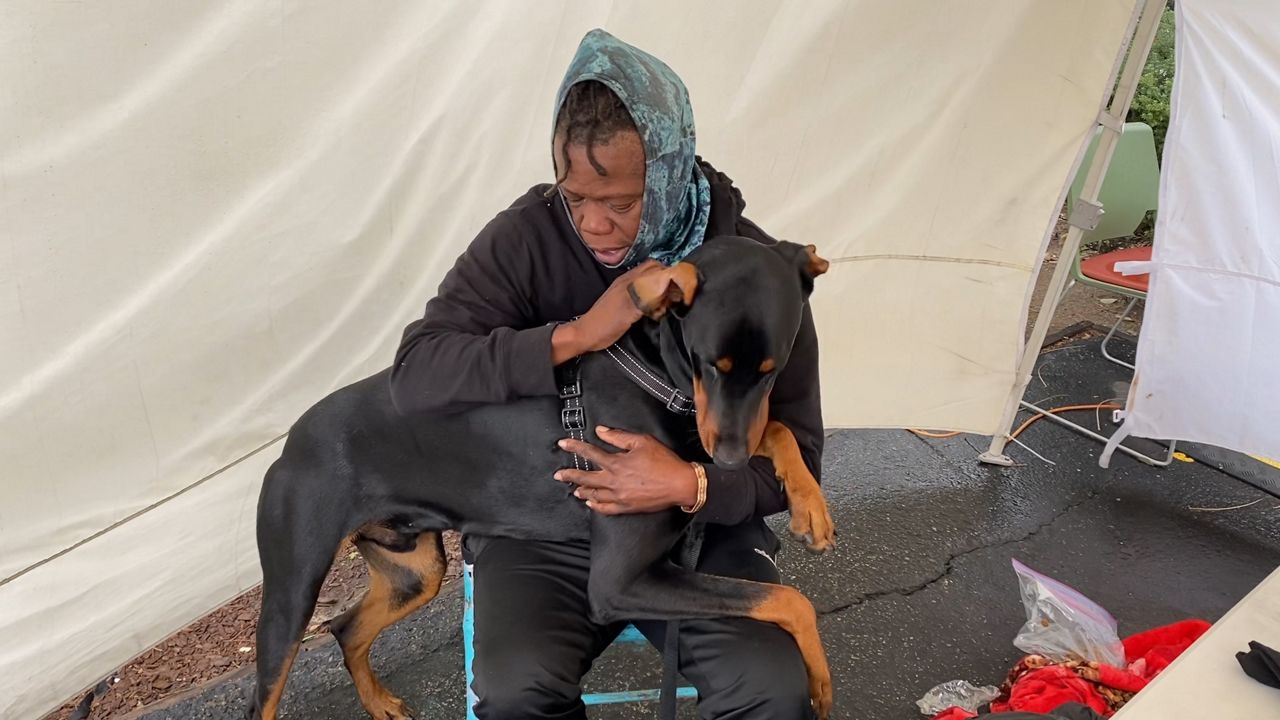 For Justice Holmes and her Doberman, Onyx, home is a tent downtown on San Pedro Street. (Spectrum News 1/Chace Beech)

'We have to do it all': Assemblyman on housing LA's homeless

LOS ANGELES — For Justice Holmes and her Doberman, Onyx, home is a tent downtown on San Pedro Street.

Holmes has been homeless for 10 years, and a recent rainstorm forced her to seek cover at the Downtown Women's Center. Her tent had been washed out, and she was waiting at the center for clean clothes and toiletries.

Holmes, who is dealing with addiction and has been in prison, came to Los Angeles initially for a relationship that ended.

"Once that finished I came to Skid Row and like everyone else got lost and stuck and becomes a product of their environment," she said.

Holmes has had experiences with housing units before that haven't worked out, but Holmes found a new purpose after adopting Onyx.

As Holmes waited to receive services at the center, upstairs state and local politicians discussed how many Angelenos have become homeless.

The Homelessness Select Committee Hearing was held by its chair, Assemblyman Miguel Santiago, D-LA. For several hours' representatives from the state Assembly, city council members and homelessness providers gathered to have a frank conversation about what has failed in Los Angeles and what has worked.

It began with impassioned remarks from several members of the committee.

"If you ask any resident, any stakeholder, if they believe that homelessness has had a dink, or any sort of improvement, or we have begun to solve it. They would think we had been doing something more than drinking, that we are delusional," Santiago said.

Others, like Assemblyman Mike Gipson, D-LA, touched on their personal connection to the crisis.

"My godson is homeless. My godson is on crystal meth. My godson will end up on my door at any moment. This situation is absolutely real," he said.

The day was broken up into panels to facilitate conversation between entities and representatives who don't often meet face-to-face.

Santiago called upon all speakers to be clear about improving services.

"Where the state has not met its expectations, say it…The focus today is about housing and shelter…We're all part of the problem," he said.

Much of the discussion focused on how decentralized the city's approach to homelessness has been. In an interview, Councilwoman Nithya Raman, who spoke during the hearing, said that each district has its own approach creating confusion.

There was also a discussion about mental health and its impacts on LA's homeless. Gipson said that some of the state's budget should be used for a more comprehensive approach.

"We can make sure those who are having real mental illness, get the kind of wrap around services from qualified experts in this space."

But across the board, the primary topic centered on housing and how best to get Angelenos off the streets.

"We have to do it all, tiny homes, shelters, permanent supportive housing, rent vouchers adaptive reuse, it all has to be on the table," Santiago said.

Housing is top of mind for Holmes, too, and for the thousands of homeless people living on LA's streets. She feels a roof, and a door would give her a chance to find work and support for her addiction.

"I really would like housing and a way to keep it going to enter back into society as a productive member," Holmes said.