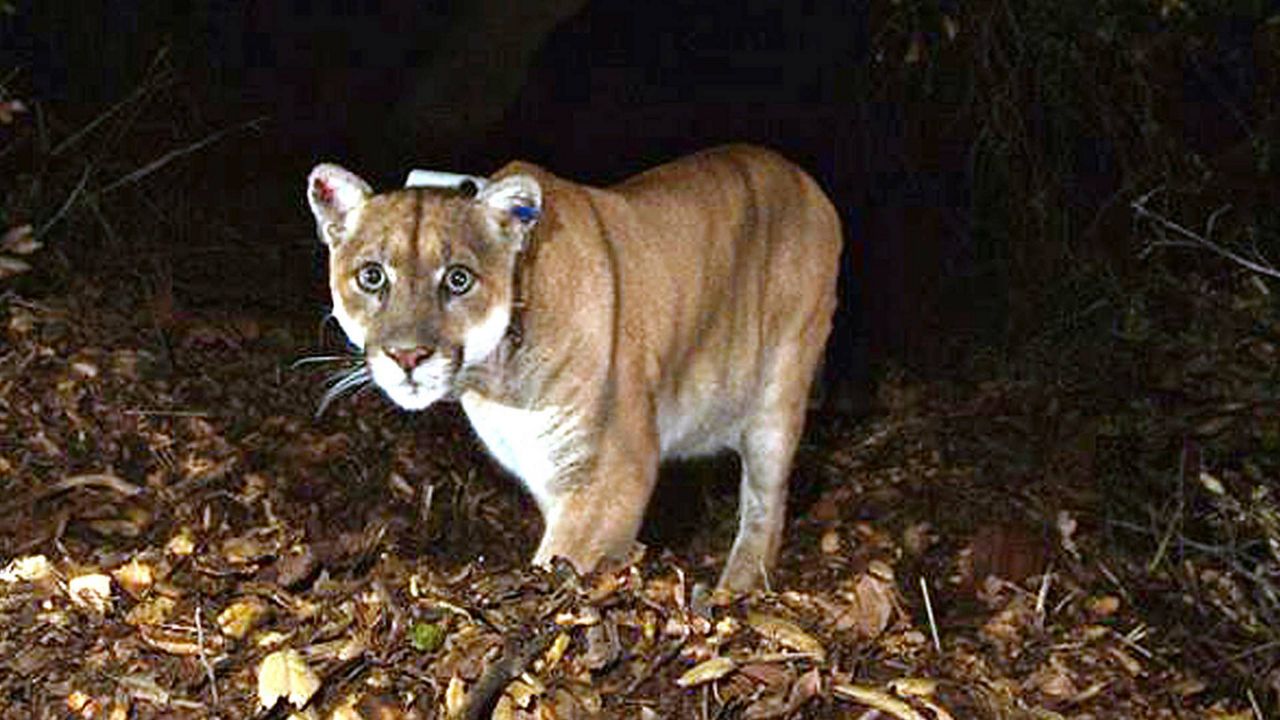 LOS ANGELES — It’s not the paparazzi snapping celebrity pics all over the Hollywood Knolls these days. It’s security cameras.

“Right over the garage,” Kathy Valentino said as she pointed out one of her two Ring cameras.


Valentino has lived in the area for 11 years and says she starts each day by picking up her phone to check the overnight footage. It’s always the same: skunks, raccoons, coyotes, sometimes even packs of them. But then suddenly, a few weeks ago, her fingers came to a sudden stop.

“He was right there,” Valentino said. “Beautiful.”

P-22, the most beloved bachelor this side of Barham Road, had graced Valentino’s driveway, slowly sauntering down the sidewalk past recycling bins and parked cars.

Since Valentino was already holding her phone when she made the spotting, her next move was a tap away.

"I immediately got on Nextdoor, had to show all the neighbors," she said with a chuckle.

The cougar came back again a few days later, traveling just as casually in the opposite direction. In fact, for a few weeks in November, Valentino says, P-22 was being captured on camera nearly every night, with neighbors tracking his moves on social media.

The National Park Service has also been tracking P-22's moves for a decade and confirmed the photogenic cougar was in fact the famous feline.

“We determined it was P-22 because his GPS radio-collar sent us locations of him in the general area on the day and time the video was taken,” said Public Affairs Officer Ana Beatriz Cholo of the National Park Service in a statement.

Cholo added that P-22's appearing in the residential area is not unusual.

“Griffith Park is a large urban park surrounded by residential neighborhoods,” she wrote. “This area is his home, and it is not uncommon for P-22 to sometimes venture out into urban areas that surround his more natural habit.”

But perhaps no one tracks his behavior or whereabouts closer than Beth Pratt of the National Wildlife Federation, who is arguably his biggest fan. Dressed in a P-22 holiday sweater, its long sleeves covering her detailed P-22 tattoo, she said the reason neighbors are seeing more if him has more to do with technological changes than behavioral ones.

“More people have Ring cameras,” she said. “These animals have always been in our backyards. It’s just we now have these incredible security cameras that pick up everything.”

What Pratt appreciates most about the social buzz he’s generating is that the posts are all so positive.

“Everybody puts the risk in perspective,” she said. “I love that people celebrate that this is really special. You have a mountain lion roaming around in the second largest city in the country, and that they want to be good neighbors to him.”

Valentino worries, though. Cars don’t always stop at the signs, and at 12 years old, P-22 may not be as adept as avoiding traffic as he once was.

“It’s kind of scary because we don’t want anything to happen to him,” she said. “So as exciting as it is to see him down here on streets like this, we really want him up further, a little safer on the hill.”

Pratt worries about him, too.

“I worry about P-22 and all these mountain lions every day because every time there is a death or an injury, it breaks my heart,” she said.


But Pratt added that even though P-22 is no longer a spring kitten, she thinks the videos show P-22 is in great shape for his age.

“I think he’s aging like Brad Pitt,” she said with a laugh. “Very well!”

That’s partly due to P-22's isolation. Unlike other mountain lions, he doesn’t have to constantly fight to defend his territory. Because of that, Pratt thinks he may defy the odds and live quite a bit longer than the average lifespan of a cougar in the wild.

Having finally captured the local celeb on her camera, Valentino is thrilled to be part of a club her neighbors have been in for some time.

“It’s an honor in this neighborhood to be visited by P-22,” she beamed. “He’s like our mascot. We love that we can live here and have these beautiful animals amongst us.”

As for famous feline himself, P-22 seems perfectly comfortable with the security paparazzi — just no autographs, please.