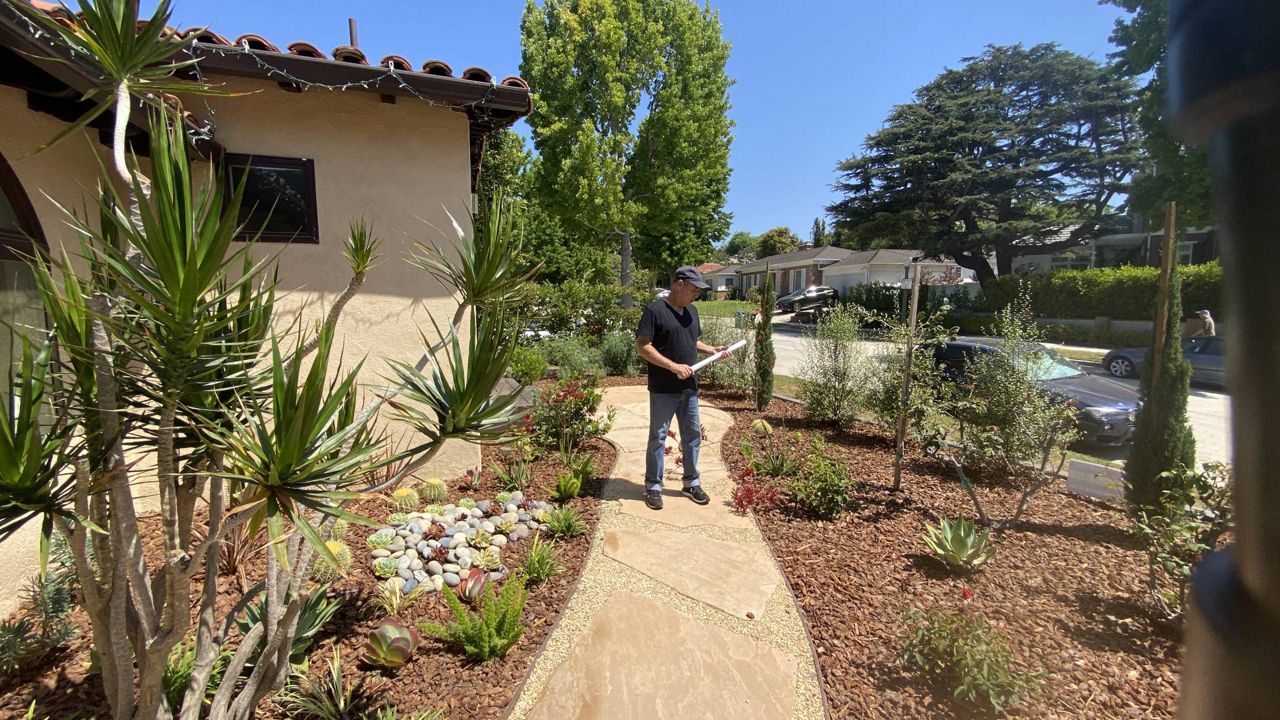 SoCal has water reserves that will last through this year, beyond

LOS ANGELES — One of the keys to solving the effects of severe drought in California by keeping the water supply high is drought-tolerant landscaping.

Jerry Kohn, CEO of Edify Landscape Design, said it makes all the difference in conserving water compared to grass yards.


"It's cutting down on the usage anywhere from 30% to 50% for most everyone who is using this process," Kohn said.

Kohn and the Metropolitan Water District's turf replacement program have partnered to offer a rebate when homeowners remove their existing grass and switch to this water-saving alternative.

"It affords people the opportunity of re-landscaping their property and being able to get a part of that financial equation cut down," Kohn said.

California is facing one of the worst droughts in history, with reservoir levels at near-record lows and the governor asking all residents to reduce their water usage by 15% voluntarily.

Climate change is only expected to exacerbate this problem in the future. Everywhere is feeling it, except for Southern California. And removing thirsty lawns is what Brad Coffey, Metropolitan's water resource manager, said is a conservation success story.

"People responded to the public message to use less water out of doors, and they found that their lawn and their outdoor landscaping still survived," Coffey said.

Water conservation, plus investments in infrastructure, are reasons why Southern California is water reserve-positive. The construction of Diamond Valley Lake in Hemet more than doubled the amount of water storage, and water recycling allows residents to use the precious resource more than once.

"That also helped build our storage reserves, so the water you're not using today can, in essence, be banked for tomorrow for a dry year just like now," Coffey said.

Water recycling is a necessary part of our future. At the Los Angeles County sanitation site in Carson, Metropolitan has made a major investment to take it a step further. The Regional Recycled Water Program is a demonstration facility that could become one of the world's largest advanced water treatment plants.

Coffey explained that they're purifying water currently sent to the ocean to become a new potable water supply for Southern California.

"These next steps are to treat the waters so that we can apply it into the groundwater basins, so it can then be used as drinking water and pulled out by drinking water wells," he said.


Once wastewater has been cleaned and treated, it flows to the advanced water treatment plant, where it's further purified using a three-step process. The water is then safe to reuse again, replenishing groundwater basins and helping ensure water reliability during future droughts.

Ramy's Nursery in Reseda is one of Kohn's plant vendors, where the drought-tolerant flora seems endless. Owner Tom Cohen's father began the business decades ago, and it's had to shift and adapt due to drought.

"I mean, if you came here 10 years ago, I used to have palms and tropical stuff like everywhere," Cohen said. "I don't even think I have a palm tree unless it's a desert palm in the yard right now. That's how much it changed."

Where dry conditions and hot temperatures are only expected to continue in the future, Kohn feels he's doing his part by facilitating changing habits through his landscape design, helping homeowners around the Southland conserve their water.

"When I do landscaping, whether I'm doing turf replacement or not, I only use drought-tolerant plants," he said.

Grass lawns may become a thing of the past, but for a good reason, helping keep our precious water supply replenished now and into the future.