Energy Observer, a former race boat turned into autonomous navigation with hydrogen, sails off the coast of Long Beach, Calif., after a month sailing from the Galápagos islands, April 22, 2021. (AP Photo/Damian Dovarganes)

Ship of the future docks in Long Beach, leads Maritime shift to renewables

EDITOR'S NOTE: To watch the video report that accompanies this story, click the arrow above.

LONG BEACH, Calif. — The future is difficult to predict, but a boat that just docked in Long Beach is setting course on one potential path.

Powered with solar panels, wind and hydrogen generated from seawater, the Energy Observer — as it’s called — is entirely self-sustaining. It doesn’t use diesel or generate emissions. All the energy it needs is produced on board.

“The idea is to show that it works,” said Laurene Blotterre, communications director for the Energy Observer and the French team that created it. 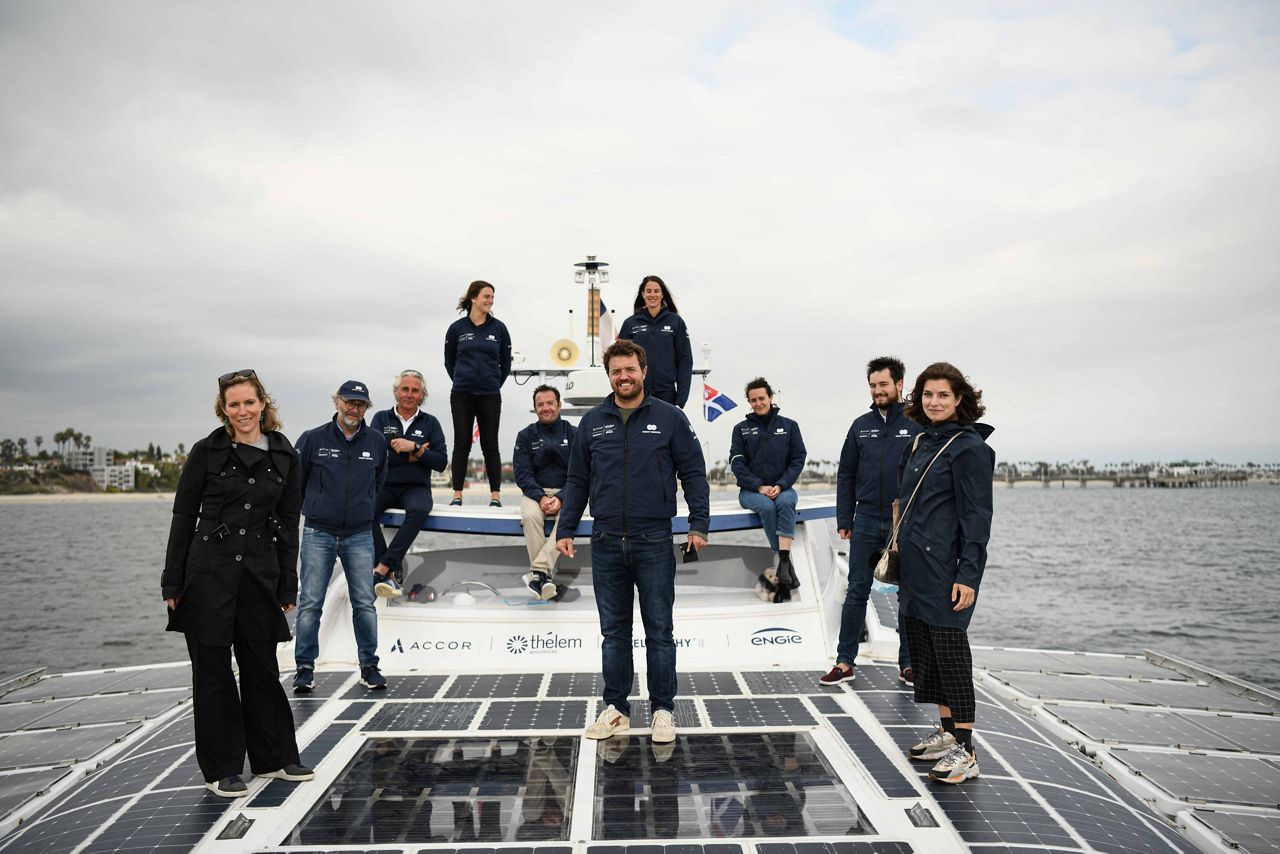 The first vessel of its kind, the Energy Observer is making its U.S. debut this week. It docked in Long Beach on Earth Day following a month-long sea passage from the Galapagos Islands — one of 65 stopovers the catamaran has made four years into a seven-year, round-the-world exhibition. So far, it has traveled 30,000 nautical miles self sufficiently.

A floating laboratory that’s testing renewable technologies from companies large and small, the Energy Observer generates electricity using three types of solar panels covering every surface that receives sunlight. Among the 663 square feet of solar are flexible, textured tiles that can be walked on and two-sided panels that take in rays from the sky, as well as sun reflected from the water. 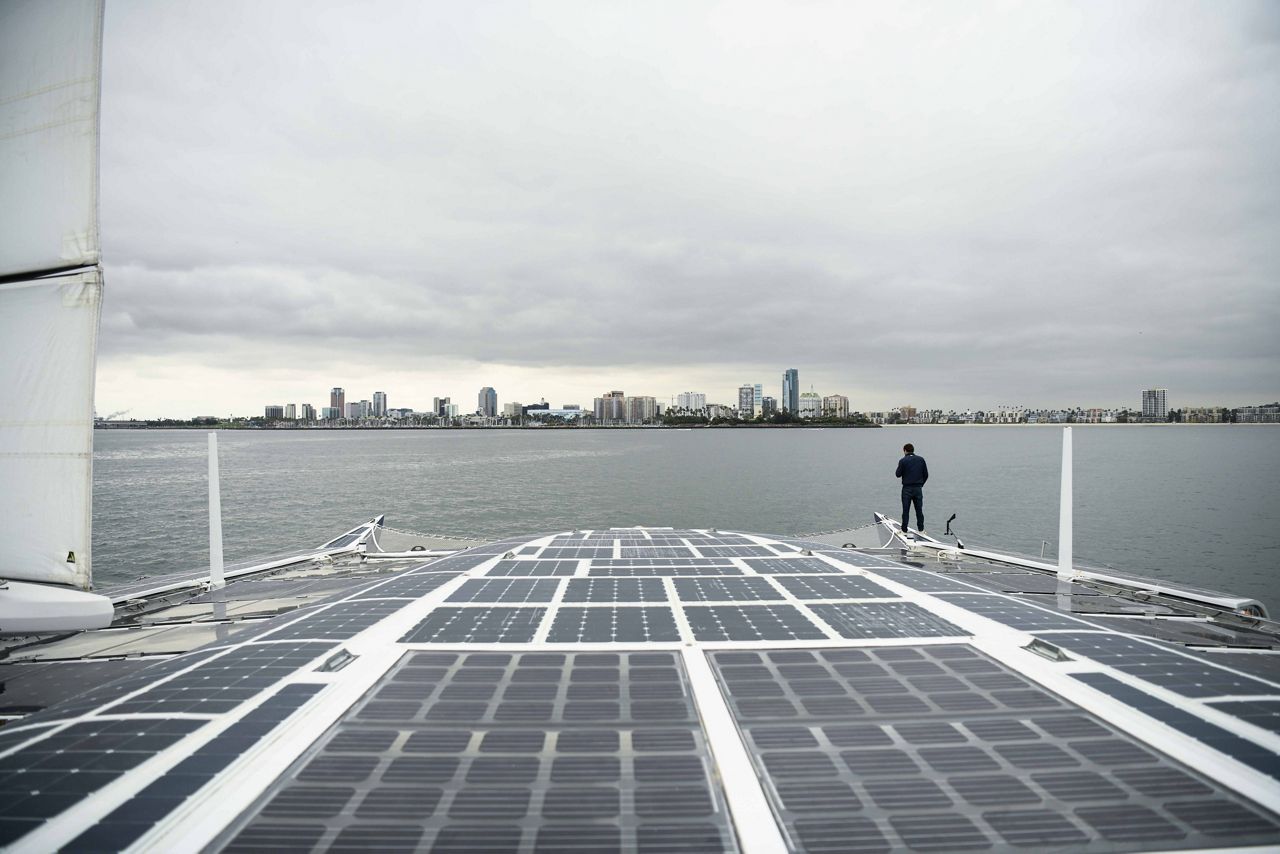 Wind not only helps propel the boat with a pair of sails, or ocean wings, as the team calls them. It also helps generate electricity. That energy is stored in batteries to be drawn upon when needed, as is the hydrogen gas that generates energy with a system of fuel cells.

“Hydrogen has an interesting unifying role in the boat,” said Keith Malone, spokesman for the California Fuel Cell Partnership, a public-private partnership that promotes hydrogen vehicles in the state. Not only does the boat use an electrolysis system to generate renewable hydrogen from sea water, it captures whatever excess energy is not being used for propulsion and gives it back to the batteries.

“Hydrogen has been described by many as a unifier for the renewable future. It’s able to link renewables in a way that most other things can’t. That’s very significant, so this boat really showcases that,” Malone said. “Plus, it’s just super damn cool.” 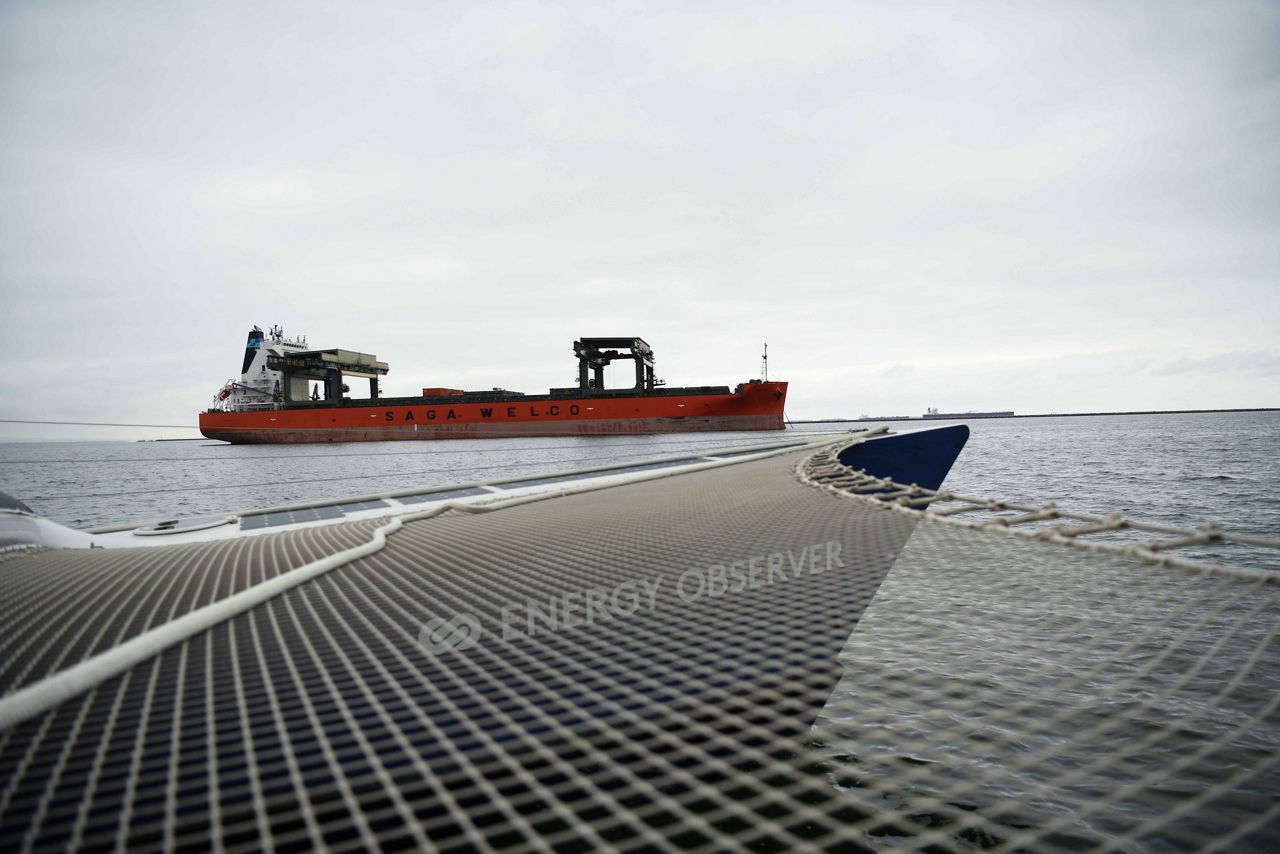 The Energy Observer partnered with Toyota Motor Corp. to use the hydrogen fuel cells the auto maker originally developed for its Mirai sedans, but many of the other companies it has partnered with to test renewable technologies in a maritime environment are European, including the Italian solar panel company Solbian and the French hydrogen gas services company Air Liquide.


“For me, hydrogen is the solution to reduce our CO2 emissions,” said Victorien Erussard, the Energy Observer’s founder and captain, adding that he believes in the technology for trains, planes, trucks and cars, as well as boats.

Electricity generated from renewable hydrogen emits nothing but water and warm air. A former race skipper and marine officer, Erussard started working on the Energy Observer in 2013, when the diesel-powered generator on his boat went out in the middle of a race. So he hung up his racing hat and recycled his catamaran to embark upon a new journey: developing the future of the maritime energy transition.

Boats of all kinds are a major contributor to climate change. If shipping were a country, it would be the sixth largest emitter of greenhouse gases, Goldstein said. The shipping industry is currently responsible for 3% of global emissions, a number that is expected to grow to 18% by 2050.

The Energy Observer leaves Long Beach for San Francisco on Thursday, after which it will head to Hawaii.