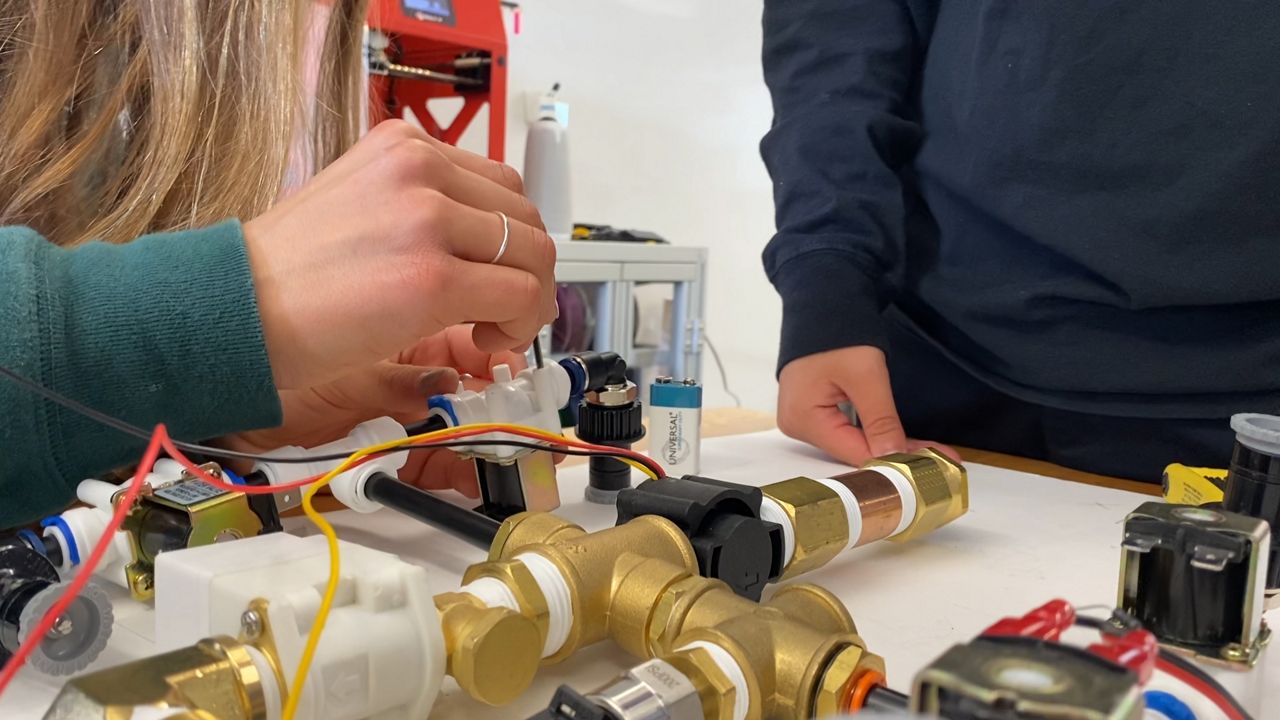 BRENTWOOD, Calif. — During a typical lunch hour at the Archer School for Girls in Brentwood, you'll find students running through the halls, now that they're back on campus. But for senior Gabriela Ayala, lunchtime isn’t an opportunity to relax. Instead she focuses on more weighty matters, like the future of fire safety.

The 18 year-old is a member of  Archer’s Engineering and Invention Club, which she joined because it brought two of her passions together.

“I love hands on work, and it’s where creativity meets that. Invention is based on helping people and finding creative solutions to do that,” Ayala said.

From the start, Ayala and the rest of the club had big ambitions. Two years ago, they started brainstorming about a way to solve one of LA’s biggest problems: wildfires.

Archer has been impacted by fires in the area several times. Ayala remembers being evacuated during 2019’s Getty fire.

“We couldn’t return to school for about a week because our campus was covered in ash,” she said.

They came up with an idea: smart sprinklers.

They envisioned a system that would be able to detect embers and spray water out to stop fires from starting. The students got to work writing up a proposal for the project and decided to name it "Hydra," after the deadly mythological water monster with many heads.

In order to make their invention a reality, the group needed some extra support. They applied for a prestigious grant from the Lemelson-MIT program. It’s an initiative that awards students $10,000 to work on technological solutions to real world issues. The Archer team received the grant and became an official Lemelson-MIT InvenTeam.

With the money, they were able to get to work engineering their impressive prototype.

The sprinkler is designed to sit on top of a house. Two built-in infrared cameras remain on at all times and can see embers in the area. The Hydra code determines where the mechanism should direct water and the sprinkler puts flames out before they land on the roof. It’s an elegant solution that requires considerable work.

Much of Hydra is built in-house at Archer’s Idea Lab. During the group’s lunchtime meeting there’s a cacophony of chatter and conversation about different elements of Hydra. Tenth grader Lily Prokop works on designing a stabilizer in a 3D printer to help control the amount of water that gets released. While 9th grader Maya Alvarez is focusing on designing and programming the Hydra App that will accompany the product.

“Soon you’ll be able to email our technical support, and look at a 3D model on the app,” Maya said.

“I’m the leader of budgeting and CAD modeling, CAD stands for computer aided design… engineering works on the inside and we work on what’s on the outside,” said Karen.

Mike Carter is the Engineering and Design coordinator at Archer and oversees the Hydra project. Carter says Hydra is much more than a school experiment.

“This is major interdisciplinary engineering. I think too often students are told that they are too young to do something meaningful or that they don’t know enough. One of the strengths of the Lemelson-MIT program,” he said, “is that it provides that inspiration for students to know that what they’re doing can matter and can make a difference.”

For Carter, seeing this group come together to create Hydra, even in the midst of the pandemic has been inspiring.

“It requires the mechanical design of the plumbing system to knock down embers. It requires the control software to actually be able to find them using infrared cameras. All these students are coming together to work together and they’re learning enough about each other’s areas to be able to communicate and make an integrated project,” said Carter.

The InvenTeam will present the final prototype at a conference in a few weeks. The students have a patent for Hydra in the works and have been in conversation with the LA Fire Department about testing it in the real world.

“We’ve been working on this for two years, so I’m excited to see it complete, but I am going to be a bit sad about Hydra being done,” she said.

But Ayala says, more than anything, she’s proud of the group, for creating something that can be useful to Angelenos and their own high school.

“Invention is based on helping people, and finding creative solutions to do it,” said Ayala.