Eric Junker is a Silver Lake artist and creator of the Resist Hate! posters now being used during the George Floyd protests. (Spectrum News/Susan Carpenter)

LOS FELIZ, Calif. – With many of its businesses fronted by plywood, the 4800 block of Fountain Avenue looks like a lot of the city these days. Its glass storefronts and signs are hidden, as business owners hedge their bets against looters that have ravaged Los Angeles following citywide protests of systemic police brutality.

But a sign of peaceful defiance is emerging on those same boarded-up storefronts in an unavoidable, in-your-face red: “Resist Hate!” That’s the message of a grassroots poster art movement spreading from Burbank to Hancock Park to Los Feliz, where the artist who created the image was fast at work Thursday night, using a paint roller and wheat paste to adorn the temporary wooden walls.

“The message is resisting hate in the obvious way but also resisting being hateful people ourselves because hate doesn’t contribute to anything,” said Eric Junker, a stack of posters at his feet next to a tray of glue. 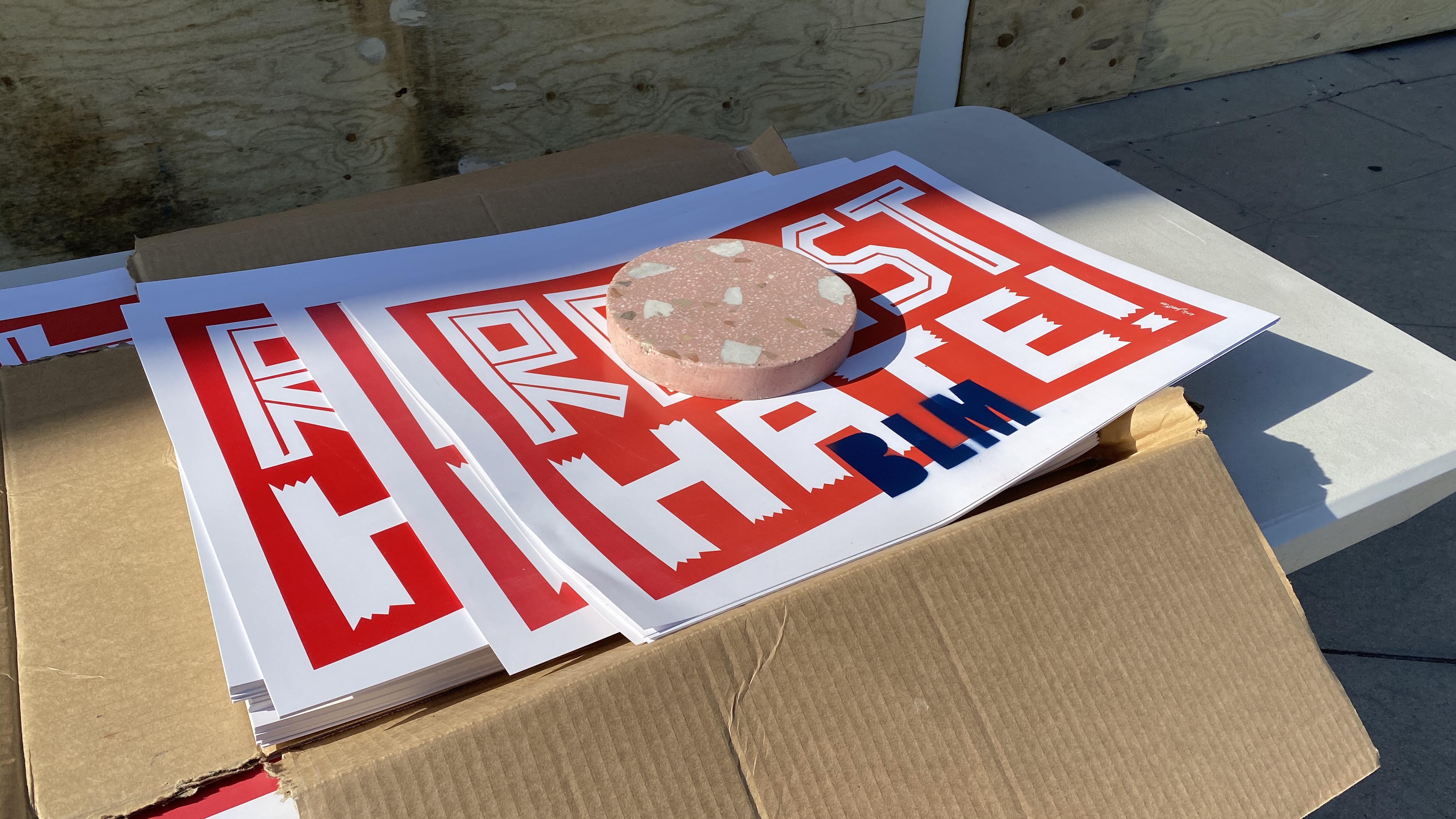 Based in Silver Lake, Junker is a graphic designer and mural artist who originally created the “Resist Hate!” image the day after Donald Trump was elected president in November of 2016. A couple months later, he printed them up as posters that were used for the Women’s March of early 2017 and various immigration rallies. He then put them away, thinking they had served their purpose.

Until this week, when protests against George Floyd’s killing enveloped Los Angeles.

“I started getting emails and texts and DMs asking if I had posters left over in my basement,” said Junker, who only had a few. So, earlier this week, he printed 2,500 more, adding the words “BLM” and “End White Silence” to the message and letting his Instagram followers know they could have them for free, as long as they donated to Black Lives Matter.

Laryl Garcia was one of a steady stream of supporters who stopped by the Fountain Avenue building where Junker was wheat pasting Thursday night to pick up posters.

She plans to use them “for marches, to hang in my windows at home,” said Garcia, who lives in Echo Park. Having donated $100 to Black Lives Matter, she took a dozen of them.

Comic strip artist Cooper Lit also stopped by to pick up a poster to put in his Los Feliz front yard “to join in the movement. Every little bit helps,” he said. “Hopefully what’s happening now is people are realizing that we can’t just stay in our comfort zone and allow this to happen.”

There's a long history of politically oriented street art in Los Angeles, from the Chicano mural movement of the '60s to raise cultural awareness to Shepard Fairey's Defend Dignity image created for the 2017 Women's March.

"Street art is especially important in times of protest and conflict because these creative acts can help us feel, educate and communicate what's important to the artist and/or the community," said G. James Daichendt, author of Stay Up! Los Angeles Street Art and a professor of art history at Point Loma Nazarene University in San Diego. "Street art is the art of the people because it reflects the interests of the community. That's not always the case in a gallery or museum."

Junker said the inspiration for the “Resist Hate!” posters was the art that emerged from the 1968 protests in Paris, when students walked out of school, fed up with the hierarchical structure of the French university system. Like those decades-old posters, which paired straightforward images with strongly worded messages for students to stand in solidarity, “Resist Hate!” is simple and striking.

They’re red because “that’s the color of action,” said Junker, who also “encourages action driven by anger but not hate.”

There’s a lot to be angry about right now, as more than a week of protests demonstrate: police brutality, racial inequality, opportunistic looting at a time when businesses are already suffering from Covid-inspired shutdowns. The “Resist Hate!” posters are, for many businesses, a way to take action by at least taking a stand.

“None of us like having a plywood wall in front of our restaurant,” said David Rosoff, managing partner of Hippo Restaurant in Highland Park. “If it’s going to be there, we wanted to use it as a platform for some sort of positive, supportive message.”

Hippo boarded up earlier this week to deter possible looting and invited Junker to put up his posters on the plywood. Rosoff’s restaurant has been closed for the past several days because of city curfews but is reopening Friday. Rosoff said his staff will be handing out the “Resist Hate!” posters in its pick-up and delivery orders, as well as a march that’s planned for Friday afternoon in Highland Park. 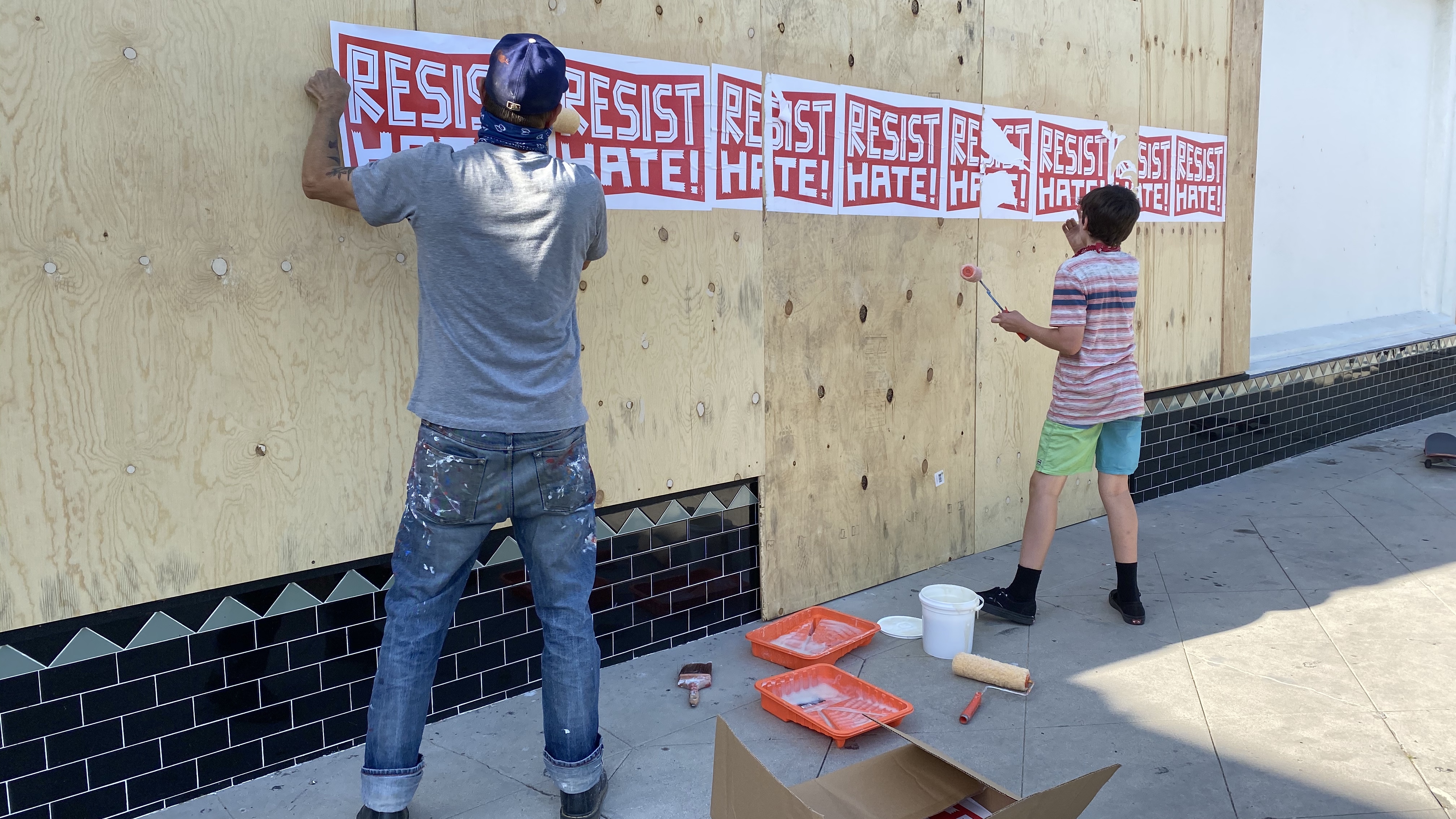