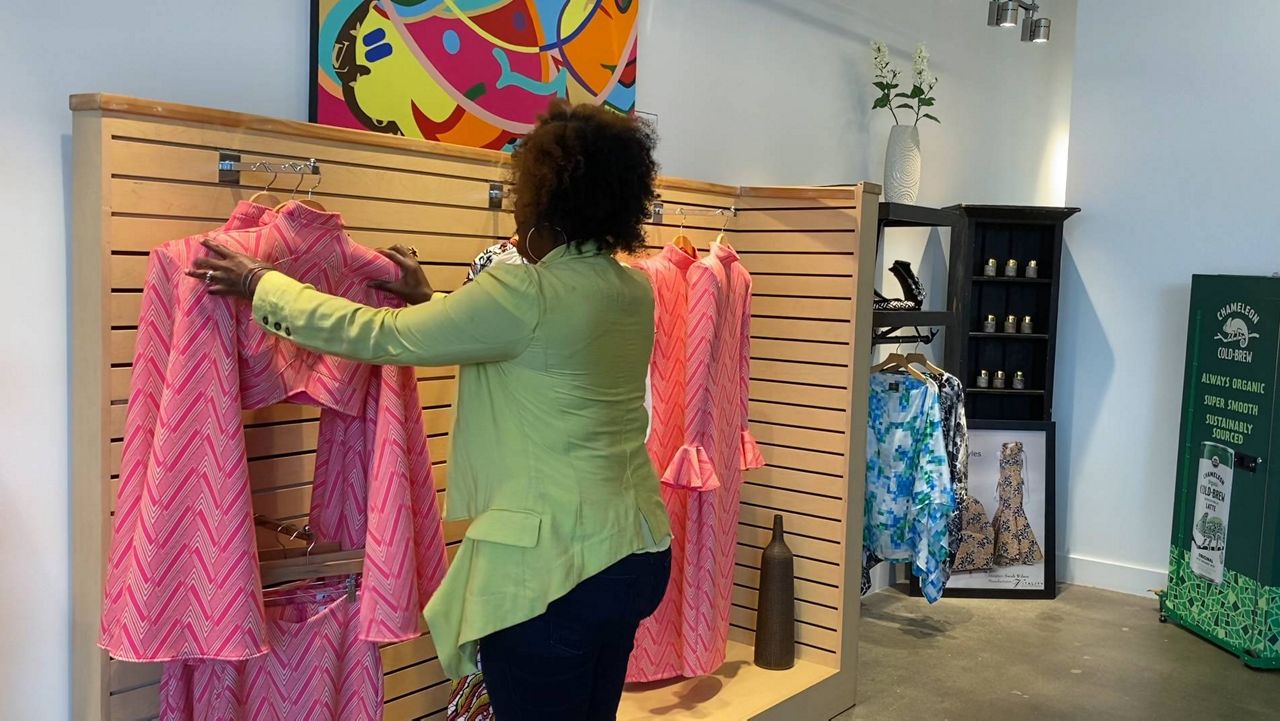 PLAYA VISTA, Calif. — It was her destiny since the day she was born.

Tashiba Jones-Wilson was named after the old school Toshiba television sets, but after two decades of working as a costume designer in Hollywood, she realized her true calling was to another industry.


Jones-Wilson is now fully invested in her new passion project. She even flew home from working on set in New Orleans to showcase her plus-sized inclusive, high fashion venture.

Her clothing store, Matte Argyle, is located in Playa Vista. Customers can also be styled, get their makeup done and appreciate the arts.

When she opened the store, Jones-Wilson knew she wanted Matte Argyle to be an experience. The name alone represents fashion and beauty in a place where two worlds collide.

"Matte refers to a finish and then argyle is a really classic print that again both women and men wear," Jones-Wilson explained.

Classic and timeless but Jones-Wilson was first called to open Matte Argyle for a specific group of people. The costume designer has spent about 25 years picking out clothes for actors on set, but anytime she was looking for a wardrobe to fit a plus-sized actor or actress, her choices were extremely limited.

"It was always hard to find the really cool stuff for plus-sized women, like over a size 14. That would be an issue, really," she explained. "So you’re going into say, a Saks, where you have so many amazing designs and then you gotta shop for someone that’s a size 14 and above and there’s really nothing there.”

She took a leap of faith in the middle of a pandemic and opened a storefront in Playa Vista with her manager, Tiffany Aldaco.

They carry designers who make men and women straight sizes which is 0 to 10 and plus sizes up to 3X.

“I leaned on a lot of the relationships I already had with brands and local, you know LA [people] because of working in film and TV. I would pull from a lot of these brands," Jones-Wilson explained. "Being here now, I’m getting these really cool calls from my fellow costume designers and stylists like, 'hey I’ve gotta dress this curvy actress, what do you have?'”

It is a luxury Aldaco said many people who wear straight sizes take for granted. After meeting Jones-Wilson on set and hearing her vision for her underrepresented market, the celebrity makeup artist knew she wanted in.

"When she told me that she was looking to open a size inclusive retail space I was so excited because first of all, you can only own so much Torrid, no shade. You can only own so much fast fashion," Aldaco laughed. "But it’s like, I want to be able to look like the way I feel and fashion is a language you speak without having to say a word and plus sized women have a lot to say.”

Now she wears her confidence on her sleeves, or in this case, her versatile pockets that can be transformed into several different styles.

"Like how cute am I right now?” Aldaco said about the dress she was wearing that she purchased from Matte Argyle.

These are the reactions Jones-Wilson does it for and she’s excited to keep expanding with in-house art galleries, pop up events for online designers and more. For her, fashion is therapy and a way to bring people together.

"You can be having kind of a down day and somebody’s walking to you smiling ear to ear talking about how cute you look, it makes you smile," Jones-Wilson said.

Now she is the one smiling ear to ear.

If you would like more information about Matte Argyle, visit www.matteargyle.com.