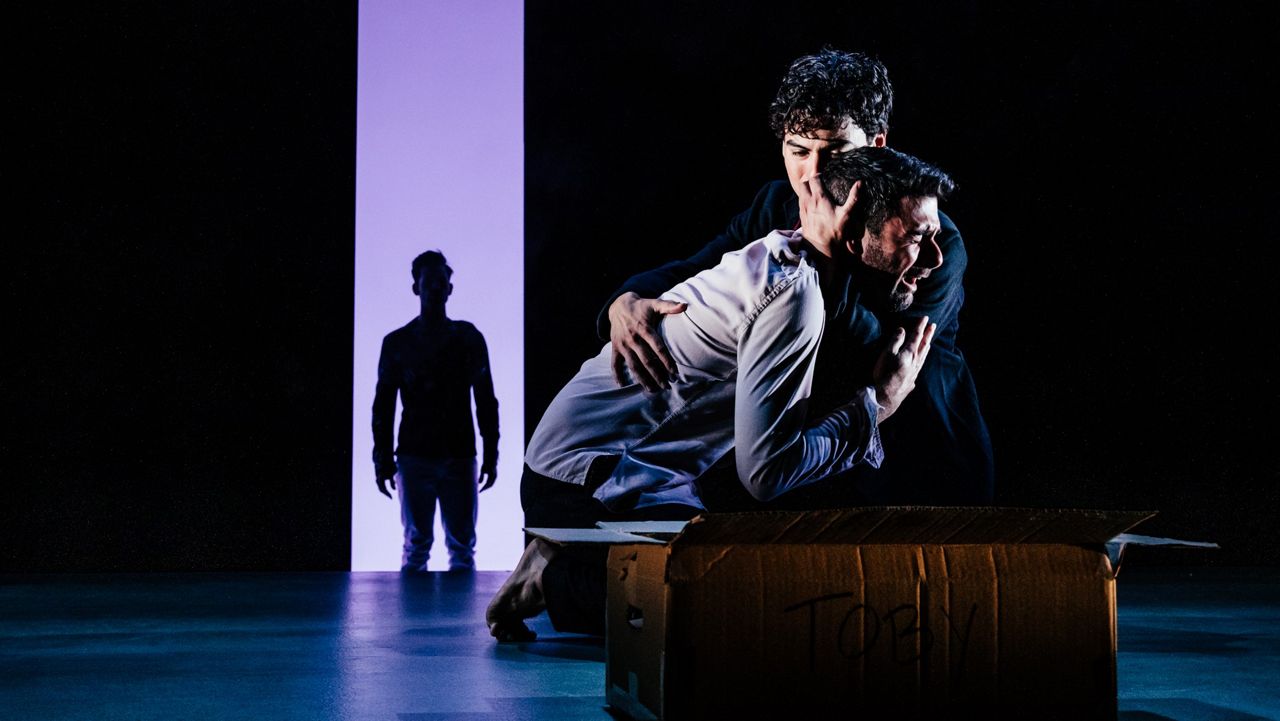 LOS ANGELES — In Part 1 of “The Inheritance,” the character of Morgan tells the men assembled on stage, “Tell your story bravely. It is a story worth telling.”

He may as well be describing the play itself, a sweeping story worth telling — and worth witnessing together.

It’s that communal experience that brought Tony Rodriguez to the Geffen Playhouse one recent Sunday just past noon. He came prepared, with a small packet of tissues hidden in his blazer pocket. He had read “The Inheritance” already and knew the subject matter was going to hit home.

“This week will be the two-year anniversary of the passing of a dear friend of mine who died of AIDS,” he said, his voice catching a little. “So when this was opening I’m like, ‘Oh, I want to see this and have sort of this experience with a community.’”

Community is very much at the heart at “The Inheritance: Part 1 & Part 2” according to director Mike Donahue.

“I don’t know that I had seen a production where I felt able to see and feel myself and my community so deeply and so extraordinarily drawn,” he explained. “To see a piece of theater that was speaking to me… and asking me to think more deeply and more richly about my relationship to my community. I had never seen anything like that before.”

Donahue has long been friends with playwright Matthew López, and had previously directed the world premiere of López’s “The Legend of Georgia McBride.” Lopez sent him an early draft of the script, long before the show’s Tony-winning Broadway run.

“I remember sitting in my apartment in Brooklyn,” Donahue recalled. “There was a blizzard… and I was under my covers. I was like pouring from a bottle of whiskey, reading these plays straight through, just like sobbing, in tears.”

Lights up on Kasey Mahaffy, years later, reading the published scripts on his couch during the pandemic, “and just sobbing my eyes out and laughing hysterically,” he said. “I actually said out loud, I was like, ‘This is an actor’s dream.’”

That dream is now a reality as he makes his Geffen Playhouse debut, part of the powerful double-header that elicits laughter and, indeed, outright sobbing from the audience.

“I’ve never been in a theater and heard such audible crying at a play before,” Rodriguez said as he emerged after Part 1. He still had three plus hours to go.

“The Inheritance” is in all ways an event. Two plays, broken into roughly 6 acts, for what amounts to close to seven hours total. Audiences can digest the entire story over two nights or consume it all in one day for what Donahue describes as binge-watching live theatre.

“Like I think seven hours sounds like ‘Oh, God, seven hours,’” he laughed. “But I sit down and plow through seven hours of Netflix on an evening and don’t think anything twice about.”

It does feel like that — in a sense. There is an intermission, or at least a “brief pause”, roughly every hour or so, a chance to stretch one’s legs or grab a snack. There are also tissue boxes strategically placed at the doors to the theatre for audience members who didn’t have the foresight of Rodriguez to bring their own.

“I cried a few times,” he admitted. “And it’s very funny. It moves so quickly. And I’m surprised about that.”

Mahaffy has heard that before, which is high praise for a pair of plays with what can sound like an overwhelming running time.

“The number one comment of people when I talk to them after the play is like, ‘I couldn’t believe it,’” he said. “‘It didn’t feel long at all. I wanted to keep going. I want a part three and part four.’”

Maybe that’s because there’s a lot of ground to cover. Friendships, breakups, deaths and weddings, addiction, economic inequality and deep discussions about the past — the AIDs epidemic, the Stonewall riots, and back even further, more than a hundred years ago, to a young E. M. Forster. The author of “Maurice and Howard’s End,” which provides a loose framework for “The Inheritance,” is embodied in the character of Morgan, who appears as part writing instructor, part spirit guide. 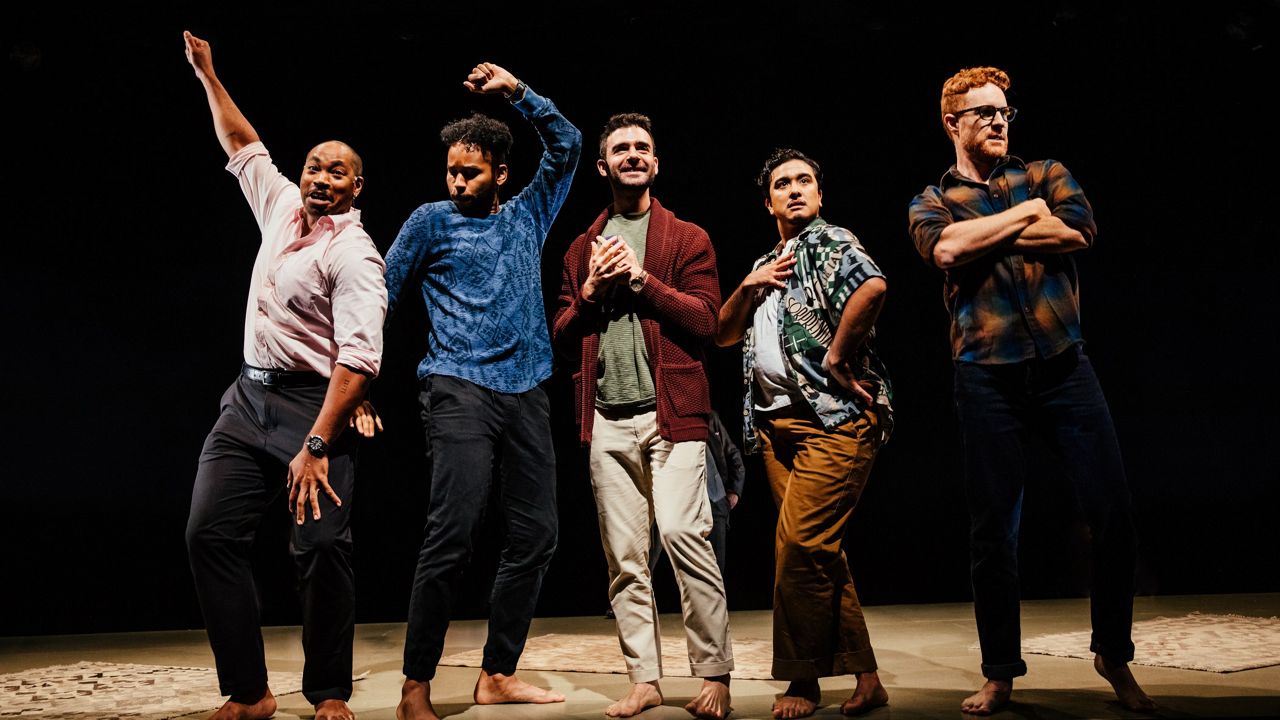 “To try to beg the question, what do we owe each other as gay men?” Mahaffy explained. “From generation to generation of gay men, as we pass down our stories and our commitment to each other, what does that look like?”

It’s a question he’s mulled over in his own life. Mahaffy, who married his husband in 2020, does not take his community’s history for granted.

“Boy, do I feel a tremendous reverence toward the generation of gay men before me,” he said with an exhale. “We stand on the shoulders of the generation before us, right? And, you know, there have been generations of gay men that have done bold and moving enterprises to get us established in society.”

For those unfamiliar with that history, the Geffen Playhouse staff has put together a digital study guide. It includes an interview with the playwright, information about Stonewall and Forster, and a list of books, films and Broadway shows referenced throughout the narrative, challenging audiences to continue the deep dive.

At the same time, “The Inheritance” also looks to the future, acknowledging that the progress made by past generations is hardly permanent.

“There are certain things that we thought were just foundational that certainly were not,” Donahue said, “And I think about how hard some of the generations before us had to fight for their rights… I sometimes find myself wondering if we’re all ready for that. If I, myself, am ready for that and strong enough for that.”

“And it doesn’t really matter,” he added. “Because we’re going to have to be.”

There are several generations represented in epic play, from the barely 20-year-old Leo, to the vibrant group of thirty-somethings that make up Eric’s circle of friends, to Walter and Henry who lived through the AIDS epidemic in very different ways. The cast, which Donahue describes as “predominantly queer”, reflects those generations, and the director found that led to conversations in the rehearsal room that mirror those playing out on stage.

There was a lot of time for reflection and conversation over the past few months — yes, months — of rehearsal, and Donahue says the company has grown into a family. “The Inheritance,” which is playing at the Geffen Playhouse though Nov. 27, is a theatrical marathon and the actors had to work to build up their stamina, but as exhausting as performing the show is — emotionally and physically—- Mahaffy says it’s worth every single second.

“People have told me they’re changed for seeing this play,” he said. “I mean, that’s it. We’re changing people’s lives with the story. And that feels really good.”

As for Rodriguez, it was dark by the time he left the theatre that Sunday night, still processing what he had just witnessed, and figuring he would be for some time.

“It is very important, I would say,” he said, standing in the cool night air of the illuminated Geffen courtyard. “I’m very moved.”

Quickly doing some math, he noticed something about binge-watching both parts of López’s play in one day. “It’s longer than flying across the continental U.S.,” Rodriguez realized, adding, “But what a journey!”