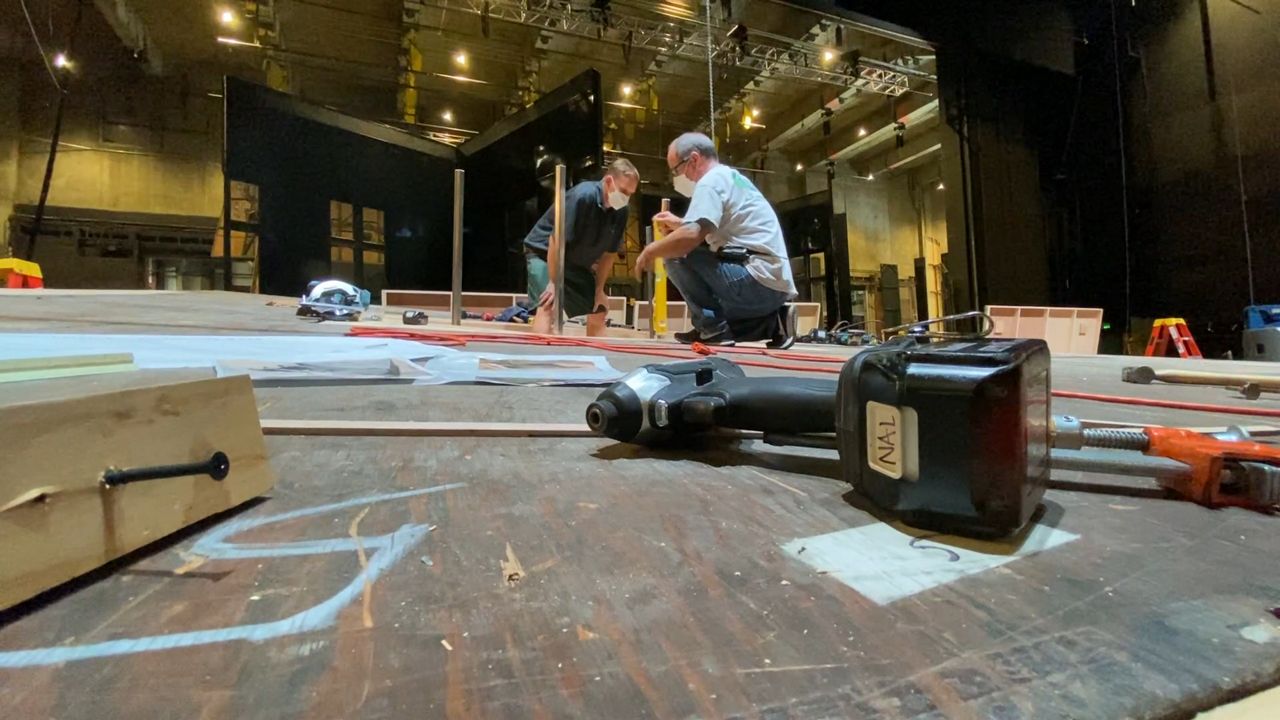 With its set stuck on a cargo ship, LA Opera builds a new one prestissimo

LOS ANGELES — In opera the stakes are usually high, but as the LA Opera prepares for their first in-person, fully-staged production since the start of the COVID-19 pandemic, things have reached a crescendo.

Inside, outside, upstairs and downstairs, crews are working feverishly all over the Dorothy Chandler Pavilion with an assembly line moving prestissimo to meet an unexpected deadline. It’s a symphony of construction sounds that is music to technical director Jeff Kleeman’s ears.


“What we need more than anything right now is saws spinning and staplers stapling and painters painting,” Kleeman said.

Il Trovatore is set to open on Sept. 18. However, the set being rented from a previous production in Monte Carlo is stuck at sea in the weeks-long backlog of ships currently circling the Port of Los Angeles, unable to offload their cargo. When Kleeman first heard the news, he had one moment of disbelief and then went straight into work mode.

It normally takes the LA Opera crew three to six months to create a set start to finish. This time, time is seriously limited, and Kleeman needs to make every second count.

“We have 10 days, 14 hours a day and approximately 45 people on the crew during that time,” he said.

So is the deadline even doable?

“So far,” Kleeman said, followed by a chuckle.

Helping make it all doable is design manager Carolina Angulo, who admitted that this project is far from normal.

“Never have we worked this fast,” she said with a laugh.

As soon as Angulo heard that the set en route from Monaco wasn’t going to make it, she did a quick calculation and knew she wouldn’t be getting much sleep for the next few weeks.

“I can’t count anymore,” she said. “All I see is math and dimensions in my dreams.”

Angulo has been studying original photos of the set for months but doesn't actually have the design specs. Even if she did have the plans, she explained, “these construction drawings exist in French and in metric units, so it would have even been useless for us to receive that.”

Instead, Angulo had to redesign from scratch to keep the production afloat. It’s the aria she’s trained her whole life to perform.

“This is like our moment to shine, really,” she said. “This is where everybody comes together to, you know, on-the-fly problem solve, and this is pretty exciting.”

It is also daunting — and expensive.  Kleeman had to make an emergency purchase of 25,000 pounds of raw lumber, which he was amazed he was able to find. Plus, the team had to recreate and program several LED light panels using a mix of rental equipment and whatever they had on hand.

“All of this equipment is also stuck on the containers on the ocean,” Kleeman said while looking over the busy stage that will eventually be completely surrounded by painted panels and feature several fire effects.

Kleeman also had the tough job of breaking the news to Rupert Hemmings, LA Opera’s vice-president of artistic planning, who says they considered several alternate plans — postponement, a concert version, even a different production altogether. But after an 18-month closure and the financial toll that took on the company, Hemmings said cancellation was “clearly an option that we didn’t want to entertain.”


“It’s been very, very difficult to get through,” Hemmings said. “We’re exceedingly happy to be back, and one of the reasons we are pushing hard to do Trovatore is because we really want to come back strong, and we want to come now.”

Life has been so full of unexpected twists throughout the past year-and-a-half that, in a way, another hurdle wasn’t a surprise, Kleeman said. But if all goes according to this plan B, by the time the audience arrives, the only drama in the building will be happening on stage.

“The goal and our intent is that the audience doesn’t know the difference from what would have come off the trucks off the ship versus what we are building now,” Kleeman said.

Kleeman is also already preparing for a production of La Cenerentola that opens in November. That set is about to hit the high seas for what everyone at the LA Opera hopes will be much more legato journey.