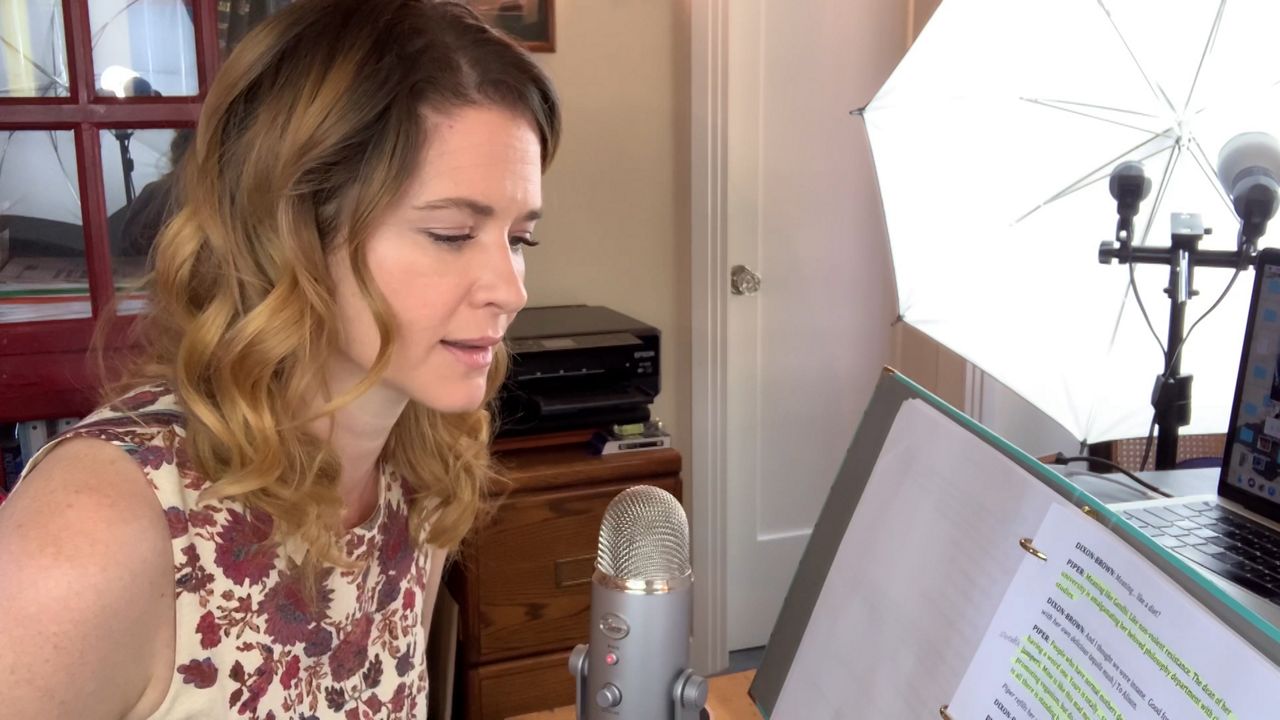 WEST HOLLYWOOD, Calif. – Sarah Drew is happy to be working in the theater again. Even if she is nowhere near an actual theater.  Instead, this summer she found herself in a sound booth, working on new titles for L.A. Theatre Works' growing collection of play recordings.

Drew has been performing with the non-profit arts organization for about a decade. “It’s a little flavor of doing a play,” she explained, “a little taste of it. It scratches an itch.”

With over 500 titles in their catalog, L.A. Theatre Works has created the largest archive of recorded plays in the world. Throughout the pandemic they’ve made some of those titles available for free to students, educators, and other nonprofit arts organizations. They’ve also announced plans to return to UCLA’s James Bridges Theater for live recordings as soon as it is safe to do so.

Until then, they’ve adapted and so have their actors, like Drew and Seamus Dever, who recorded two plays back to back this summer.

Whether the shows are recorded live at UCLA’s James Bridges Theater, or in a sound booth at The Invisible Studios, the actors are generally side by side. Now, with strict COVID protocols, Drew and Dever said they barely even saw each other, outside of a rehearsal over Zoom.

“We have a staggered arrival. We’re never cross paths. We’re never in the same room at the same time,” Drew said of their experience in the studio. “You’re really in your little booth and only connected to people when you’ve got the headphones on and it is weird!”

“It’s all just in your ear,” Dever said, “all in your ear and your imagination and the movie in your mind.”

Producer Anna Lyse Erikson says the new protocols forced the company to adjust their season – swapping out plays with larger casts for smaller ones, like the four character piece, The Thanksgiving Play.

“It was one of the first that we thought, ‘oh it would be great to do this in the studio,” she said.

They also needed to allot for more time. They used to be able to fit and record an entire cast of 10 actors in the large studio. “That’s our normal thing,” Erikson said, “but now it’s just one actor in here at a time.”

The other is in this smaller booth a few doors away, with no window to their fellow actor or the control room. With only two booths, that means they can only record two actors at one time, so a four-character scene has to be tackled two by two.

“We will record with the first two actors,” Erikson explained. “They will do all their scenes in the foursome and the next day we will record the other two actors doing the same thing the two before them did the previous day.”

All this, plus they have to adhere to protocols dictated by SAG-AFTRA including temperature checks and health screenings. It’s a lot of logistics but Erikson says it’s still possible, and that’s the important thing.  “It’s exciting for us to be working so we’re happy to do it.”

Dever says he felt perfectly safe during his time in the booth but also feels everyone needs to take the lead role when it comes to protecting themselves.

“I think it’s incumbent upon all of us to take care of our own safety as our industry reopens,” he said. “If something feels like an unsafe environment, if there are people not wearing masks, you have to kind of take care of yourself and bring your own sanitizer, require people to wear a mask. You really do have to fend for yourself.”

Both he and Drew are thrilled to be working and working together, even if they never crossed paths. They were still able to connect to the play and to each other and they hope audiences will connect as well.

“I think it’s a very alive experience of a play,” Drew said. “I think it is definitely providing something special and unique during this time when we all feel pretty starved.”

A feast for the ears cooked up in the safest environment possible.