The science behind nor'easters

For most adults, it’s a word typically associated with a headache of a commute, or if you live along the coast, it can also mean a flooded basement, power outages or perhaps worse.

For most kids, it’s the word synonymous with an unexpected free day to sip hot cocoa, sled or get into a snowball fight.

Nor’easters are usually the biggest weather-makers across the Northeast each winter, and they are best known for thumping big cities like New York, Boston, Philadelphia or Washington D.C. with huge snow totals, coastal flooding and extreme winds.

They're not always blockbuster snowstorms, though.

Each winter, nor’easters form off the Mid-Atlantic coastline, whipping the Eastern Seaboard with varying degrees of rain, wind, snow and coastal flooding.

These huge storms can bring virtually any meteorological hazard to the Northeast, though they’re most typically synonymous with big snows.

If you’re looking for a general rule about meteorology, it comes down to the fact that weather is essentially Earth’s way of balancing things out.

During the winter months, the land mass of North America cools in response to chilly temperatures. Meanwhile water’s high specific heat (as in it takes more energy to alter its temperature) means that water holds its warmth through the winter better than land.

The warm Gulf Stream ocean current runs parallel to the Eastern Seaboard, meaning ocean temperatures stay warm there despite flowing next to the much colder eastern portion of North America.

The temperature difference between the cold land mass and the warmer ocean current breeds nor’easters. Again, it all comes down to nature’s way of balancing itself out, just as hurricanes do during the summer and fall.

Sure, nor’easters are typically synonymous with big snowstorms for the most densely populated part of the country.

In order to get a snow-producing nor’easter for the big cities along the I-95 corridor, you need a bit of a perfect blend of ingredients: First, you need enough cold air and moisture to support snow, and that’s more difficult to get than it might sound.

Second, of course, you need enough moisture to produce the snow in the first place. Those ingredients are largely dictated by a nor’easter’s exact track.

There’s a magical number for that snowy sweet spot: The so-called 40-70 line, also called the benchmark. That’s in reference to the longitude (70 degrees west) and latitude (40 degrees north) of a point south of Nantucket in the Atlantic Ocean.

If the nor’easter tracks west of the benchmark, it tends to turn into a warmer storm and, therefore, rain for the coast. That’s because an area of low pressure tends to ‘draw in’ warmer air off of the Atlantic.

If the nor’easter stays east of that point, it’ll stay too far offshore to provide significant moisture. 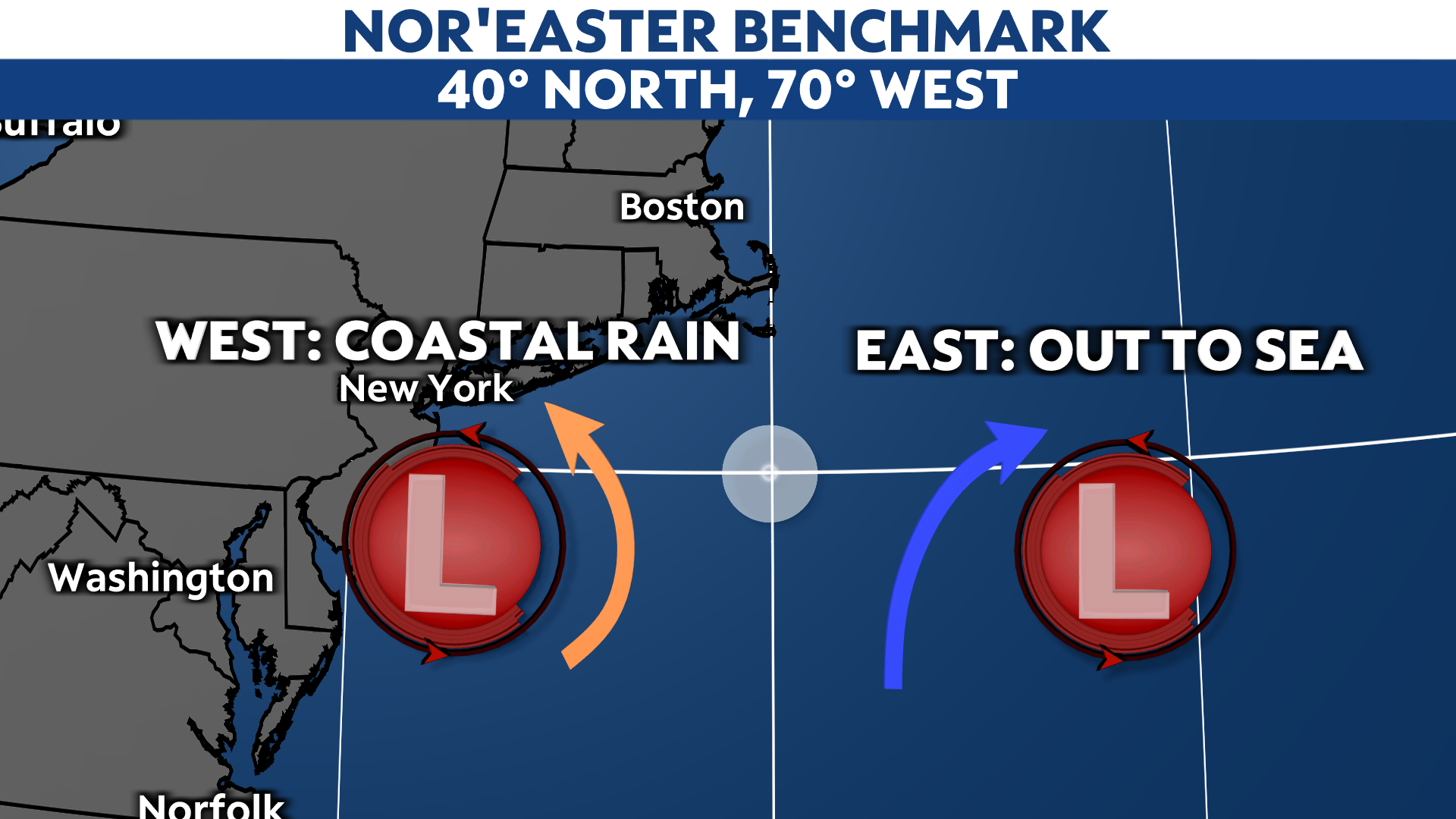 It’s sort of like that game where you throw a tennis ball up from your bed and try to get the ball as close to the ceiling as possible. In order to get snow along the coast, you typically need a nor’easter to track relatively close to the Northeast coastline, but not close enough to where it draws in enough warm air off the Atlantic.

It’s a bit of a meteorological tug-of-war. That’s why most nor’easters don’t lead to snow, at least for the big cities.

It’s also part of the reason meteorologists can have a hard time forecasting these systems.

“Often temperatures are borderline for snow vs. rain with a nor’easter, and a change in track of less than 50 miles can mean the difference in getting an inch of snow or a foot of snow,” said Spectrum News Chief Meteorologist John Davitt, based in New York City.

If you say the word “nor’easter”, it’s bound to immediately grab the attention of anybody living in the Northeast.

That’s because of the several inches – or feet – of snow these huge storms can produce. If you get a storm in that 40-70 line sweet spot, it can mean several inches of snow in just a few hours.

These storms combine the cold air of winter with Atlantic moisture to produce prolific snowstorms that can all but shut down the major cities of the I-95 corridor, including New York City, Philadelphia, Boston, and Washington D.C.

“Nor'easters are storms that not only get my attention, they get the viewers’, too,” Davitt said. “Their ears perk up when they hear the word ‘nor’easter’, because they know that these events can really impact their lives."

Because of the tropical-like strength to these huge storms, they’re well-known for churning up big waves along the Northeast and Mid-Atlantic coastlines.

The surf from these systems is often big enough to lead to destructive coastal flooding.

“As a meteorologist, the number one thing I look for with these ‘hurricanes of winter’ is the strength of the system,” Davitt said. “It has the potential for large power outages, massive coastal flooding and heavy precipitation.”

Finally, because of the power of these storms, strong winds can lead to hundreds of thousands or even millions of power outages. A nor’easter’s winds can rival those of a strong tropical storm or even a hurricane.

Nor’easters get their names because of the northeasterly direction of the wind that accompanies them – and not because they (primarily) affect the northeastern corner of the U.S. That wind direction is thanks to the counter-clockwise flow of the storms moving east of the Eastern Seaboard. 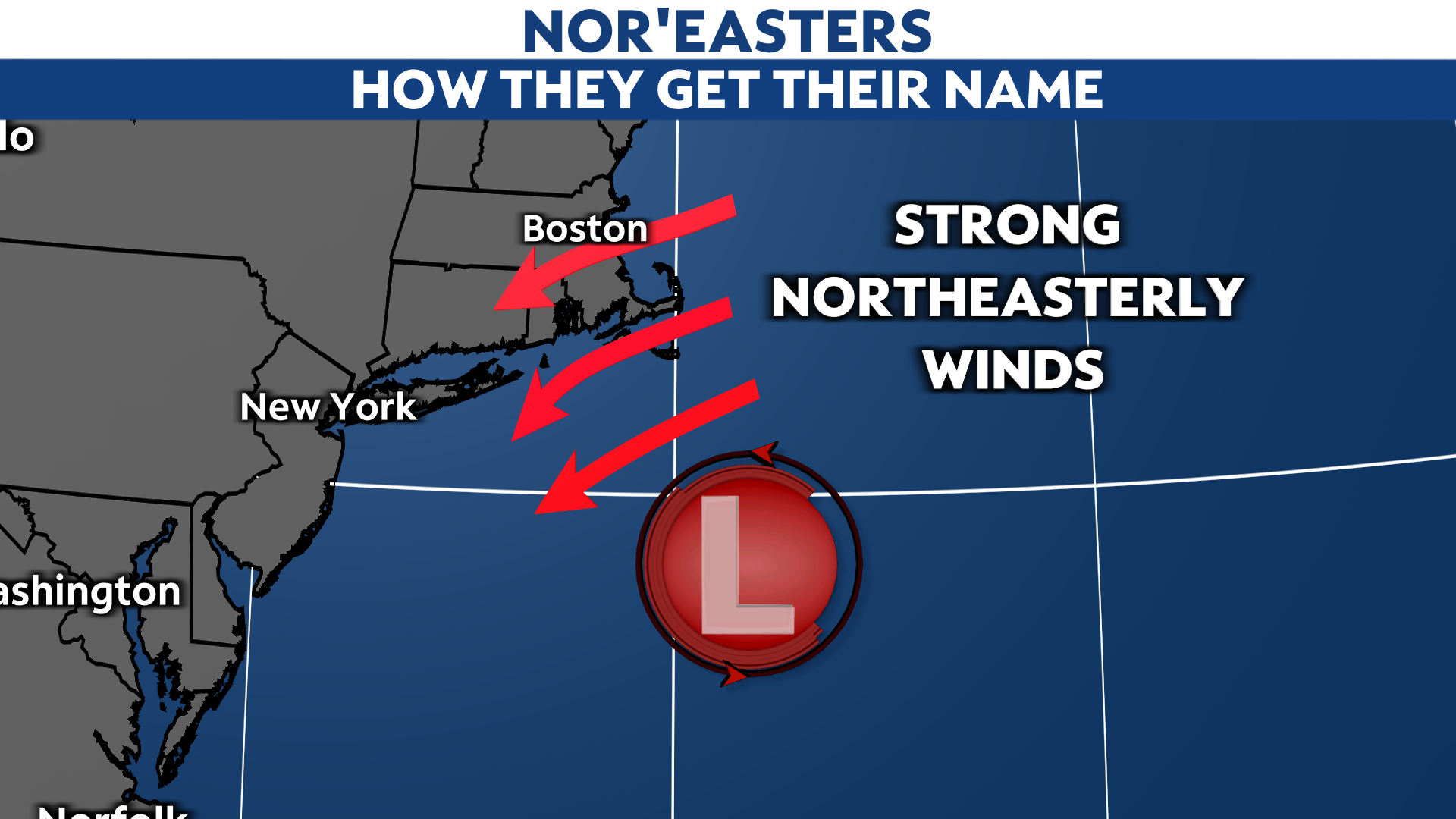 Between the big surf, snow and the strong winds that often accompany these storms, it’s little wonder that the word nor’easter is arguably the most famous weather term in the Northeast.