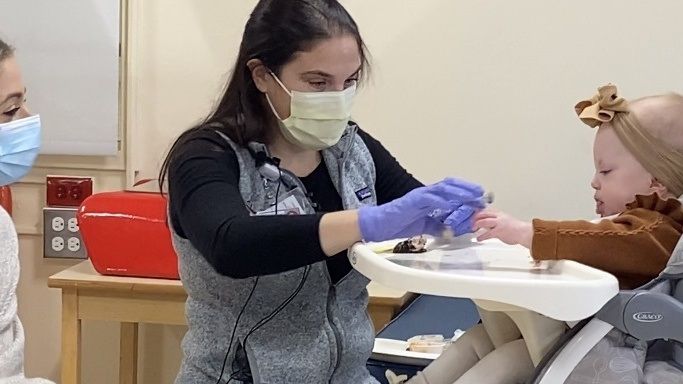 Baby with rare medical disorder makes it home for Thanksgiving

A 1-year-old girl from Westchester County is about to experience her first Thanksgiving at home after being hospitalized for months.

Gracie was born with an enlarged tongue that obstructed her breathing and limited her ability to eat.

“It was shocking," Gracie’s mother, Susan Milton, said. "So, you never go into parenthood, especially as first-time parents, wanting for your kid to be different or anything to be wrong with them. But I think it also answered a lot of questions that we had.”

“I’ve been working with Gracie since May. When she first came to us at Blythedale, she had not had a lot of experience with anything orally or in her mouth feeding-wise,” said Jessica Meyer, speech language pathologist at Blythedale.

Meyer said baby Gracie has worked hard on decreasing her dependency on gastronomy tube feedings with hard work during her treatment.

“So, we had to teach Gracie to pull her tongue back into her mouth. Also, how to move it side to side and elevate the tongue,” said Meyer.

Gracie’s parents are excited for the holidays coming up and looking forward to having Gracie at the head of this year’s table, trying her first Thanksgiving meal. So far, her favorite food seems to be sweet potatoes.

“I think it just means everything; have family, have everybody celebrate her. To be able to have her around the table and actually eat, like I can't wait for that,” said Milton.

According to the Children’s Hospital of Philadelphia, Beckwith-Wiedemann syndrome is equally found in boys and girls.