Turkeys may be more expensive and smaller this year due to a contagious strain of avian flu. (Emily Kenny/Spectrum News 1)

Photo essay: Why your Thanksgiving turkeys will cost more but weigh less

Holiday turkeys will be more expensive and smaller this season not only because of inflation, but also because of avian flu outbreaks across the country, according to the U.S. Department of Agriculture. 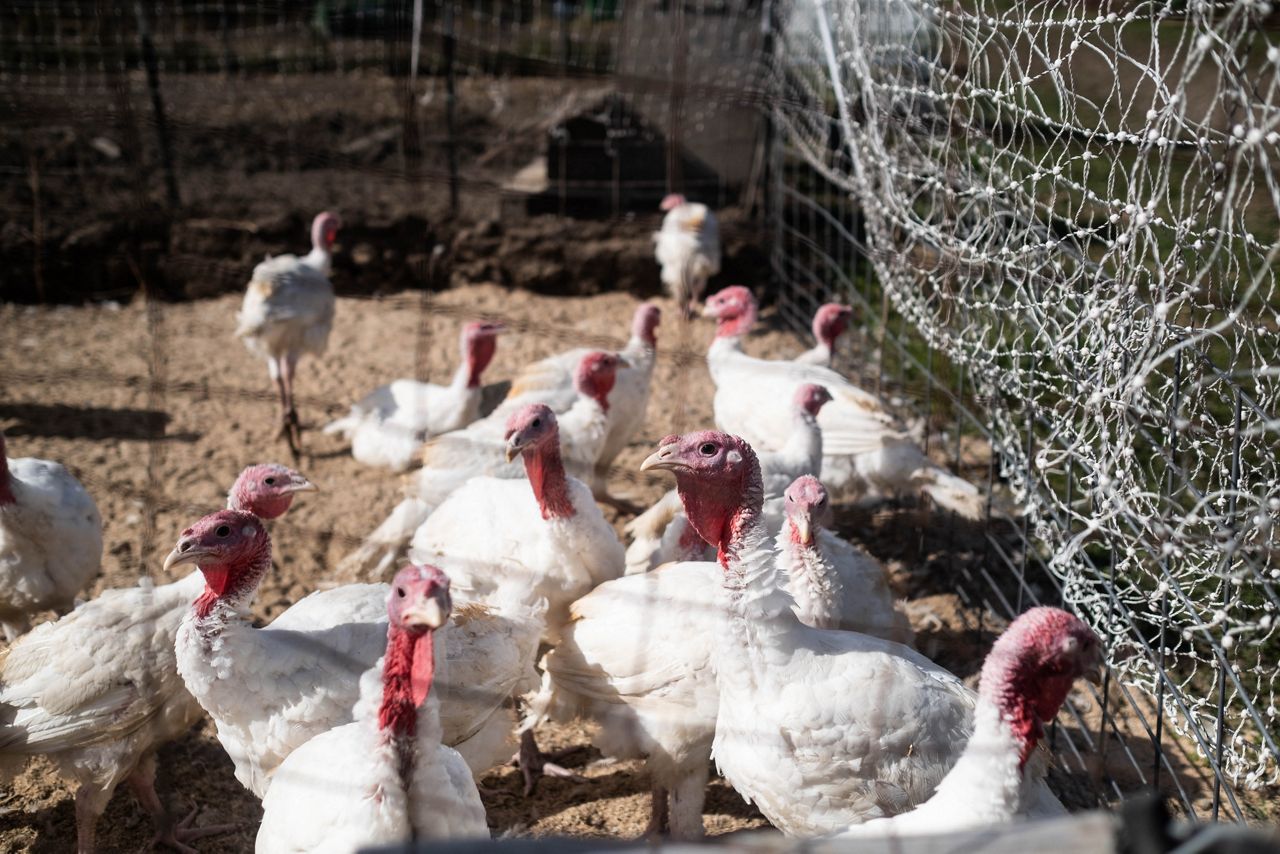 Federal officials say the highly pathogenic avian flu has killed 47.72 million commercial poultry in the U.S. this year, 7.4 million being turkeys. One of the latest outbreaks was at a commercial turkey farm in Pennsylvania that killed 15,500 turkeys. 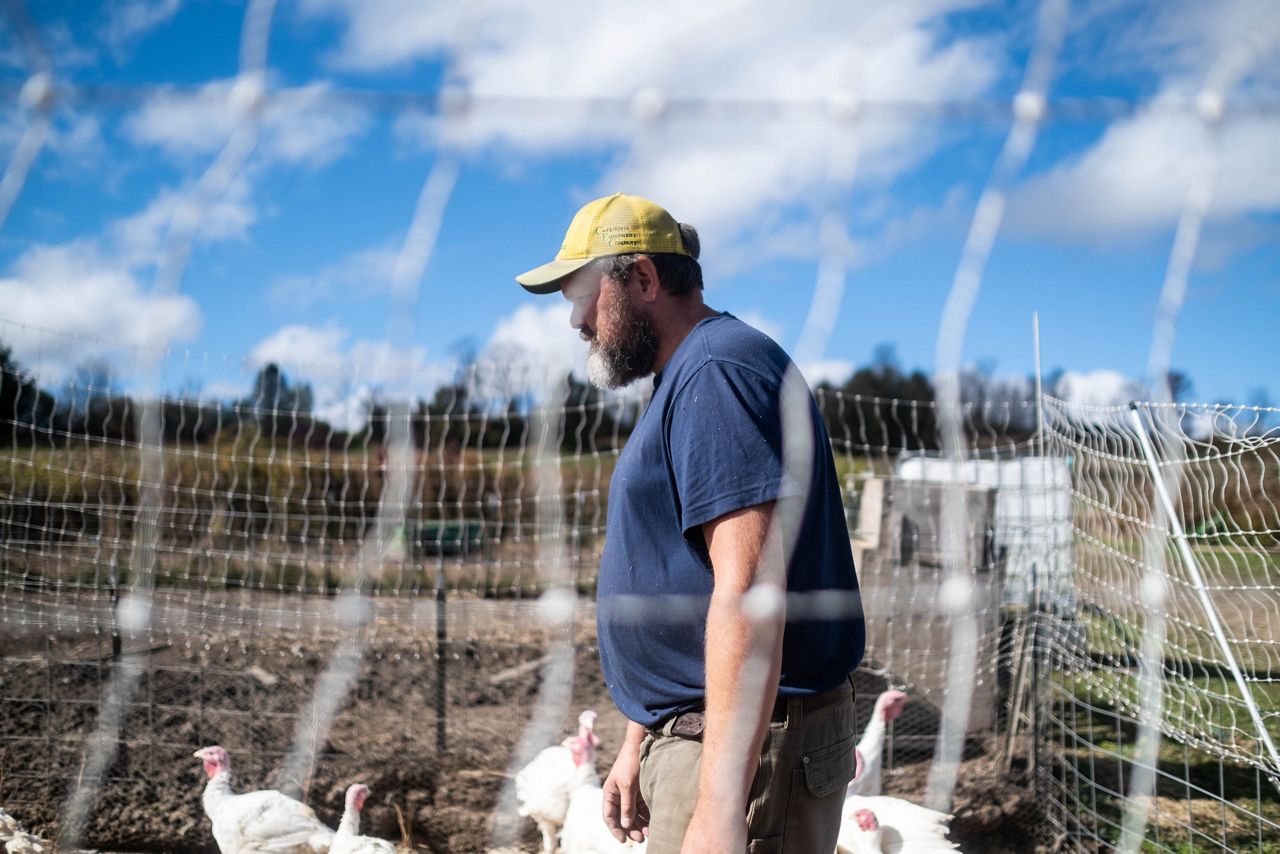 Local grocery stores are assuring customers they have turkeys in stock because they purchase their birds well in advance, but prices are up.

“The shortage was worse throughout the summer than it is now, but the prices are still high. We don’t anticipate there being another shortage, but the size of the birds may be smaller. People may have to make the choice to get a smaller bird,” said Dan Piron, a manager at Green Hills Farms Grocery in Syracuse.

Many commercial turkey producers butchered and froze their flock earlier in the year to avoid losing them to the avian flu, Piron said, so the birds are not as big as consumers may expect. 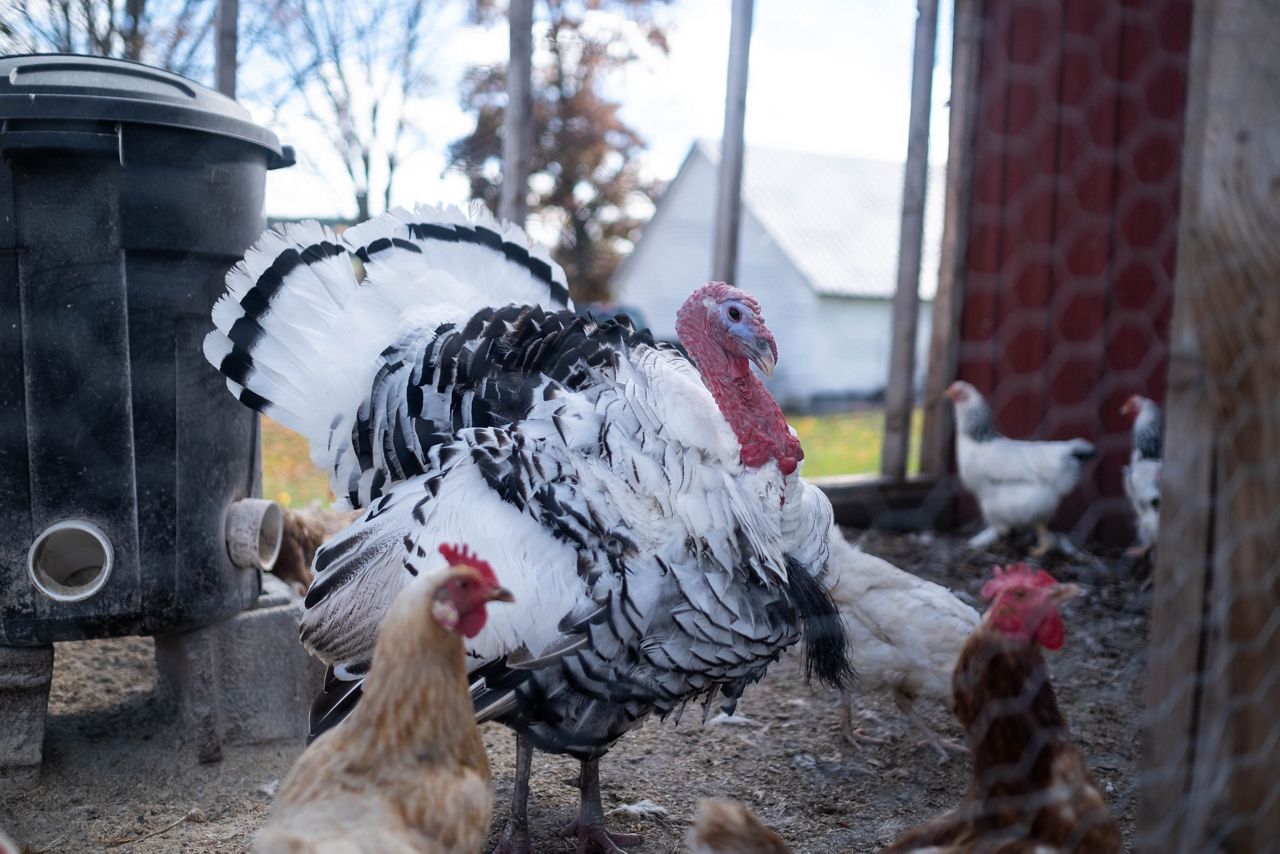 A heritage turkey among the chicken flock on Fox's farm. The flock has been covered with fencing to protect it from wild birds. (Emily Kenny/Spectrum News 1)

The current strain of avian flu is more contagious and causes severe illness, according to Watt Global Media, which follows the poultry industry. When one bird in a flock is found to have avian flu, the entire flock is contaminated and cannot be kept alive.

The disease spreads from wild birds to chickens and turkeys through naval secretions, saliva and feces. Poultry can also become infected from contaminated surfaces, such as water or the ground.

Farmers have had to take extra biosecurity precautions to protect their flocks this year. Josh Fox, who raises turkeys and chickens at his farm in Cazenovia, said they have put in measures to keep their flocks isolated from wild birds. 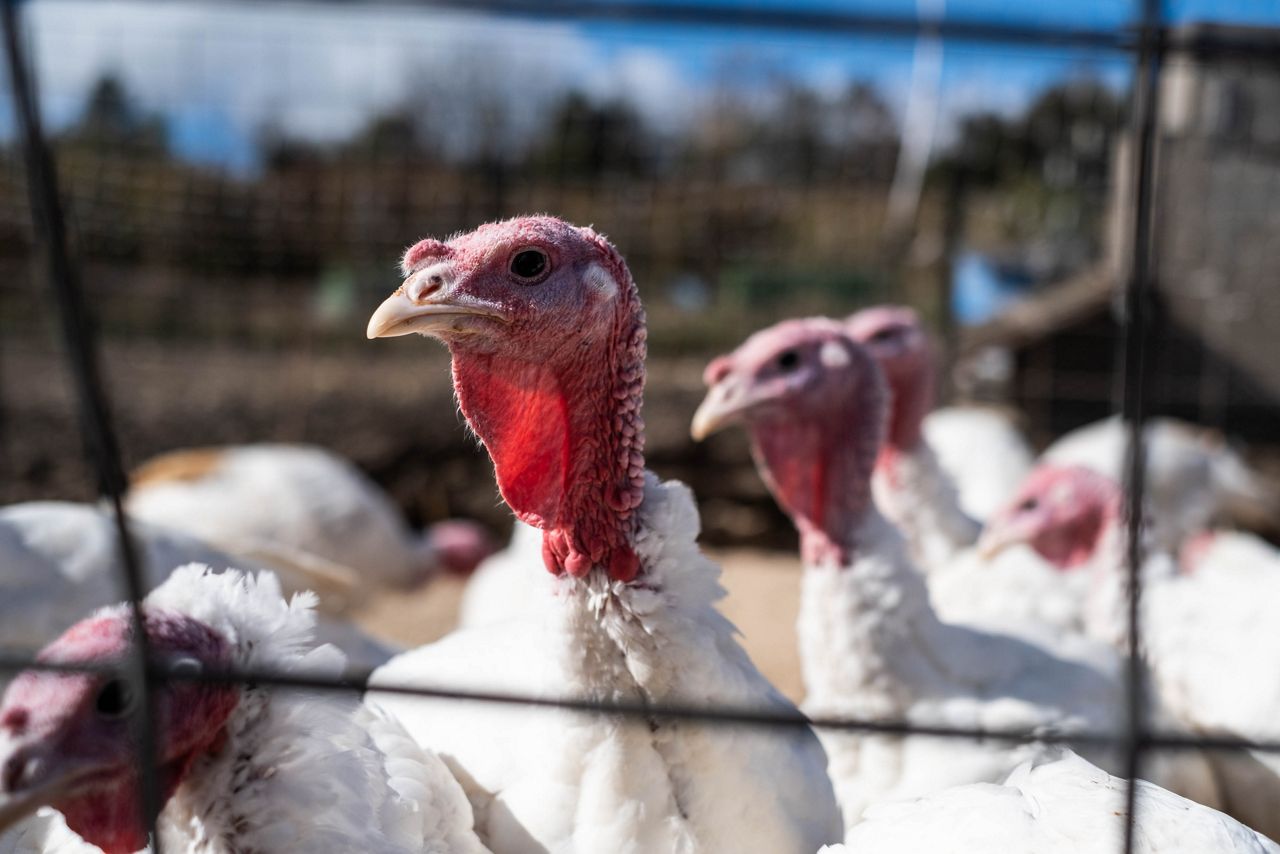 “We’ve isolated the chickens, because they were free range before, and what was happening is they were coming up and pecking at the ground around the turkeys,” Fox said. “We've also covered the water so that there's no risk of any other animal bringing anything in, and then we try to keep the grounds clear so after it’s rained, I'll come up and put new bedding down, so it stays dry so if we do have any birds flying over and anything gets transmitted, we keep it as clean as possible.”

The cost of putting in these measures is what can hurt profits for farmers. “The farm that we buy from had some losses due to avian flu, so it was harder for us to get poults,” Fox said.

Poults are young domestic birds being raised for food. This difficulty means they didn’t have as much time to raise the birds to be full size. Fox said they didn’t pay more for their poults this year but believes prices next year will be impacted. 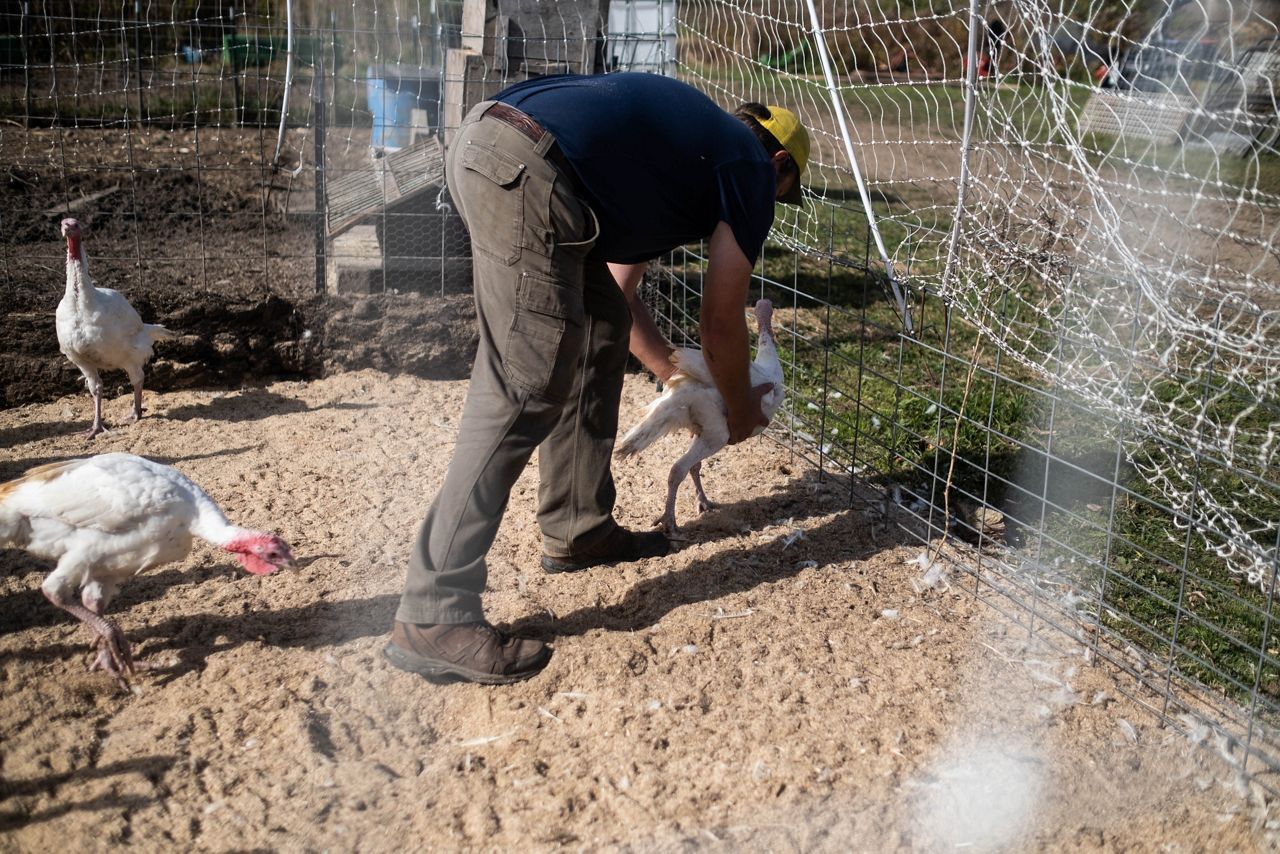 While Fox has already pre-sold all his turkeys, he said buying local is a good option for people looking for a holiday turkey if they can’t find what they want at the store. His birds are butchered four days prior to Thanksgiving.

“The flavor is much better, and the meat is much more tender,” Fox said.