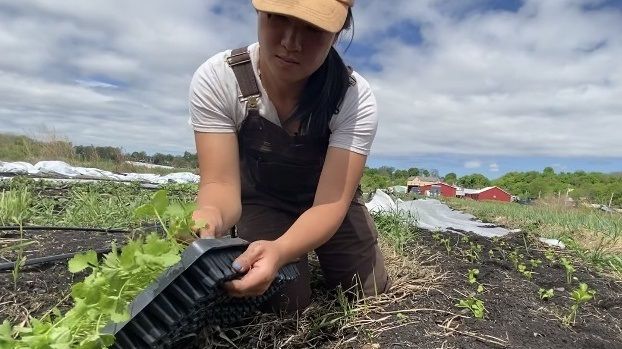 Despite the country's growing Asian population, Asians make up less than 1% of all U.S. farmers. One Hudson Valley farmer is making it work after moving from New York City.

In many ways, every day that Christina Chan steps onto her farm at the Chester Agricultural Center, she breaks barriers.

Chan was born and raised in the Big Apple to Chinese American parents who immigrated from Hong Kong. Now, she's owner of Choy Division in Chester.

"Our farm focuses on growing Asian-heritage vegetables, and we grow everything organically," said Chan.

Choy Division is a farm share, meaning customers subscribe to the farm at the beginning of the year and get to reap the benefits at harvest time.

She harvests vegetables from all over east and southeast Asia, from Bok Choy to lemongrass, to garlic chives and more.

Chan founded the farm in 2019 in Astoria, Queens, before moving upstate in 2020.

"We don’t have a lot of access to organic food. Despite the fact that Asian people eat so many leafy greens as part of their regular, daily diet, most of those things are not grown locally, number one, and they're not necessarily grown organically, so I'm just trying to give people that choice," said Chan.

As she watches her crops take root, she’s also connecting to her own.

"Doing this work is also about connecting back to my roots because I identify more as American," said Chan. "Because I've always felt in some ways split in the middle, and have not spent a lot of time embracing and acknowledging my Chinese roots, largely wanting to be accepted here."

"By growing all these vegetables it gives me a chance to reconnect with my culture and my heritage," said Chan.

She said a rise in injustices against the Asian American community pushed her to move forward on her farm.

May is Asian American and Pacific Islander Heritage Month. According to the Center for the Study of Hate and Extremism, anti-Asian hate crimes skyrocketed 164% in 16 of the largest American cities from 2020 to 2021.

"Much of the time, when violence occurs toward any group, sometimes one's first instinct is to keep your head down to protect yourself to become invisible, because if they can't see you, you can't be hurt, but by existing, by having this farm, by putting myself in the public eye, it’s the opposite," said Chan. "It's saying, 'I'm here, and you're not going to bully me. You're not going to scare me away.'"

To find out more about Choy Division and how you can purchase vegetables through their farm share program, go to choydivision.com.