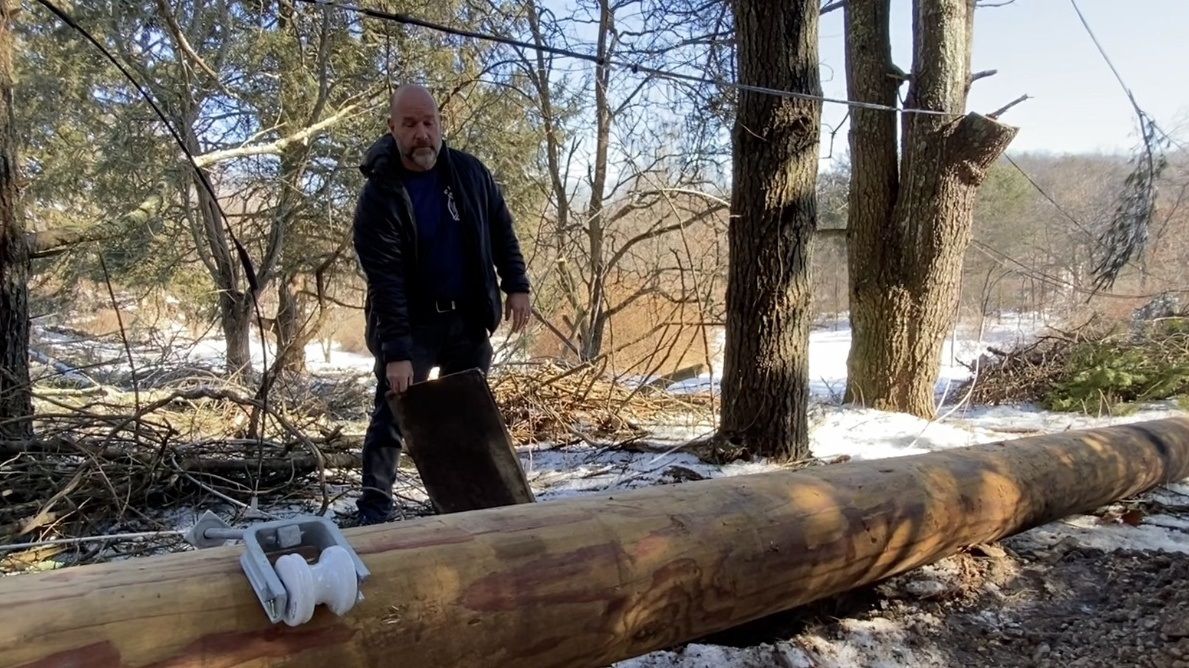 Everything in Peter Brown’s frozen Rosendale home is finally beginning to thaw: the icicles, food, even his bathroom.

Brown left the empty refrigerator open Wednesday, since everything inside had spoiled. He threw away more items from his cabinets, since they were starting to freeze.

“If things freeze and break, the liquid will be everywhere,” he said, holding boxes of vegetable broth.

He left the back door open awhile to bring in some of the warmer air from outside. The high temperature in Rosendale on Wednesday was 46 degrees.

It took a flurry of phone calls before a work stoppage on two utility poles was resolved.

Brown resides on Binnewater Road, where Gov. Kathy Hochul had just visited to survey some of Ulster County’s worst damage from the recent ice storm.

More than 60,000 households and businesses lost power Friday as ice — a half-inch thick in some places — pulled down trees, power lines and utility poles, often in that order.

Brown said Central Hudson workers arrived Tuesday to assess two broken poles in his and his neighbor’s yards. A contractor then arrived to install the poles but suddenly left.

“They stopped in the middle of the job,” Brown said, pulling a temporary cover from a freshly dug hole meant for the new utility pole laying on the ground.

A Central Hudson worker at the property Wednesday morning said the neighbors would need to hire contractors on their own to fix the pole before the power company could reconnect service.

After explaining multiple times over the phone to various Central Hudson representatives that a contractor job was left half-done, the power company agreed to send the contractor back to fix the pole.

Central Hudson spokesperson Joe Jenkins said Wednesday afternoon there was some “miscommunication on our part with the customer.”

Jenkins said poles that are located 100 feet from the main utility lines along a road are considered “customer-owned poles.” If the pole falls in typical “blue-sky situations,” the customer must handle the repair.

In this rare situation, Central Hudson made an exception.

“We had initially told him we would take care of it,” Jenkins explained. “It was then discovered it was a customer-owned pole, so work had stopped, but given the level of damage we saw throughout Ulster County, ultimately the decision was made to repair that pole.”

“They’re going to take care of the pole and the wiring up to the pole,” Brown said. “I’m responsible for everything from the pole to the house. So I was happy. It’s a positive resolution to this back-and-forth.”

Brown said he is looking forward to thawing out his single-wide manufactured home, but did expect some utility issues after the thaw, this time with his water service.

Power was restored to Brown and his neighbor just after 7 p.m. Wednesday.