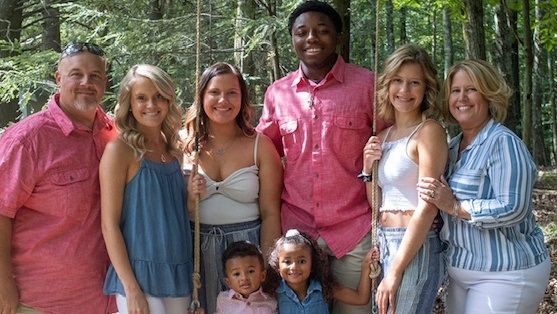 Every day, Sharon and Kevin Frey Facetime with Jordan Weaver.

"Ready to go to practice?" Sharon Frey asks Jordan as they catch up for the day. It's a typical conversation between a mother and son, one that started just a couple of years ago.

"I met Jordan his sophomore year," said Kevin Frey. "He was a little kid, a lot different than right now."

Weaver is this family’s foster son. It all started when Kevin Frey was his football coach. He found out Weaver was struggling at his former foster home, so the coach offered to open their home, and their hearts.​

"He was here for two or three days, and the first night he was here or the second night, we had a big family movie, and he said he’s never really done that before," said Sharon Frey. "He just said, 'I don’t really want to leave. Do you think I can stay?'"

Before long, Weaver became a member of the family, responsible for doing chores and helping out around the house. Soon, his grades started to improve, and he was on track to go to college.

"He was the perfect fit, too," said Ryleigh Frey, his foster sister. "It's like, he's always been part of the family."

According to the National Foster Youth Institute, only 50% of foster care children graduate from high school and less than 3% graduate from college.

Since a new law went into effect last month, there’s been a push to avoid placing children in congregate group home settings in favor of family-centric ones.

"I never really had someone really there to talk to a lot," said Weaver. "Having a female mother figure that I can talk to every day whenever I want, to having siblings around that I could joke around with instead of trying to make my own self laugh, it was kind of, it felt great to me." ​

"I only had sisters growing up, so it was like the best thing ever, because I finally got the big brother I always wanted," Ryleigh Frey said.

Weaver graduated from Goshen High School in 2019 and is now a junior at Utica College majoring in accounting.

No matter what he does next, he knows the rest of his family will be cheering him on every step of the way.

"One of the big moments for me was just when the first time he told me he loved me, and he put his arms around me," said Sharon Frey. "When I introduce him to people I introduce him as my son. I don’t even ever say foster son because he's just genuinely part of the family."