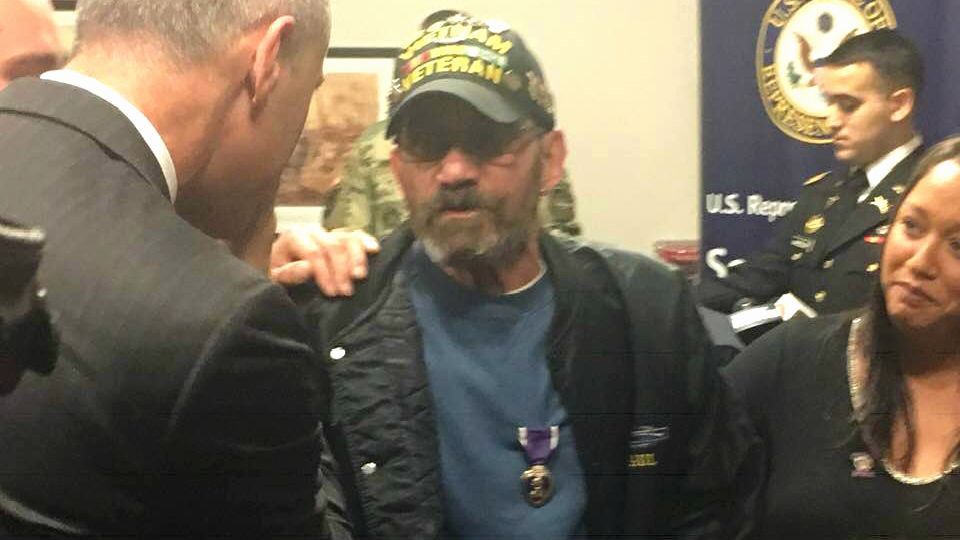 "The only thing I remember is someone grabbing me by the neck under fire, I can remember the machine gun fire from the VC," said Paul DeRogatis.

DeRogatis was a 20-year-old Army specialist serving in Vietnam when he was hit in the legs and spine with a mortar round. He was put in a body cast, and later awarded the Purple Heart, and the Bronze Star.

"So when I got to my next destination, the box was open, the Purple Heart was gone, the Bronze star was gone," said DeRogatis.

It's been 49 years. His medals gone. The man who saved his life, Louis Testa, eventually died from Agent Orange-related cancer.

"He saved my life, and he lost his own," said Paul DeRogatis.

It was a bittersweet moment on Thursday for DeRogatis, as he finally received a replacement Purple Heart.

It's a moment the family will never forget.

"I'm very happy that he finally got it. It made me cry," said his wife, Barbara DeRogatis.

"That's my hero, that's my father, role model, just seeing him win this award means everything to me," said his son, Nick DeRogatis.

Now the DeRogatis family awaits the Bronze Medal replacement, but they do so with a heavy heart, knowing the person to thank for the past 49 years hasn't gotten the proper thank you.

"We really would like to see something go to Louis Testa's family, for him saving his life," said Barbara DeRogatis.