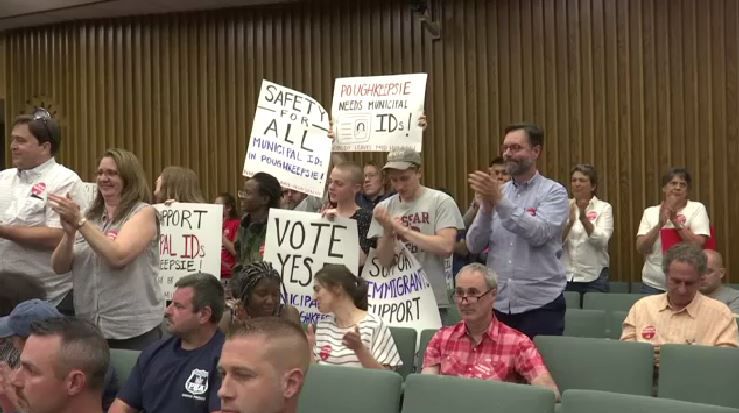 POUGHKEEPSIE, N.Y. -- A party broke out in the Poughkeepsie Common Council chambers on Monday evening when the council approved the long-debated municipal ID program by a count of 8 to 0.

Close to 100 members of the community group, Nobody Leaves Mid-Hudson, erupted in cheers once it was official.

"I'm also undocumented, and I'm a current college student," Jarim Virgen, 20, said while holding a banner in the chambers.

Virgen said he has not been able to even apply for tuition assistance at his college without a photo ID.

With this program, he thinks he has a chance.

"It's important for me," Virgen said. "I can have financial aid, and I can continue my studies."

Supporters said the program is going to allow the most vulnerable city residents to do the things that many other residents take for granted.

They include using the library, picking up children at school and reporting crimes with less headache.

"As a community, we are actively expressing that all those who reside here in our city belong here and they're welcome here," said Ward No. 2 Councilmember Sarah Salem, who sponsored the legislation.

The IDs will look official, but will only have a person's photo, name, address and date of birth.

Applicants will have to prove residence and identity using a combination of several other forms of ID such as a birth certificate, diploma, property lease or utility bill, among many others.

The point system is similar to the one used by the DMV when issuing driver's licenses.

The new law states that the city will not share any personal information with any other agency, and that any information kept is meant only to prevent fraud.

Supporters said they hope the program eventually morphs into something bigger, as similar programs have done in other cities.

They would like for the program to eventually afford people opportunities such as opening bank accounts or even applying for some jobs.

At Bronx Pie Pizza on Academy Street, the owner said that whenever he posts a job opening, about 70 percent of the applicants are people he cannot hire, because they do not have photo IDs.

He said that if he were to get assurance that the cards could be accepted with applications, it would also make his life easier.

"They'll say they have a social security number," owner Erik Ukaj said. "They'll tell me it's theirs, but there's no way for me to find out that's exactly who they are. I'd like to see something happen with the program that lets people apply [for jobs] more easily."

As is stated in the law, the program will begin within the next six months.

Members of 'Nobody Leaves Mid-Hudson' pledged at Monday's meeting to donate the machine that would print out the IDs.

The group's executive director said the group is also lobbying councils in Middletown, Newburgh and Kingston to establish similar programs.

Poughkeepsie is now the second city in the state (after New York City) to approve such a program.