The vibrant red of the Limu Lepe O Hina. This "Year of the Limu" recognizes the integral role of limu in Native Hawaiian traditions. (Kuaaina Ulu Auamo/Kim Moa)

HONOLULU — Just as poi was a staple in the diet of the Native Hawaiian people, so was limu (seaweed) — for food, medicine, and for use in cultural practices. In January, Gov. David Ige proclaimed 2022 as the “Year of the Limu” recognizing the integral role that limu plays in Native Hawaiian traditions.

“As an indicator of healthy ecosystems, a food source for many species, and a connector between Ma Uka or the uplands, and Ma Kai, the ocean, limu has the potential to teach us so much about the health of the places we live,” said Malia Heimuli in a news release from the nonprofit Kuaaina Ulu Auamo. Heimuli is the organization’s Limu Hui coordinator that will coordinate the “Year of the Limu” initiative, a statewide effort by the Limu Hui network with the goal to raise awareness about the importance of limu to Hawaii’s cultural identity and the health of the marine environment.

“The goal of the Year of the Limu is to recapture, retain, share and preserve traditional ike (knowledge) about limu for the benefit of the people of Hawaii and all those who love our island home,” added Heimuli.

During the state legislative session held in 2021, the resolution to designate 2022 as the “Year of the Limu” stalled. But community members and limu advocates, with the support of KUA and the Department of Land and Natural Resources Division of Aquatic Resources, petitioned Gov. Ige to make the designation by executive order.

One of the advocates is former Limu Hui coordinator for KUA, Wally Ito. Together with his mentor, Henry Chang Wo, Jr., the two founded Limu Hui in 2014. Ito continues the work of the Ewa Limu Project today. He wrote to Gov. Ige prior to the proclamation being made.

“Prior to western contact, limu had a major role in Hawaiian society. Limu was the salad and spice that provided much of the necessary nutrient for a healthy population. Limu was also a major source of medicine and was used in many cultural and religious practices. Nowhere else in the world did limu play a significant role in the health and vitality of the population.

“Sadly, much of what was known about this important resource has diminished over the past four generations. The reasons for the loss of this important part of Hawaiian culture are many, but the main factors are the change of our modern food systems and loss of limu habitat due to changes in the coastal land use.”

In an article for the University of Hawaii’s Sea Grant program, Ito said, “At one time there were countless different limu that were being consumed in Hawaii. Today, we would be hard pressed to get a list of 20. So, we’ve lost that knowledge of many kinds of limu.”

Ito likened limu to the plants and grasses that feed cows for the near-shore environment; the equivalent is limu. Bottom line — to bring back the fish, bring back the limu.

“I’m lucky enough to have seen what fish abundance looked like,” said Ito in a DLNR video. “Just the experience of seeing that decline made me realize we have to do something. In my marine class at HPU, (I learned that) limu is the base of the food chain. Limu is important to the environment in many, many different phases. (It’s) not only food for fish, but it’s also a habitat for crustaceans and other invertebrates, and also a hiding place for small fish.

“The key message is that limu was, and still is, important to Hawaiians and Hawaiian culture. We’ve lost a lot of that knowledge, the cultural knowledge about limu. So, the big focus of our Limu Hui is to try to bring back the knowledge.”

“We want to make a concerted effort, particularly in this “Year of the Limu,” to broaden the utilization and appreciation of limu,” said Brian Neilson, DAR administrator, in a news release. “One of the ways to address the underutilization of limu is to provide communities with more opportunities to harvest limu for consumption, medicine or cultural use. We hope to enhance these opportunities through limu restoration projects.”

Once found in abundance, limu has greatly declined within the last decade and even earlier. Therefore, a number of grassroots limu hui groups statewide have been actively planting, creating awareness and understanding about, and sharing knowledge of limu. One such group is the Waimanalo Limu Hui that holds monthly limu plantings. 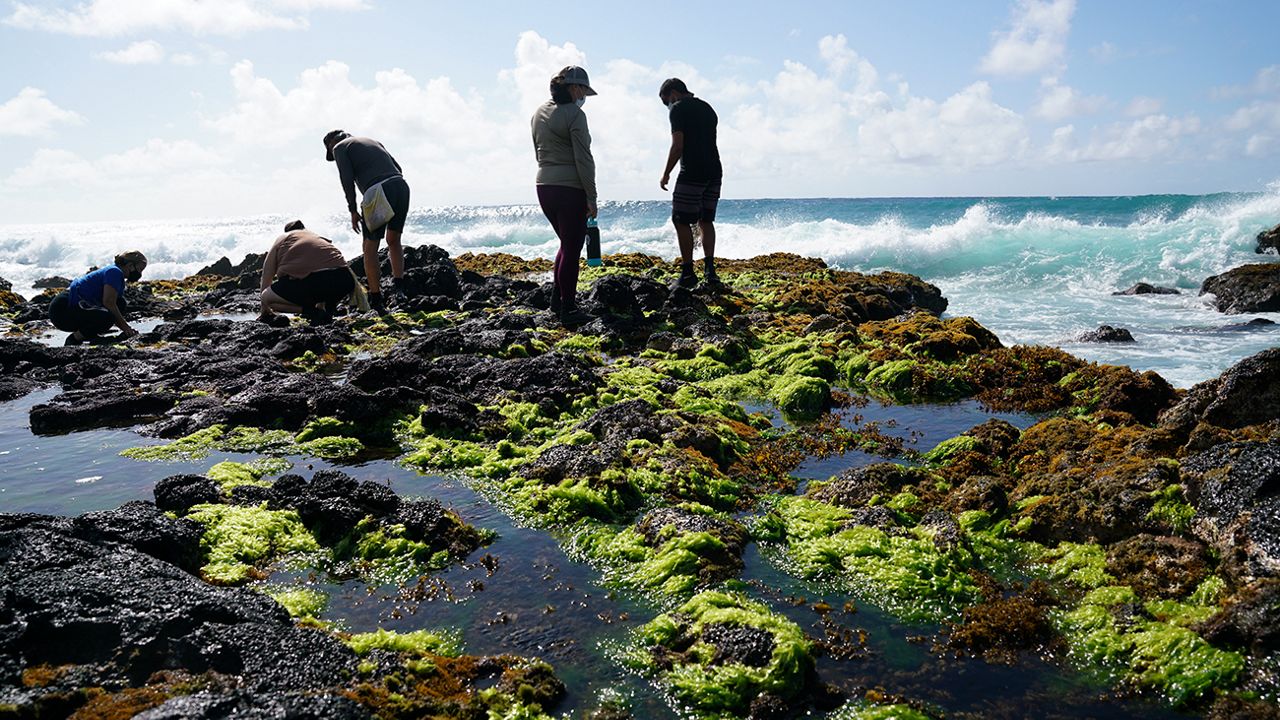 A rare sight of Limu Palahalaha in the foreground. Native limu have greatly decreased in the last decade due to development, improper harvesting, climate change and invasive limu species. (Kuaaina Ulu Auamo/Kim Moa)

Falling under the auspices of KUA, Limu Hui started in 2014 that brought together more than 30 limu practitioners from Ewa, Heeia, Kahoolawe, Kahana, Kipahulu, Koloa, Kuliouou, Lanai, Molokai, Waianae, Waihee and Wailuku. This group gathered over four days to learn, participate in discussions and grow knowledge. This was a “gathering of the gatherers,” a key networking event as kupuna and those holding knowledge of limu built trust among one another and set the foundation for collaboration toward common goals in the future.

As in many indigenous cultures, elders are the ones who primarily hold knowledge passed down from earlier generations. For kupuna holding vast knowledge of limu, the ability to share their experience to the younger generation is hindered by a resource, once plentiful, that is greatly decreased due to factors such as development, improper harvesting, climate change and other pressures. The invasive “gorilla ogo” (Gracilaria salicornia), has also taken over many island reefs and crowded out native limu.

As Limu Hui points out, “The loss of native limu runs hand-in-hand with loss of Hawaiian cultural practice and loss of generational ancestral knowledge and their spiritual identity. … The need is pressing, as limu declines continue and elders who hold traditional knowledge are aging.” 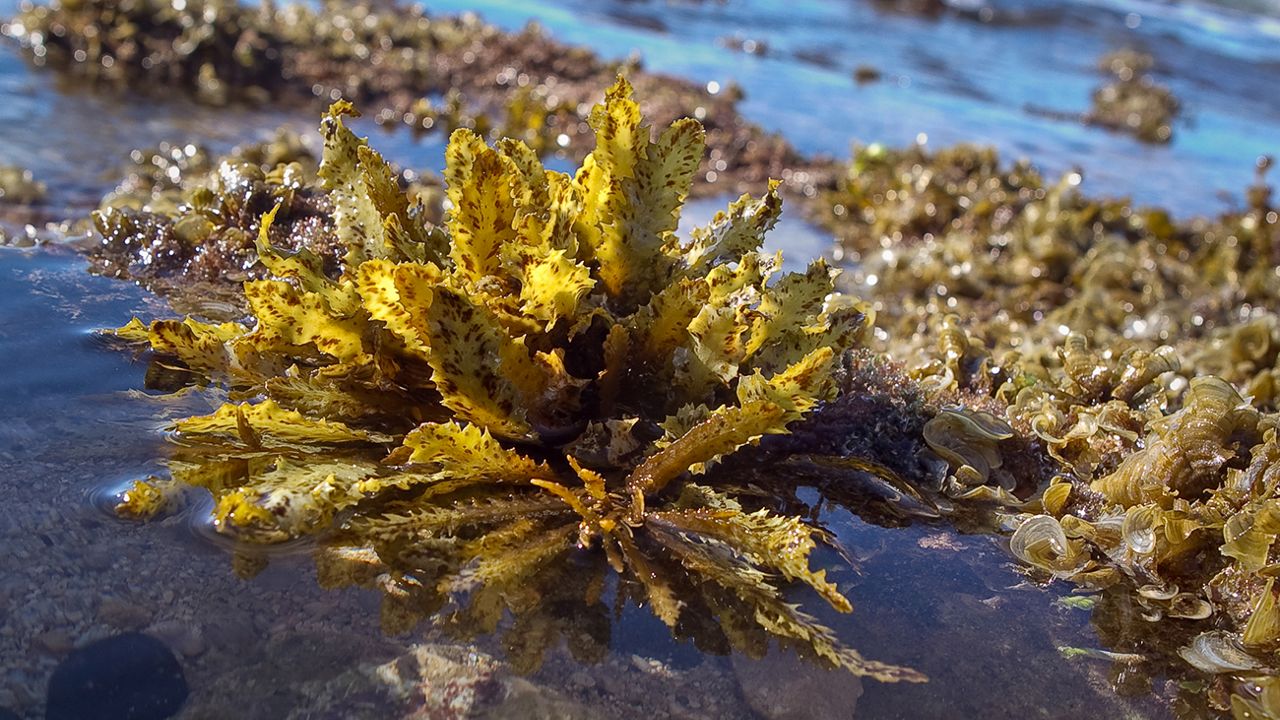 KUA and the Limu Hui will be working with DAR and other statewide community groups and organizations to plan and coordinate monthly limu events throughout the year. They will provide opportunities for the public to connect with limu practitioners, share limu stories, memories and traditions. Events will also include malama aina (environmental stewardship) workdays to clean up invasive limu, plant limu, hold educational shoreline walks, “show-and-tell” events, and workshops on limu pressing and cooking.

Find information about upcoming Year of the Limu activities on the Kuaaina Ulu Auamo calendar, as well as on their Instagram and Facebook page.

The work of “Gathering the Gatherers” will continue as KUA plans to connect Limu Hui members through interisland exchanges and virtual programs. Wally Ito agrees that these gatherings are vital to preserve knowledge and raise the next generation of limu practitioners.

The organization has also partnered with the University of Hawaii Sea Grant College Program to republish, “The Limu Eater,” by Heather J. Fortner. This limu go-to was first published in 1978 and will be re-released in May. It includes oral histories, recipes and information about the cultural uses of limu in Hawaii.

“We hope it will spark interest and culinary appreciation of limu as a local, sustainable, nutritious and ono (delicious) food resource for our island community,” said Heimuli.

Limu Hui members will also propose a resolution during this legislative session calling for the designation of limu kala (Sargassum spp.) as the State Limu.

The DLNR DAR announced additional opportunities to learn about limu through a Year of the Limu calendar, “Limu Day” event at Bishop Museum and a series of limu stories released throughout the year.