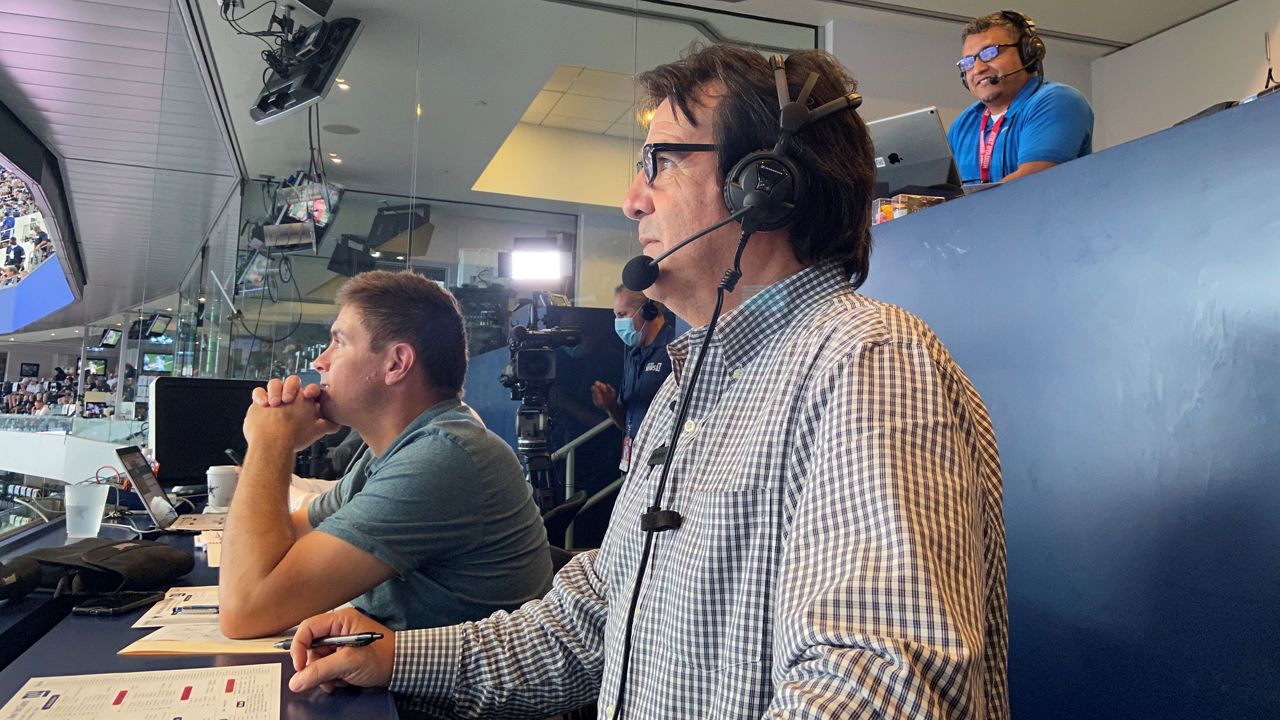 DALLAS — On a Sunday in Arlington, Texas, you can find Victor Villalba sitting in a press box, overseeing the brightest stars of the Dallas Cowboys.

The energy of a home game at AT&T Stadium almost matches the flare and excitement Villalba brings to his Spanish play-by-play calling of the Dallas Cowboys vs. the New York Giants. During the game, Villalba jumped and shouted in excitement as he described the touchdown pass Dak Prescott threw to CeeDee Lamb.

“Just getting excited, jumping out of my seat. I mean, when I’m doing the game, I don’t sit down. I’m standing up,” Villalba said.

Before Villalba put on the headset and became the Spanish voice of America’s Team, he was working in finance in Monterrey, Mexico, in the mid-90s.

“Started liking sports broadcasting, and I was kind of doing it as a hobby in Monterrey, of course, in Spanish. Before you knew it, I felt confident enough to move to Dallas,” Villalba said.

He moved to the Dallas-Fort Worth area to become an assignments editor in the Univision’s newsroom. That job would then transform into reporting and sports anchoring for Univision. Eventually, Villalba got a call from the Dallas Cowboys in 1996 to do the Spanish language radio broadcast.

“Before you knew it, I was with the Cowboys,” he said.

After a short stint with the Cowboys, Villalba traveled to Houston and Los Angeles for work, eventually making a return to the football team in 2002, and the rest is history.

“The Jones family, they make sure that we have the tools that we need to be able to bring a broadcast of high quality,” Villalba said.

The high quality broadcast came in the form of a daily TV and radio broadcast called “Somos Cowboys” at The Star in Frisco.

Villalba and one of his co-anchors, Luis Fernando Perez, report on the latest Cowboys news, discussing some of the biggest headlines of the week in studio sets.

The broadcasts reach markets all across Texas and the world. During a portion of their podcast, Perez read questions and comments from listeners in places like Mexico, Argentina and even Spain.

“Our Spanish is the Spanish that somebody in Mexico City would say, “now, those guys speak Spanish.” And this is very important to us,” Villalba said.

For nearly 20 years, Villalba has played a vital role in reaching the Hispanic and Latin Dallas Cowboys fan base.

The Cowboys remain the wealthiest sports team in the world, and their notoriety is evident within the Hispanic and Latin population.

In honor of Hispanic Heritage Month, Central and South American country flags were presented during the U.S. National Anthem at Sunday’s game, each one representing fans who filled the stadium.

With nearly two decades under his belt, Villalba has become a local celebrity in North Texas. He’s also a Spanish play-by-play caller for the Dallas Mavericks, getting the chance to call the team’s 2006 NBA Finals appearance and first franchise championship in 2011.

Now Villalba awaits the chance to be the Spanish play-caller for his first career Super Bowl win with the Dallas Cowboys.

Until then, Villalba will continue to bring the energy to Spanish listeners worldwide. “Like Dak Prescott would say, ‘Hey, there’s a lot of football to be played,’ but right now, the Cowboys are looking pretty good.”