A rendering of the proposed $110 million project to build a cap over Fort Washington Way in downtown Cincinnati. The cap would create park space and a community plaza. (Photo courtesy of Cincinnati USA Regional Chamber)

CINCINNATI — The City of Cincinnati and Hamilton County are exploring the possibility of building decks on top of Fort Washington Way as a way to better connect the Central Business District with The Banks area along the Ohio River.


Officials from both the city and county joined members of the Cincinnati USA Regional Chamber on Tuesday morning to outline the ambitious plan that could cost up to $110 million.

Fort Washington Way is a sunken highway that runs through downtown Cincinnati. It carries traffic across Interstate 71, U.S. 50, and provides access to downtown and the riverfront from Interstate 75 and I-71.

The proposed plan would create a seamless structure over the highway known as the Third Street Distributor. It would feature two blocks of tree-lined green space between Race and Walnut streets. They'd also create hardscape plazas on half-blocks west of Race and east of Walnut streets.

Developers of the plan view the plaza as potential gathering spaces for special events. In project renderings, there’s a watch party taking place for a Bengals football game. 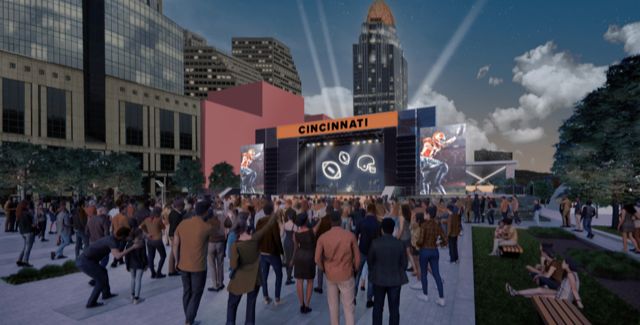 An artistic rendering of how one of the pedestrian plazas could be used if Fort Washington Way is reconfigured. (Photo courtesy of Cincinnati USA Regional Chamber)

“Uniting downtown with The Banks has been a dream for so long, it is time to make the decks a reality,” said Stephanie Summerow Dumas, president of the Board of County Commissioners. “Rarely do cities and counties have the opportunity to add multiple city blocks of prime real estate to their downtown campus.”

The development of the plan was a collaboration between the Cincinnati USA Regional Chamber, KZF Design and WSP USA.

KZF and WSP — an engineering and professional services firm — worked on the reconfiguration of Fort Washington Way more than 20 years ago. That formation is still in place today.

Back then, the goal was to narrow the highway to add room for The Banks, new stadiums for both the Cincinnati Reds and Cincinnati Bengals, and create Smale Riverfront Park. But today the layout doesn’t fit the contemporary needs of an urban city, according to Jill P. Meyer, the Chamber’s CEO.

KZF described the current formation of Fort Washington Way as creating a chasm between Second and Third streets that disconnects the riverfront from the urban core.

The new plan would complete the long-term vision in place for more than two decades, Meyer said.

“Business leaders wisely invested in foundations that make today’s plan possible,” she said. She added that the “long-planned for” proposal is an opportunity to create a “one-of-a-kind regional asset.” She feels it has the potential to “spur economic development” while also creating a “vibrant space for the region.”

WSP has worked on Fort Washington Way since the late 1990s. Jared Love, the firm’s assistant vice president, said his team wants to help to “close the gap.”

“WSP had a great team with the foresight to plan and build the infrastructure into the original project to allow for the development of these decks now,” Love added.

Paying for the 'transformational' project

The new park’s development would cost somewhere between $15 million to $20 million. The cost was based on the experience developing Smale Riverfront Park. Smale opened partially in 2012 and was fully opened in 2015.

To help cover the costs of the project, the city and county announced they will apply for a federal planning grant. It would come from the Reconnecting Communities program, created as part of the Bipartisan Infrastructure Law. It is the first-ever federal program dedicated to reconnecting communities previously cut off from economic opportunities by transportation infrastructure such as highway construction. 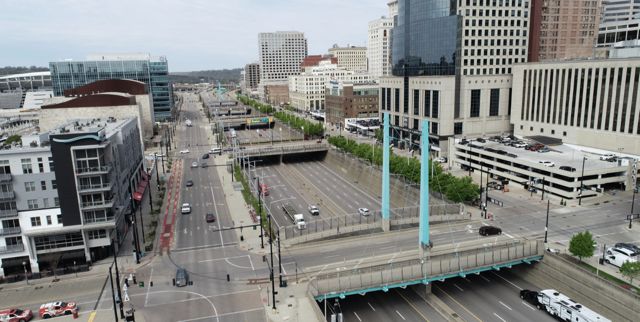 Funding supports planning grants and capital construction grants, as well as technical assistance. Eligible projects can use funds to restore community connectivity through the removal, retrofit, mitigation, or replacement of eligible transportation infrastructure facilities, according to the U.S. Department of Transportation.

The program has $1 billion in discretionary grant funding available over the next five years.

“Reconnecting our communities, and creating cohesive spaces that all residents can access and enjoy, has the power to unlock Cincinnati’s fullest potential,” said Cincinnati Mayor Aftab Pureval. “The Fort Washington Way planning grant is a major step toward making a transformational impact on the face of our city, and I’m excited by our collaborative work to pursue this incredible opportunity.”

The Ohio-Kentucky-Indiana Regional Council of Governments (OKI) supports the grant application, according to Jake Hesseling, who handles communications for the organization. He called the project an “excellent fit” for the Reconnecting Communities program.

OKI works with communities in eight counties to advocate for federal funding to support local and interstate transportation projects.

In most cases, the council has final say on the spending of federal dollars on surface transportation projects in the region. OKI doesn't expect to play a formal role in this project given the nature of the funding source, Hesseling said. But he noted OKI staff will be available to support any related data needs.

“The project will be a boon for the region once it’s realized,” he added.

How did we get here?

The Fort Washington Way project would expand upon the framework of the Central Riverfront Master Plan published in 2000.

The plan involved the result of a public participation planning process started in October 1996. Hamilton County and the Cincinnati engaged Urban Design Associates to prepare a plan to give direction in two key areas: 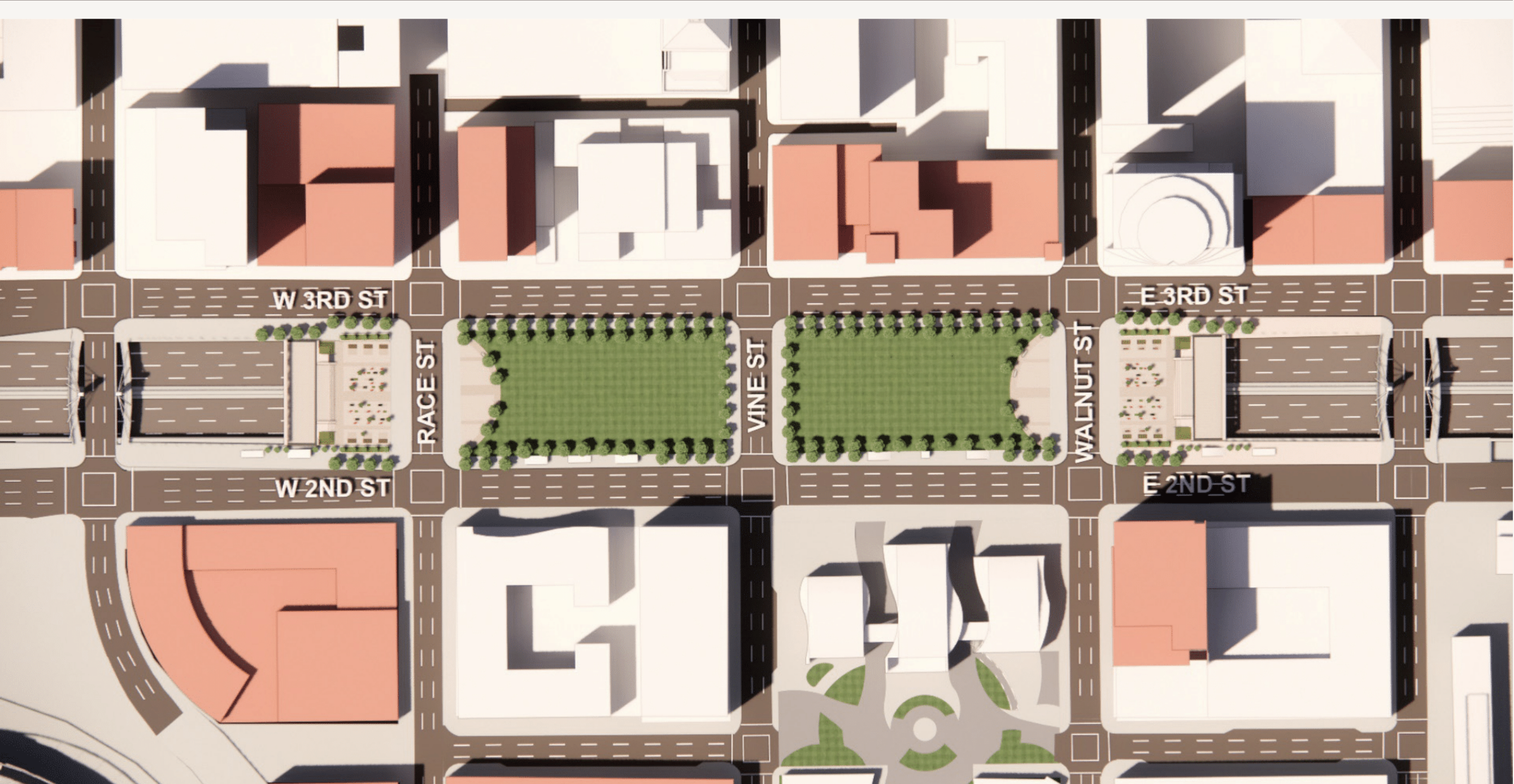 An overhead look at the proposed layout of a new-look Fort Washington Way. (Photo courtesy of Cincinnati USA Regional Chamber)