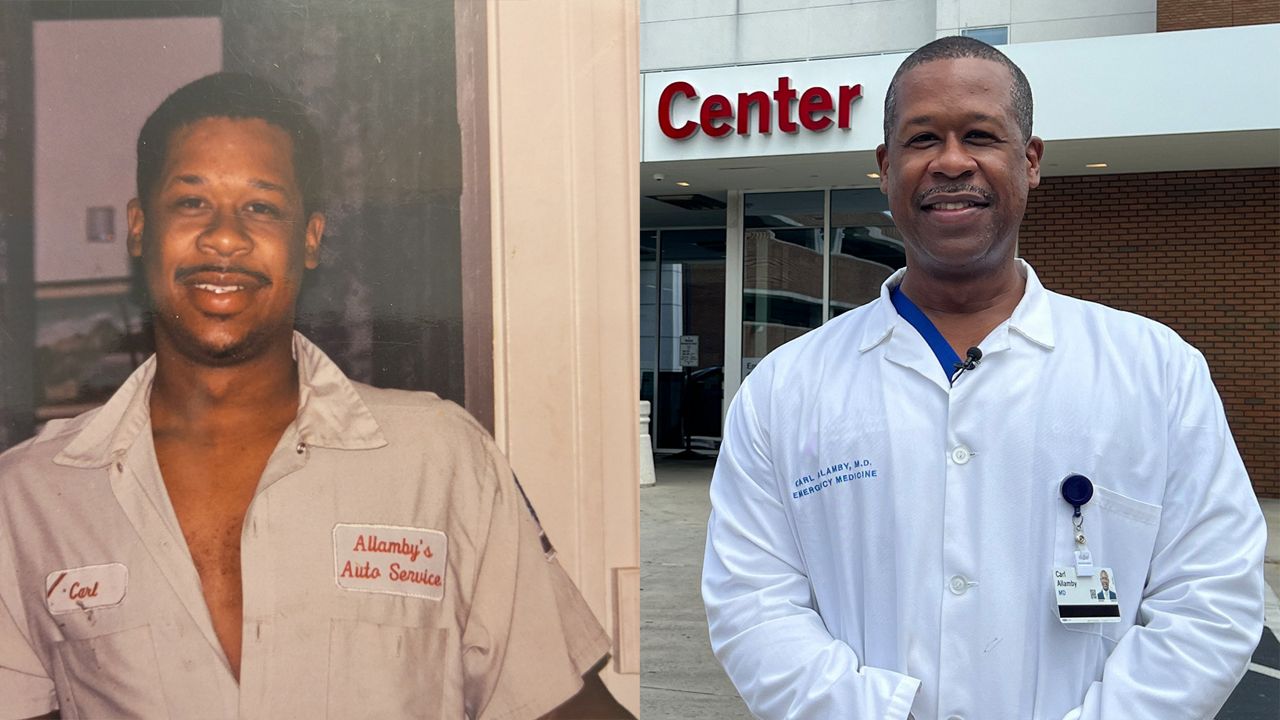 From mechanic to physician: One doctor says it’s never too late to achieve your dreams

CLEVELAND — After 25 years as an auto shop owner, an east Cleveland native headed to medical school and become a doctor.

At age 51, Dr. Carl Allamby is now an attending physician at the Cleveland Clinic.

“I’ve been working on things my whole life,” he said. “It’s just people now instead of cars.”

Allamby is in his first few weeks as an emergency medicine physician at Cleveland Clinic’s Hillcrest Hospital, but he spent more than two decades as the owner of an automotive business.

“I was ready for a change,” he said. “And I felt like my life came to a point to where I wanted something a little bit different for myself.”

It’s week 2 in the ER at @ClevelandClinic Hillcrest Hospital for Dr. Carl Allamby. The East Cleveland native finished medical school at age 47 after 25 years of owning his own auto shop. Hear his message about why you should never give up on your dreams soon on @SpectrumNews1OH pic.twitter.com/cdPTXnpkBi

Allamby grew up in east Cleveland, and as a child, he thought his dream of becoming a doctor was unrealistic.

“Just wasn’t a real opportunity in the neighborhood where I grew up and the financial constraints that we had in my own family,” he said.

Outside of high school, Allamby had no additional formal education, and he poured his energy into becoming a car technician. In an effort to expand his business, he enrolled at Ursuline College to earn a business degree in his late 30s.

Before he could graduate, though, he needed to pass a biology class.

Initially he was resistant to the course, as it really had nothing to do with business. But now he’ll tell you, that class changed his life.

“And within the first hour of being in that class I knew that this was something I wanted to pursue a little bit further,” he said. “All those ideas of becoming a physician when I was younger kind of came back to me.”

With the support of his wife and children, he took pre-med courses before heading to medical school at Northeast Ohio Medical University.

That initial biology course was now 12 years ago.

“I remember thinking about that when I was younger,” he said. “That you know all these years are going to pass that you’re going to be studying and that you’re gonna have all these challenges, but those years are gonna pass anyway and you may get to the end of those years and look back reevaluate what you’ve done and did you really accomplish the things that you had in your heart, that you felt like you were capable of and as long as I could answer yes that I tried my hardest even if I didn’t make it all the way through, I still would have been satisfied that I tried my best. I gave it my all.”

He said repairing cars and treating people aren’t as different as people think, that both jobs come down to pretty similar things: compassion and keeping promises. In fact, sometimes he even sees old customers of his as patients.

His story has attracted international media attention, and he wants to prove it’s never too late to prove who you were meant to be.

“You know, the fact that I’m much older, that I had a career before, that I have children, that I have grown children — I have a grandchild who is 8-years-old — the fact that I grew up in an impoverished area and that I’m African American, I could probably pick almost any excuse of why not to do something that was really challenging,” he said. “But despite all of those obstacles and all of the things that could have prevented me from getting to where I am today, I’m still here. I think that’s been a really motivating factor for a lot of people.”