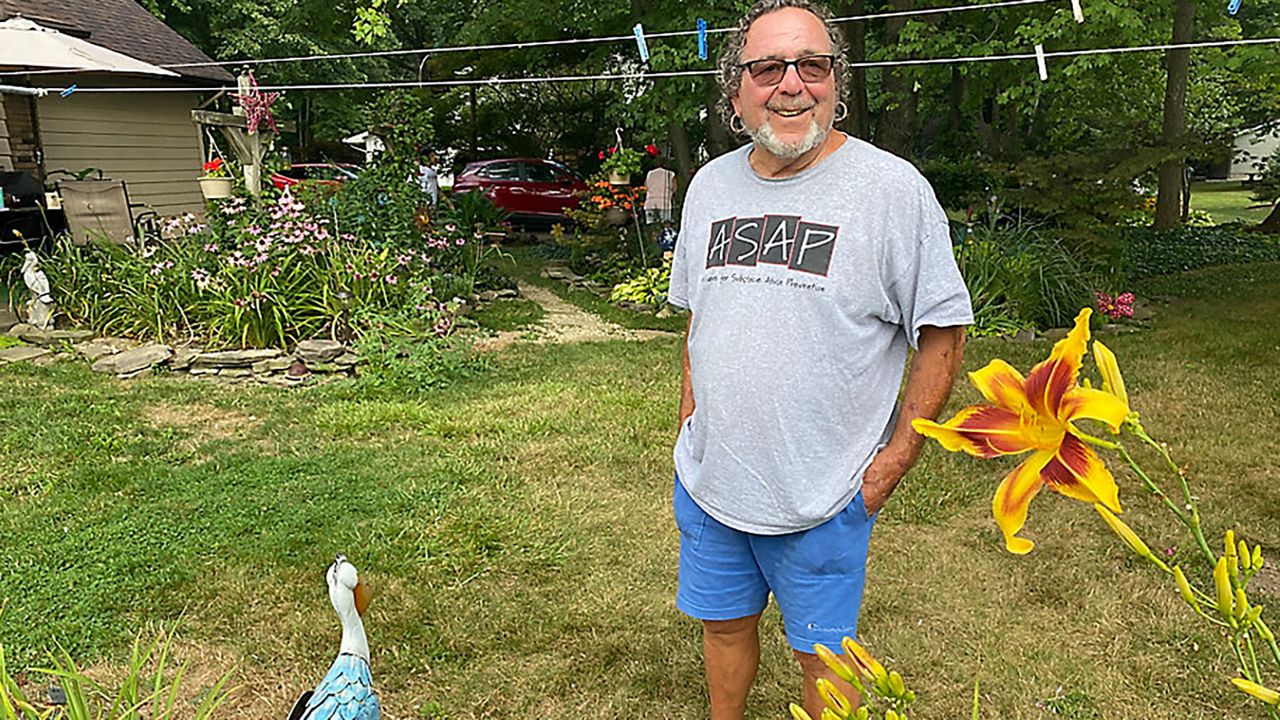 Rocco Greco had been hospitalized around the holidays in 2020 because of complications from COVID-19. (Micaela Marshall/Spectrum News 1)

He has a deep appreciation for nature and all things beautiful, such as flowers.

“Everything’s connected," Greco said. "Nature, everything. The plants. They all got roots. They’re all connected.”

His wife, Jan, introduced him to gardening, and he likes to name each flower in their backyard garden things like “Implausible Optimism.”

“If you don’t have hope, dear, you’ve got nothing," he said.

But his life isn’t always rosy. The 67-year-old was hospitalized around the holidays in 2020. He said he nearly died after complications from COVID-19.

The Cortland man was life-flighted from a hospital in Warren to University Hospitals Cleveland Medical Center.

He spent 24 days on a ventilator and 40 days in the hospital’s Medical Intensive Care Unit (MICU).

His family was by his side the whole time.

Greco said he didn't know what happened to him when he came to.

On Valentine’s Day in 2021, Greco was well enough to be discharged from UH, but then he spent some time in a rehabilitation hospital.

Even after he left the MICU, the effects of his stay and illness lingered.

“A lot of physical and a lot of mental things going on," he said. "A lot of anxiety.”

University Hospitals said Post Intensive Care Syndrome is common among patients who survive the ICU. The condition comprises of health problems that persist after a critical illness is treated.

Weakness, brain fog and anxiety are some symptoms Greco experiences.

He lost quite a bit of weight while on a feeding tube in the ICU, but gained it back shortly after returning home.

All of that led him to the Post-ICU Recovery Clinic at UH.

“My blood sugar went up," he said. "My blood pressure went up."

The Post-ICU Recovery Clinic aims to help patients and their families recover after leaving the ICU. The clinic centers around a peer support group and exams from a medical team including occupational and physical therapists as well as a social worker and time with a chaplain.

Greco also started journaling each day as a way to combat his cognitive issues.

“My short-term memory is starting to get a little bit better," he said.

And feeling better means more time with family and his dog, Freddy, and more time in the nail salon.

Jan collects nail polish, and his granddaughter got him into pedicures.

“'Why don’t you put colors on?'" his granddaughter asked him. "And that’s all it took. I started that, and it’s history.”

His grandson’s wrestling team even painted their toes as a sign of support during Greco’s hospital stay.

This retired park ranger is unapologetically himself. He’s grateful to be alive and has met others he can relate to through the Post-ICU Recovery Clinic.

“And it makes everyone feel better because you know you’re not the only one," Greco said.

Five-point-seven million people are hospitalized with critical illnesses each year in the United States, according to the Association of American Medical Colleges.

Muscle weakness is a common PICS symptom that can interfere with bathing, dressing or household chores, according to the Society of Critical Care Medicine (SCCM).

Below are some statistics regarding how frequently weakness occurs in PICS patients to consider from SSCM:

About 30% to 80% t of patients have problems with memory, word-finding or “brain fog," and about 30% experience depression, anxiety or PTSD.

University Hospitals estimates about half of its ICU patients develop PICS.

The term Post Intensive Care Syndrome was coined in 2012. Previously, it was assumed that when someone survived the ICU, they would return back to every day life. But the leader of the UH Post-ICU Recovery Clinic, Janet Kloos, said that is not the case.

“Now we’re trying to teach patients and those of us in our health care community that this exists so that patients don’t think, 'what’s wrong with me that I’ve got these lingering problems?' And we want to raise awareness with health care providers so that we can offer the services and resources that improve their recovery," Kloos said.

The UH Post-ICU Recovery Clinic is an expansion of the ICU survivors support group that began in 2014. In the last two years, about 60 patients have received care from the clinic.

Kehllee Popovich, a nurse practitioner with the clinic, said treatment goes back to the basics.

“When we look at what makes these patients get better and feel better—it’s just the four pillars of health," Popovich said. "Real food, sleep, stress and movement. And when you get to those root things and when the patient internalizes that knowledge, it really helps them heal."

UH said risk factors for PICS may include a stay in the ICU that lasts more than 72 hours and being placed on a ventilator for more than 48 hours. A patient who has experienced delirium, sepsis and/or Acute Respiratory Distress Syndrome (ARDS) are some other indicators.

The UH clinic is open two Fridays a month from 8 a.m. to noon, and about half of the patients are seen via telehealth.