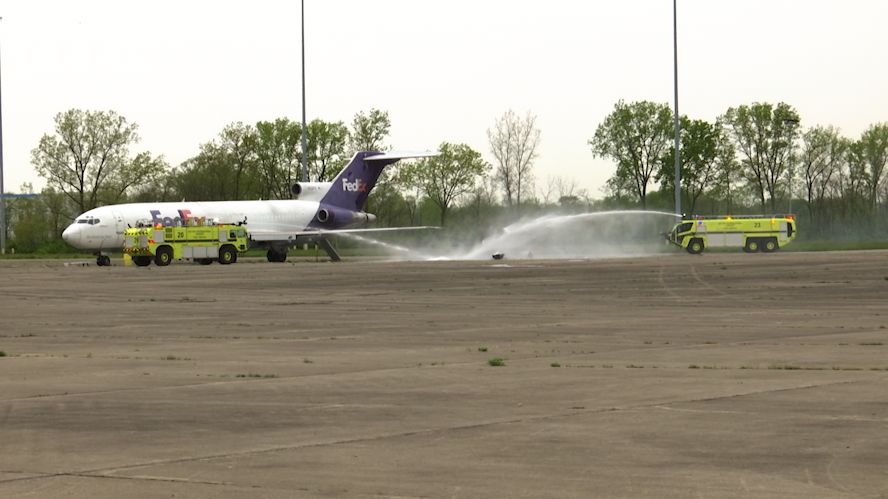 Firefighters work to extinguish a fire on a runway during a simulated training event at Dayton International Airport on May 11, 2022. (Tino Bovenzi/Spectrum News 1)

In the scenario, a passenger plane crash landed and caught fire with 61 people, portrayed by plywood cutouts, on the runway, all with various injuries.

Dayton International Airport personnel had minutes to arrive and extinguish the flames before more injuries occurred.

Firefighters arrived in minutes to put out the flames. Rookie firefighter Brody Osborn was one of the first on the scene. He had never been in this situation before, so he saw the training as invaluable.

“It was excellent,” Osborn said. “Hands-on training, just the response time getting out here, letting me know how long it takes. Because, you know, these trucks, it takes a minute to get up to speed, and we’re carrying a lot of water with us. So it takes us, you know, a little bit to slow down with them too.”

They moved the plywood cutouts that represented the people injured in the crash to triage or moved them by care flight or ambulance.

“We always want to train for the worst and hope for the best,” McCoy said. “So, obviously, no one ever wants to be involved in a plane crash. But if it were to occur, we want to be able to respond in the fastest manner with the most efficient technology and ensure that all our policies and procedures are where they should be to ensure we have that effective and efficient response.”

Nearly a dozen different agencies took part in the training, which was completed successfully with no injuries or incidents.

An evaluation will be completed to suggest how the teams can work more efficiently to save lives.

After the training, Osborn was confident he and the other first responders will be ready the next time an emergency happens.

“Great to see this team effort,” Osborn said. “Everybody coming together, working as one team, getting the goal accomplished and patients taken care of.”