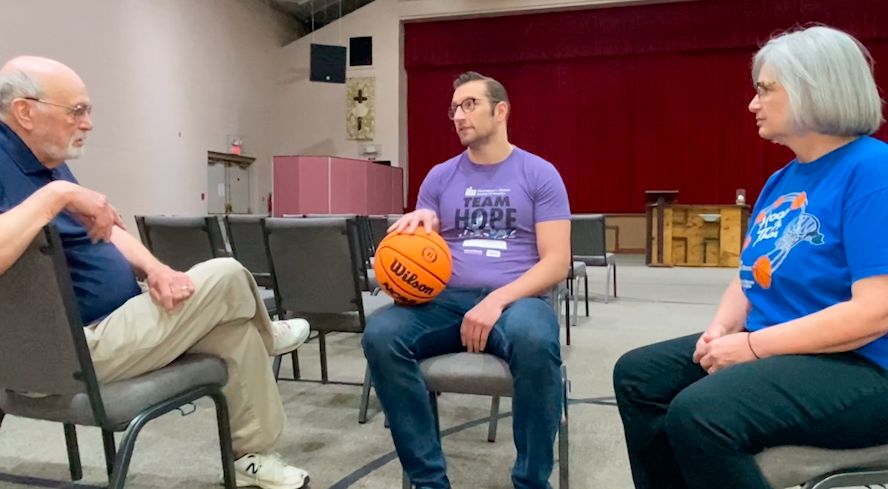 The Central Ohio Hoopathon at will be at St. John's Lutheran Church on April 23. (Dennis Biviano/Spectrum News 1)

COLUMBUS, Ohio — Columbus resident Zach Vaughan recently made the life-altering decision to move home from the Netherlands to take care of his father Roger, who is living with a rare genetic condition called Huntington's disease.


The disease causes a breakdown of nerve cells in the brain, according to the MayoClinic. This leads to other issues, affecting functions such as walking, talking and thinking.

Vaughan also lost his grandfather to the disease, and because of his family's advocacy over the past couple of decades, being named -president of the local Huntington's Disease Society of America - Central Ohio came quite naturally to him.

“I want to help the community. I think that a lot of times unfortunately with this disease, like I mentioned, people don't want to talk about it. It's hard to know that you and your siblings could be at risk,” said Vaughan.

There is no cure for Huntington's, and the disease is described as having ALS, Parkinson's and Alzheimer's simultaneously. It usually strikes between the ages of 30 and 50.

Vaughan said doctors diagnosed his father with it two decades ago. He is now showing symptoms and dealing with the harsh reality.

“It can be a bit frustrating especially for my mom when he says 'I'm fine. I don't have symptoms. Everything is going fine' because it sort of negates all the feelings that she's having when she's frustrated that he's not ready to go, and she's ready to go, and he forgets something important or that he has sort of an emotional outburst,” said Vaughan.

But the Vaughan family isn't alone in this fight.

At 84-years-old, Pleasantville resident Norm Baldwin continues his own fight.

Baldwin lost his wife of 58 years, Bonnie, in 2018 to Huntington's, and his son continues to battle the disease.

“Lot of people looked up to her, just by her attitude, and before she became symptomatic, we were foster parents — 48 foster kids went through our house, and she was just an excellent, excellent foster mother,” said Baldwin.

Baldwin, his daughter Lori and Vaughan will team up on April 23 to host the Central Ohio Hoopathon at St. John's Lutheran Church in Grove City.

All of the funds raised will go directly to research and to families affected by the disease.

“Twenty-five years ago, I figured you can sit back and do nothing and let things take its course, or you can get into the fight. And so, I decided at that time to go head first into this thing,” said Baldwin.

For Vaughan, he will continue to educate others about the disease and is hopeful there will one day be a cure. As for his message to his father, he'll always be there to comfort him in this time of need.

“I just want him to know and I think he does know how much that I love him and care about him, and it's not his fault if I am positive, so I haven't been tested yet. But it's something I do think about a lot.”

For more information about the event, Huntington's disease or to donate, click here.