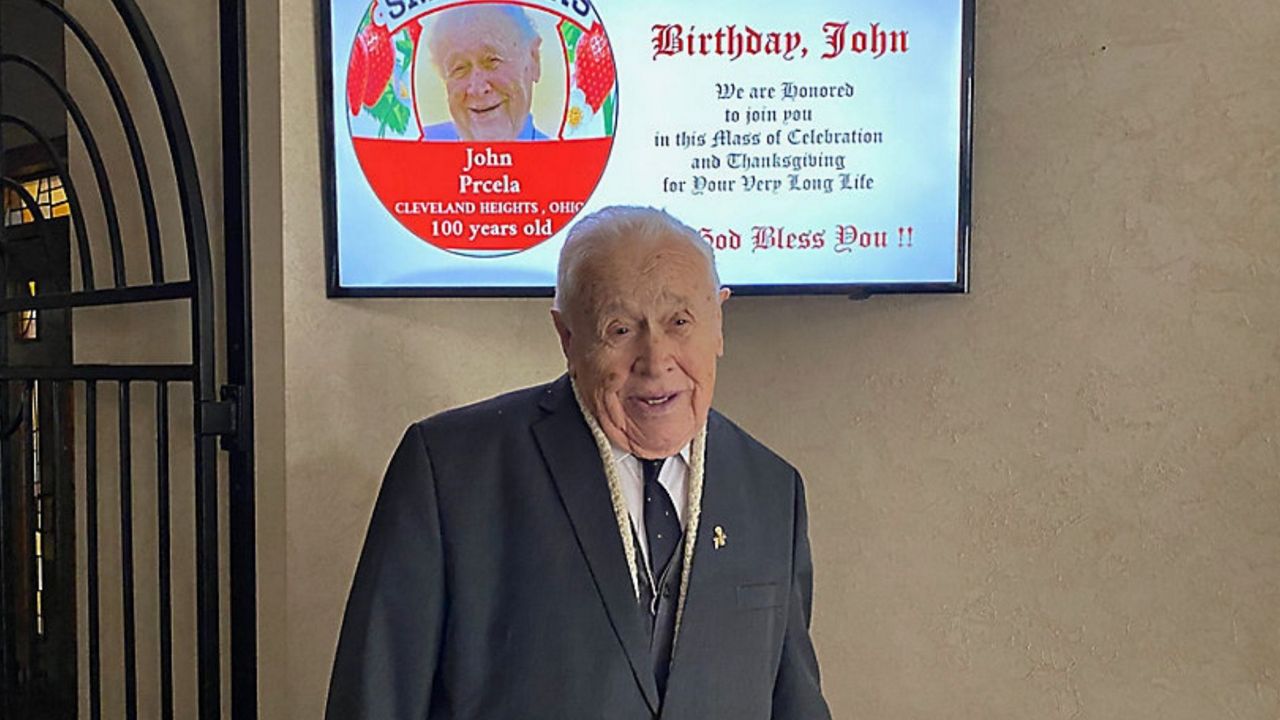 John Prcela takes a picture in front of a birthday message on a television monitor at his church in Cleveland, OH. (Jade Nash/Spectrum News 1)

CLEVELAND — Some people say life gets better with age. John Prcela just might agree with that theory, as he celebrated becoming a centenarian.


Prcela is as active as ever at the age of 100. He works out three times a week at the Peter B. Lewis Aquatic & Therapy Center.

“This keeps me young,” Prcela said, doing exercises with weights in the pool.

Every morning when the Croatian native wakes up, he said he takes a sip of his favorite Croatian brandy, Maraska Slivovitz.

“This is my daily medicine,” Prcela said. “One shot early in the morning to keep my heart pumping.”

March 9, Prcela became a part of a small percentage of people who get the chance to live a full century. It’s a milestone that called for many celebrations, like two specially dedicated masses at churches he’s attended in Cleveland.

“Oh my goodness,” Prcela said as he greeted a friend in the aisle of Sacred Heart of Jesus Parish.

The night of Prcela’s birthday, his immediate family threw him a pizza dinner that was complete with a cake filled with 100 candles.

“My job here on Earth is not yet finished. And this is the rest, the first day of my life—of the rest of my life,” Prcela said in a speech to his family.

He added he was celebrated at the aquatic center and with an open house for all of his friends and family.

At the open house, Prcela welcomed his guests, saying, “Smiling friends, I love you.”

So how did the retired educator and author start the second century of his life? By looking back upon the lifetime of memories that he shared with others.

“There were so many great moments,” Prcela said.

At his home, upstairs in the study, he recalled escaping the Socialist Federal Republic of Yugoslavia as a young Franciscan.

“The greatest moment in my life was when I decided to leave,” Prcela said.

He talked about marrying his late wife, Amelia Prcela, in Spain.

“I was rejected by many girls, but not by my chosen one. She fell in love with me, so to speak at first sight,” Prcela said.

To top them all, he picked serving in his role as “dad” and “papa” to his four kids and eight grandchildren as a core memory.

“The family is the heart of the society,” Prcela said.

Prcela credited his fortunate and fulfilling journey to his Catholic faith and a sacred devotion to his muse.

“I would dedicate every moment of my life to the mystery of St. Joseph,” he said.

They’re ideals that the centenarian said he’ll carry with him, even if he lives another 100 years.