The University of Dayton has hosted the First Four since 2011. (Spectrum News 1/Casey Weldon)

CINCINNATI – To some cities, hosting a round of the NCAA men’s basketball tournament is a special occasion. But for Dayton, Ohio, it’s become an annual tradition that celebrates the city's rich basketball history.


For the past two decades, the Gem City and the University of Dayton have served as the hosts of the play-in round of the tournament.

Since 2011, the University of Dayton Arena has been the site of the First Four, a series of games over two days to decide the last four programs to qualify for the 64-team bracket.

UD Arena has hosted 125 NCAA Tournament games, by far the most of any venue in the country.

The 2022 First Four games tip off Tuesday night. But events started Sunday even before the teams were announced with the Big Hoopla, a mixture of community events around downtown Dayton.

“It’s great to be back on Selection Sunday and getting ready to host the First Four,” said Scott DeBeolt, who oversees all the university’s athletic facilities, including UD Arena.

DeBolt and a team of 40-50 people got to work shortly after the girls' state basketball tournament wrapped up on Saturday. They spent several hours on Sunday and parts of Monday laying down a new hardwood playing surface. They also added NCAA signage and banners throughout the arena.

On Monday, they added some team specific signs and logos after the teams were revealed on Sunday night.

This year the First Four features No. 16 Texas Southern vs. No. 16 Texas A&M Corpus Christi and No. 12 Wyoming vs. No. 12 Indiana on Tuesday. On Wednesday, No. 11 Rutgers plays No. 11 Notre Dame. Probably the biggest game of the midweek matchups is No. 16 Bryant vs. No. 16 Wright State, which is about 10 miles from Dayton’s campus.

“It’s always great to have a team close by. There are limited tickets available, so I’m sure those will get gobbled up a little quicker than usual,” DeBolt said.

The intricacies of hosting the First Four

DeBolt said planning for the First Four is a “365 day a year operation.” They’ve already started planning for next year’s tournament.

“The University of Dayton and the City of Dayton have been crucial partners of ours in executing the tournament,” said Danny Haynor, the associate director for the men’s basketball championships for the NCAA.

Haynor said hosting the First Four is unique, especially considering the short turnaround period. The games are played just two days after the field is announced. The teams – and some of their fans – started arriving Monday. 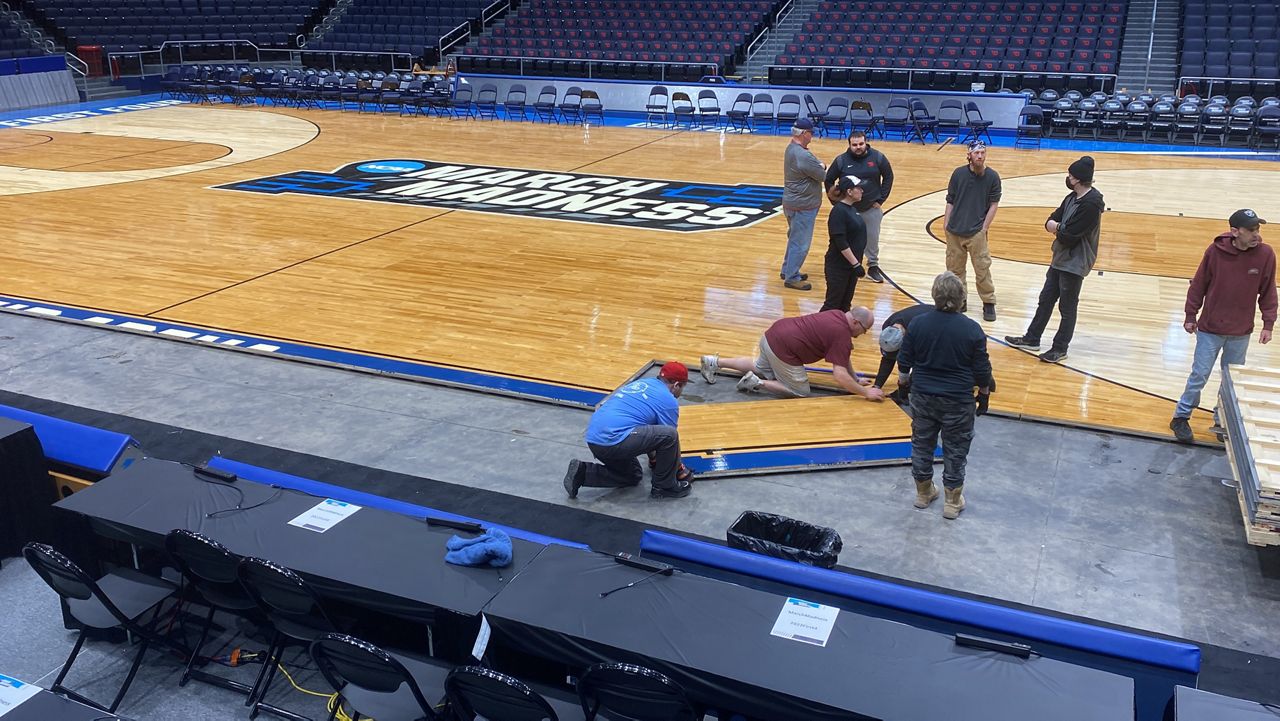 A team of 40-50 individuals spent several hours on Sunday putting down a new floor at UD Arena ahead of the First Four games to be played on the court this week. (Spectrum News 1/Casey Weldon)

“Dayton has proven to be able to handle that and has exceeded our expectations and being ready and being prepared for those teams,” Haynor said. He added the local organizing committee does an “excellent job” of supporting the event. Dozens of volunteers work to help make the four games possible.

The NCAA engages host sites months before the tournament. There’s a detailed “guidebook” that each site and city has to learn cover to cover.

Tournament officials have the hotels reserved well in advance, but Selection Sunday means connecting those hotels with the schools and coordinating with team officials on a whole host of things, like meal requests. They also have to update logos and create game-specific signage.

“We print all of that Sunday evening and drive it over to Dayton from Indianapolis that night,” Haynor said. “A lot of the legwork is done ahead of time but all that team-specific stuff happens in that 24 hours after the teams are selected.”

Getting the team to UD Arena can be a bit more of a challenge on short notice. Haynor said Dayton is “centrally located” which is a “plus” because none of the teams are forced to fly “all the way across the country” to get to UD Arena.

“The winning teams need to be able to quickly get to their next tournament site because they’ll be playing again in a couple days,” he said.

The First Four has become about more than just basketball in Dayton.

While there won’t be a ton of out-of-town visitors, there will be some. And for many of them, it’s their first exposure in many cases to the Dayton area, according to Holly Allen, vice president of marketing and communications for the Dayton Area Chamber of Commerce.

She described it as a “showcase” for Dayton developing downtown, which features several new breweries and restaurants as well as the renovated riverfront district. Several new tourist-friendly businesses have popped up downtown since the last time Dayton hosted the event in 2019. 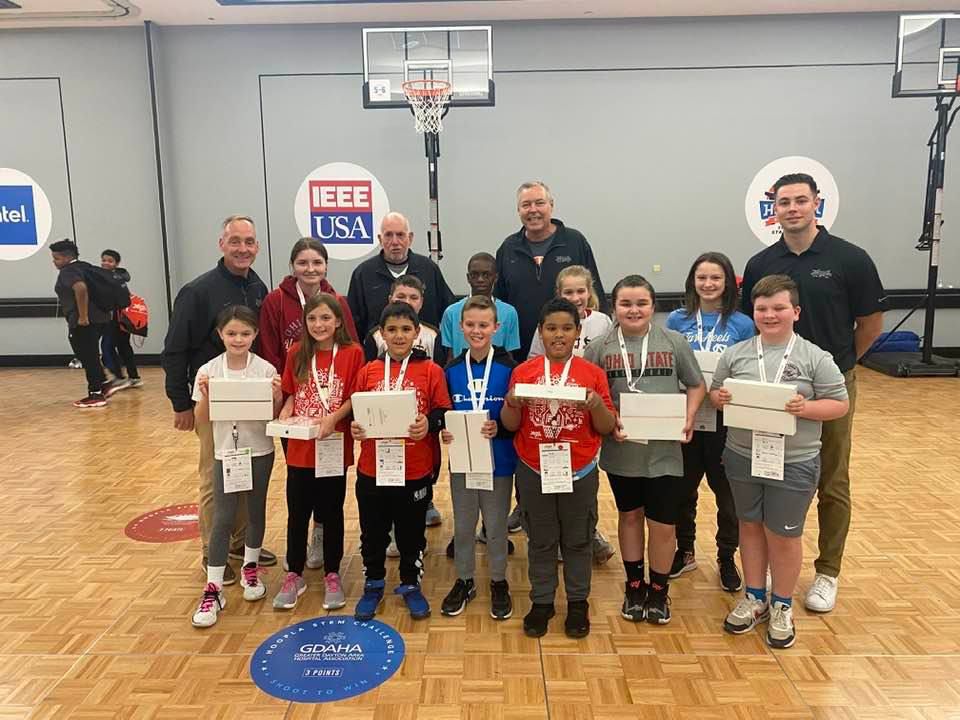 Winners of the STEM Challenge during the Big Hoopla. They will be at half court Tuesday during the first game of the First Four. (Photo: Courtesy of The Big Hoopla)

“The city and its residents really go all-out to celebrate the First Four and welcome guests,” Allen said. “I would argue that no other city in the country could host the event quite like the Dayton region.”

The Dayton Chamber said the First Four has an estimated $5 million economic impact on Dayton. That includes spending on things like hotel nights and meals at local restaurants or beers at local sports bars and breweries.

Allen expects a big show of support for the Wright State team.

“The event has all these legs that reach out to so many different industries,” Allen said. “You've got people coming to Dayton who are staying at a hotel, they're going out to eat or they're stopping by a convenience store to grab a few things while they're here, all those things make an impact on business owners throughout the region.”

While most of the attention will be paid to the games taking place Tuesday and Wednesday, the First Four is really a four-day event. Several years ago, the local organizing committee created the “Big Hoopla,” a mixture of events on Selection Sunday, to get the city excited for the games.

Events included a four-mile run that begins on the UD campus. There’s also a family festival in the Oregon District that features interactive displays, live entertainment and plenty of places to watch the tournament field be announced.

Practices at UD Arena are open to fans on Monday and Tuesday as well.

One of the biggest elements of the Big Hoopla is the ticket giveaway to local military members and their families who work at Wright-Patterson Air Force Base. This year they’ll donate their 100,000th ticket since 2012, according to Terry Slaybaugh, chairman of the local organizing committee for the First Four.

Traditionally, the tournament features the Wright-Patterson AFB Honor Guard and the National Anthem is sung by a member of the Air Force Band of Flight. They’ve also held a swearing-in ceremony for new Air Force recruits during the games.

“We always talk about the economic impact of the tournament and what that brings to the community. But the main reason we do this is to recognize our military families in the Dayton region, and be able to show them how much we appreciate the sacrifices that they may make for us and for our country,” Slaybaugh said.

Haynor couldn’t speak to the initial decision as to why the tournament ended up in Dayton, but he knows why they keep going back.

“The crowds are always good, they have a great basketball support, great basketball history in this city. But in terms of running the tournament, they know the ins and outs from hosting it every year and have been able to adapt and change with us,” he said.

Dayton is on the smaller side from an attendance standpoint. For later rounds, the NCAA ends up in buildings that can accommodate larger crowds. But Dayton is a good first for the play-in games. Haynor said they “usually do a good job of selling out or coming close to a sellout.”

DeBolt said to him it feels like the whole community rallies behind the First Four. 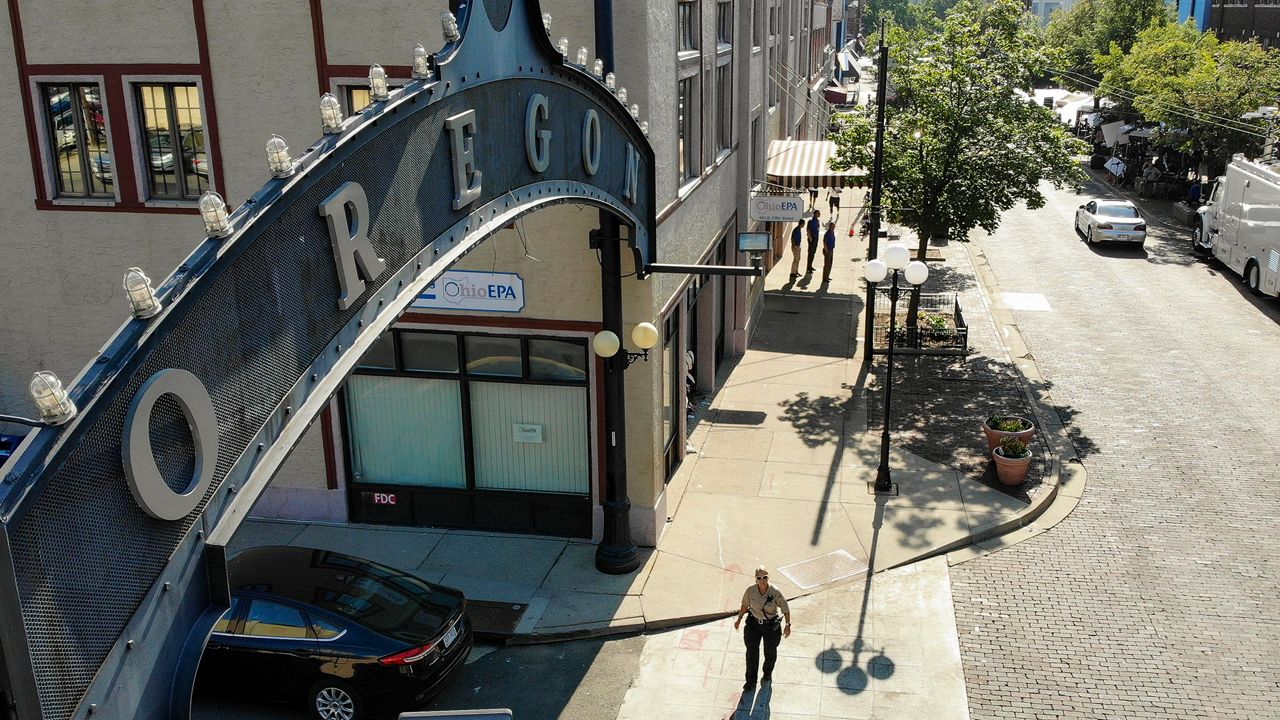 “Obviously the NCAA takes a look at that and says, you know, they pack the house every year, teams love their experience while they're here,” he added. “It's just kind of that Midwest hospitality that keeps them coming back.”

Peter Titlebaum, a professor at UD, has written extensively on the City of Dayton and UD Arena's relationship with the NCAA in terms of college basketball. He said that history dates back to the late UD athletic director Tom Frericks, who was “central to Dayton’s connection with the NCAA at a time when their influence was increasing.”

Frericks leveraged the Flyers basketball success in the 1960s to get the school to build UD Arena. It debuted in 1969.

“The arena was so state-of-the-art, so crazy for the time period. College facilities weren't that big. It said to the world that Dayton wanted to be the hub of college basketball,” Titlebaum said.

Dayton hosted NCAA Tournament games “pretty regularly” prior to the expanded field, Titlebaum said. But the creation of the play-in game in 2001 was a “game changer.” The expansion to a 68-team field made the Dayton round much more significant.

With the exception of 2019, at least one of the First Four winners has advanced past the first round of the tournament every year since the format's inception. Five of them have advanced to the Sweet 16 and VCU made its way to the Elite Eight in 2011.

“I use the expression all the time that if you roll out a ball, you can get 13,000 people to come watch in Dayton, Ohio, which is fascinating,” he said. “UD makes sure that these teams have a chance to play in front of a sold-out crowd or one darn close to one.”

Titlebaum credited the residents of the Miami Valley region for buying into the idea that the road to the Final Four starts in Dayton, Ohio.

Dayton will continue to host the NCAA Tournament First Four through at least 2026. The next bid process for years 2027 to 2030 will probably take place in the next year or two. 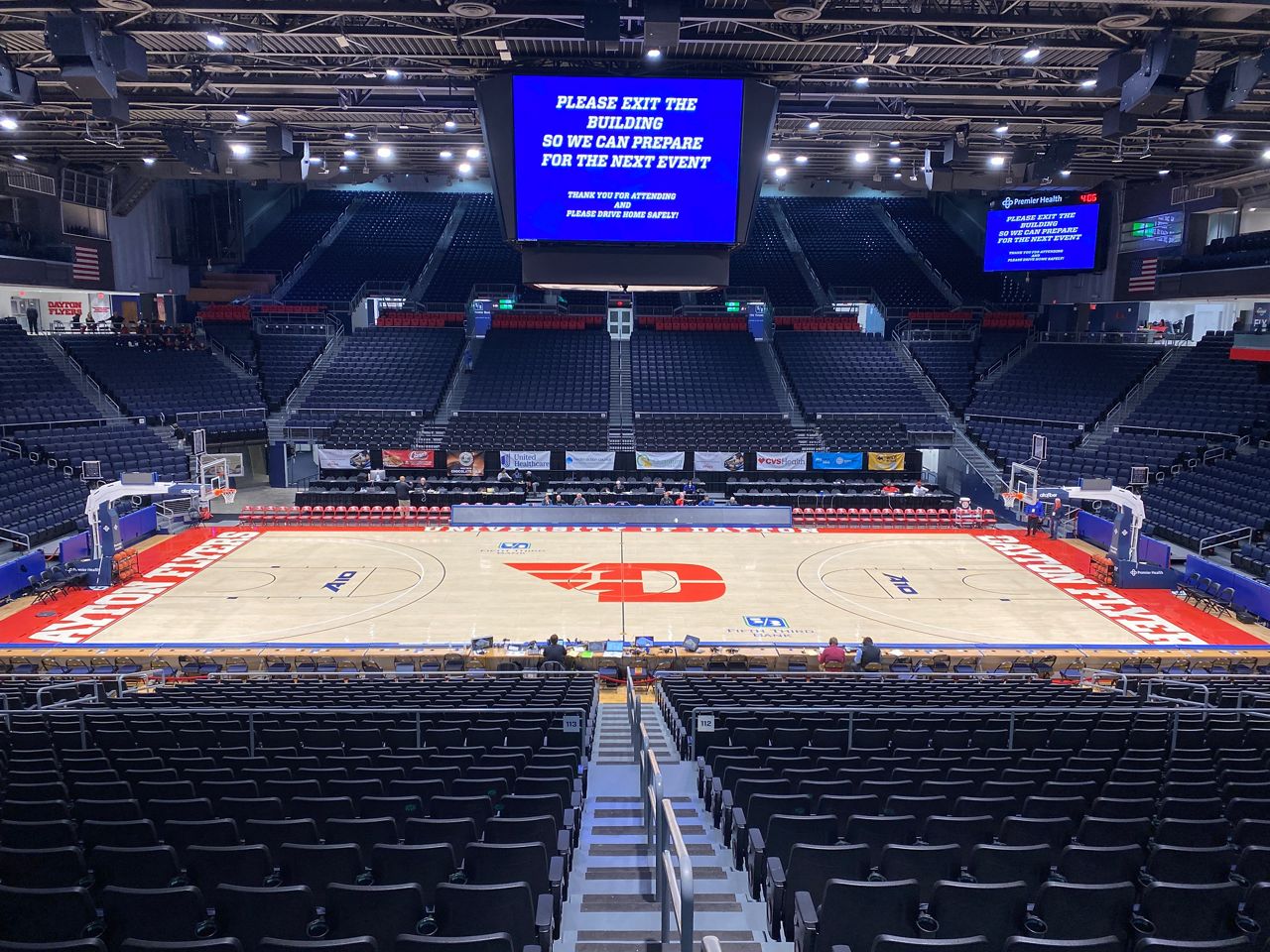 The University of Dayton spent $76 million to renovate its arena in large part to accommodate requests from the NCAA. (Spectrum News 1/Casey Weldon)

“The event is always up for bid, but obviously every time that it has been up for bid previously it's been awarded to Dayton,” Haynor said. “I would imagine that Dayton will continue to bid on it, but it will go through the bid process.”

The previous NCAA contract with Dayton ran through 2022. But the NCAA agreed in October 2020 to extend the lease. Part of that was likely due to Dayton’s commitment to major renovations to UD Arena, Titlebaum said.

The University of Dayton completed a three-year, $76 million renovation to the facility in 2019. It was the largest construction project in university history.

“The NCAA said these are the things that we're expecting from our host city and Dayton made those changes,” Titlebaum said.

The new-look UD Arena now has more general and premium seating. Capacity is now up to 13,407. They also added other amenities such as expanded food offerings and a bigger team shop.

They also updated the four locker rooms at the arena for the first time since the building opened in 1969.

“I truly believe if all things are equal, the NCAA doesn't want to take the event away from Dayton. But Dayton has to always step up – make necessary changes and always keep their facility updated,” Titlebaum said.