COLUMBUS, Ohio — Ohioans who have had at least one dose of the COVID-19 vaccine have until 11:59 p.m. Sunday to enter the second Vax-a-Million drawing.

If you're 18 and older, you can win one of the five $1 million prizes. Those between the ages of 12 to 17 can win one of five four-year, full-ride scholarships, including room and board, tuition, and books, to any Ohio state college or university.

Bugenske, originally from Shaker Heights near the Cleveland area but who now lives near Cincinnati, won the state's first $1 million prize. Costello won the college scholarship.

🎉 Congratulations to Abbigail and Joseph! 🎉

The next #OhioVaxAMillion drawing will take place one week from today. Vaccinated Ohioans who haven't yet entered to win can sign up at https://t.co/Svppf9uA8O pic.twitter.com/HjLnszY2ls

Four more $1 million and college scholarship winners will be announced each Wednesday for the next four weeks.

The second drawing will be held on June 2. 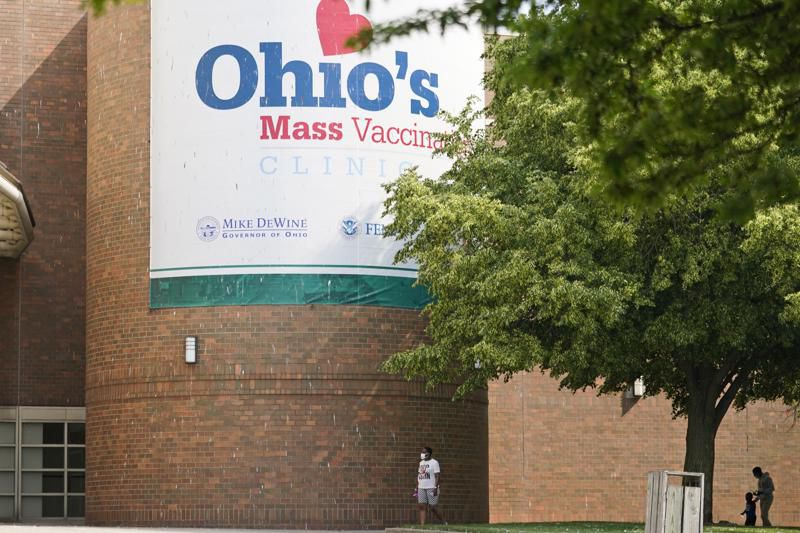 People walk past sign displayed for Ohio's COVID-19 mass vaccination clinic at Cleveland State University, Tuesday, May 25, 2021, in Cleveland. Nearly 2.8 million residents have registered for Ohio's Vax-a-Million vaccination incentive program, with participants hoping to win either the $1 million prize for adults or a full-ride college scholarship for children, Gov. Mike DeWine announced Monday, May 24. The winners will be announced Wednesday night at the end of the Ohio Lottery's Cash Explosion TV show, and then each Wednesday for the next four weeks. (AP Photo/Tony Dejak)

Ohio continues to report an increase in vaccination rates among Ohioans as the deadline for the second Vax-a-Million lottery drawing approaches, according to the Ohio Department of Health.

Vaccination numbers increased during both weeks following the May 12 lottery announcement when compared with the week prior to the announcement, according to Ohio Department of Health.

“Ohio’s Vax-a-Million drawing was designed to bring attention and excitement to vaccination efforts around the state. This data showing significant increases in vaccination numbers during the two weeks since the contest was announced demonstrates it is working,” Ohio Department of Health Director Stephanie McCloud said in a press release. “Vaccines are our best tool to return to the lives we remember from before the pandemic.”

"This is a program that we announced a few weeks ago as we were seeing our cases, frankly, go down . . . We couldn't figure out any way to get them moving back up, and came up with the idea of of doing this lottery and it's worked, it's worked exceedingly well. We've got a lot of enthusiasm out there, a lot of excitement," DeWine said on MSNBC Sunday.

DeWine said the Ohio Vax-a-Million program has been a success.

"We've seen about a 45% increase in vaccinations," DeWine said during the MSNBC interview.

"The rural areas of the state where candidly the uptake in the vaccination has been the lowest, that's where we've seen the most increase, and we've also seen, interestingly, you know, we're offering not just a million dollars to adults, but for young people, they have the chance to win a four-year full scholarship, full ride, room, board, tuition, etc. to an Ohio state university, and so among 16 and 17 year olds, we've really seen a dramatic increase in vaccinations. In fact, it's gone up 94%."

More than 2.7 million adults signed up for the $1 million prize and more than 104,000 children ages 12 to 17 entered the drawing for the college scholarship, which includes tuition, room and board, and books.

"I can't tell you how happy I am about it and it's been a marked change, a noticeable change," DeWine said.​

Participants must register to enter by phone or via the Vax-a-Million website. Teens can register themselves, but parents or legal guardians must verify their eligibility. The names of entrants who don’t win will be carried over week to week.

"Well, some people have said, you know, it's a waste of money, and my answer to that is, what's a real waste, what's a tragic waste, is to lose someone today to COVID because we now have the vaccine, and the vaccine works exceedingly well, so that's the real tragedy," DeWine said on MSNBC on Sunday.

The concept seemed to work, at least initially. The number of people in Ohio age 16 and older who received their initial COVID-19 vaccine jumped 33% in the week after the state announced its million-dollar incentive lottery, according to an analysis by the Associated Press.

But the same review also found that vaccination rates are still well below figures from earlier in April and March.

Participants can enter the $1 million drawing or sign up for a chance to win the scholarships at www.ohiovaxamillion.com or by calling the ODH help line at 1-833-4-ASK-ODH.