A receptionist at a Black-owned hair salon partnered with the county health department to register minorities for vaccines. (Pete Grieve / Spectrum News 1)

SPRINGFIELD, Ohio — An Ohio county that was struggling to vaccinate minority residents found an unlikely solution in a partnership with a hair salon.

When the phone rings — and someone needs an appointment — Deborah Woods, 72, the receptionist at a Black-owned hair salon in Springfield, Ohio, asks if they’re calling for a haircut, or a COVID-19 vaccine.

An official partner of the Clark County Combined Health District in its effort to vaccinate more minority residents, Woods was trained to be able to register callers for appointments directly in the backend of the health department’s system, she explained.

Since January, Woods has registered about 260 people for appointments, mostly Black residents.

The salon is well-known in the community, said Woods, who has worked as the receptionist for more than 15 years at the shop, Young Hair Inc., and is also the president of the National Council of Negro Women in Springfield, Ohio.

Joseph Parks, 67, who was getting his second shot at the health department’s clinic earlier this month, said his wife heard through a connection that they could call the salon to make an appointment, and it worked. Registering online would have been a lot harder, Parks said. 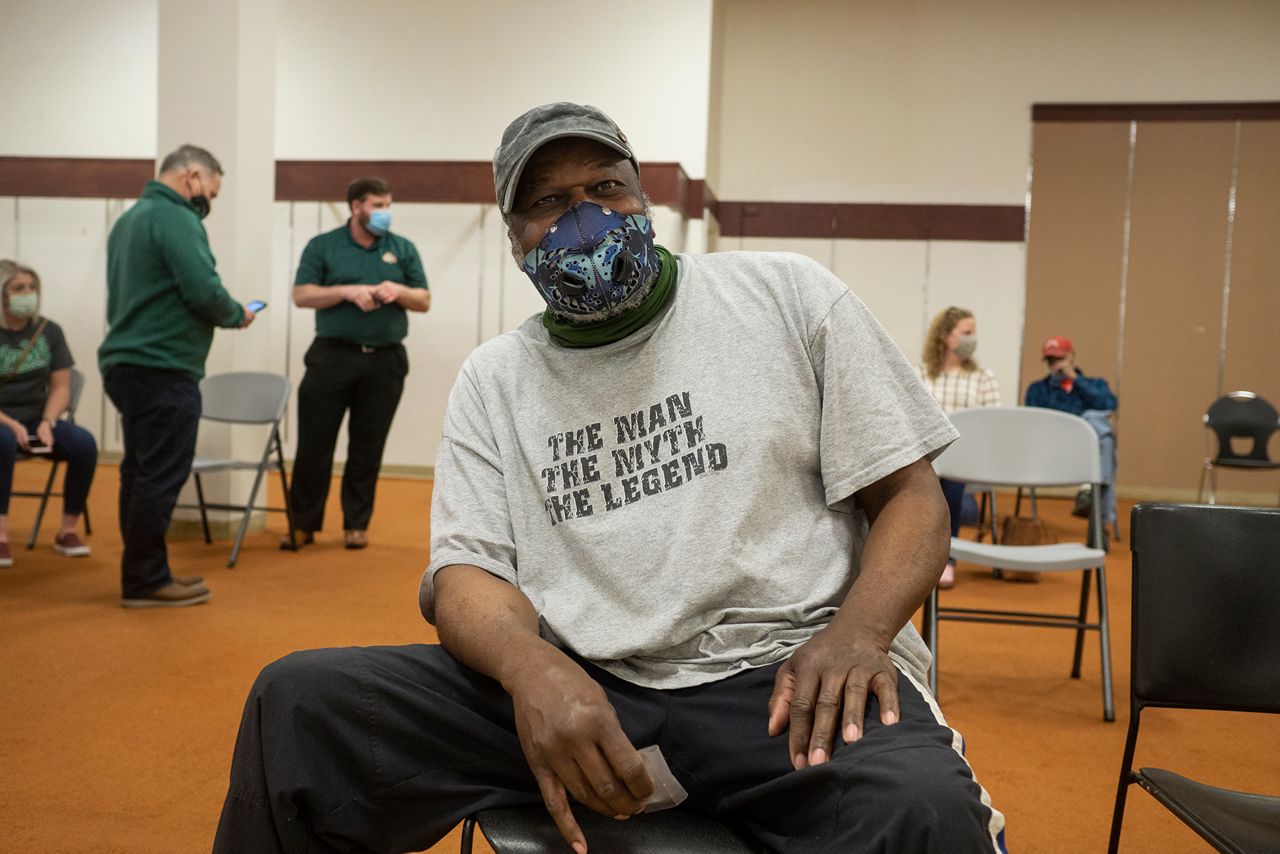 Clark County resident Joseph Parks waits for 15 minutes after he was vaccinated at a clinic in a shuttered JC Penny building. (Pete Grieve / Spectrum News 1)

Now he’s trying to convince other Black people to get the shot. “There's skepticism because of the previous experiments that went on. People are nervous about how they've been treated through time,” he said. “But we don't have too much of an option. People are dying because they don't have the vaccine.”

When Woods, her sister and boss Patty Young, and their coworkers went to the county’s vaccination site to get their own shots in January, they asked the health department staff if many minorities were coming for appointments. The numbers were not as high as the department wanted, Woods said. After their discussion, Director of Nursing Christina Conover got the idea that Young, who is president of Sisters United for Prevention, which raises cancer awareness in the Black community, might be able to help with registering minorities.

Young said she volunteered Woods, because she is already at the desk taking appointments for haircuts.

“They were way behind, and my sister said that I could schedule everybody because I'm the receptionist and I'm at the desk, so she volunteered me,” said Woods.

Initially, she was scheduling people who came into the shop for haircuts if they were eligible for the vaccine.

Then, it took off by word of mouth and social media posts, and the phones started ringing.

Woods takes down her callers’ information, asks a few health questions, and checks their eligibility. For anyone who isn’t eligible, she can put them on a no-waste list, which has allowed some younger minority residents to get the shot.

At first, Woods was only able to register minorities, she said, but now that vaccines are more available in Clark County, she can register callers of any race. She has since registered a few white people, but most of the callers are Black residents, as it’s spread through their personal networks, she said.

The health department said it deeply appreciates its relationship with Woods.

“Her efforts to schedule people have greatly helped the health department reach a wider range of individuals who are in need of help,” a department spokesperson said.

Word spread at the Navistar truck manufacturing plant in Springfield that Woods was the woman to call for vaccines. At that time, she said she began getting calls from people who thought they were speaking with the health department.

“It spread all in Navistar to call Debbie, and they get kind of confused when they call the shop, because I answer ‘Young Hair Incorporated,’” Woods said.

It may be unconventional, but everyone is thankful when they get an appointment, especially if they’ve had frustrating experiences in the past unsuccessfully trying to register.

In one instance, Woods scheduled a church group, and eight people came in a van from Columbus to get their vaccines. Afterwards, they sent her flowers to show gratitude.

Because COVID-19 disproportionately impacted Black residents in Ohio, many of Woods’ callers have experienced loss in their family, which motivated them to get the vaccine, she said.

“They tell me different stories of what's going on in their families. Sometimes someone will call and want to get scheduled, and I'm on the phone a half hour with them because they just want to talk about what they've been through,” she said.

Taking phone calls from the salon, Woods has made a significant impact on the county’s minority vaccination numbers, Young said.

“She's been patient enough to deal with people through all the procedures of getting them scheduled, so she's been really a blessing to the minority community. They need someone with her patience,” she said. 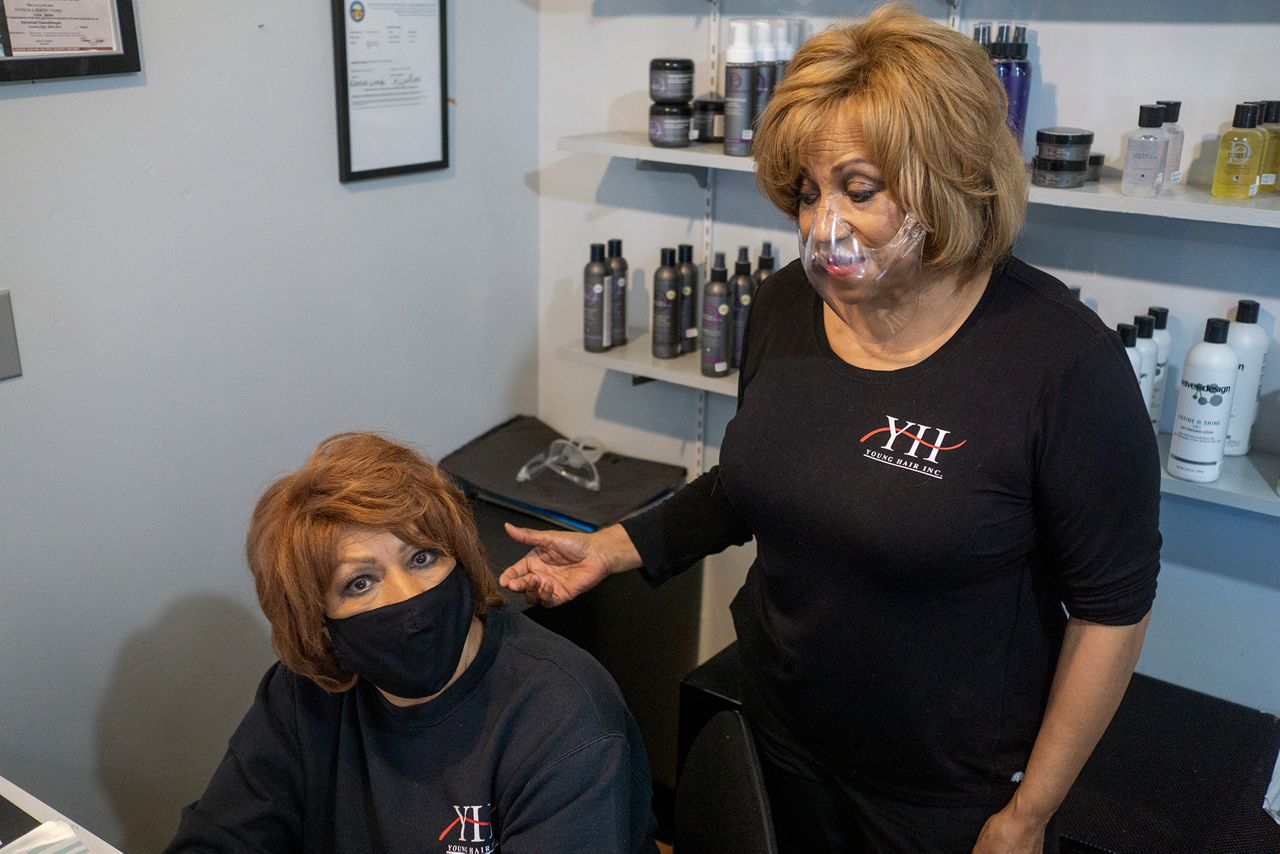 By the time someone calls Woods, they are usually interested in the benefits of getting the shot, but they may still be uneasy. “A lot of times when they call, I have to really talk it up,” Woods said.

She has heard every concern you can imagine, always responding with information about the safety profile of the shots and explaining that any side effects typically fade quickly.

“A lot of Blacks didn't trust getting the COVID-19 vaccine. Because of a history of vaccines — Tuskegee, and other things — they just didn't trust it, so once they know that a minority or a Black person is pushing this vaccine, it makes them feel a little bit more comfortable getting the vaccine,” Woods said.

Having been in business for 50 years, Young said people “feel at ease” getting signed up for the shot through a hair salon they trust.

“Debbie can let them know there's not one vaccine for them and another for you. It's all the same. We’re all getting the same thing,” she said. “That's comforting, and even some of the questions that come up, I don't think they would feel free to ask a person that wasn’t of color.”

As Ohio is set to expand vaccine eligibility for the last time on Monday, Woods said she isn’t done yet.

“I'm going to ride it out,” she said. “As long as they're giving the vaccines, I'll be scheduling them.”