Cincinnati Children’s Aims to Give Extra Dose of Love

CINCINNATI — When you’re a kid, Valentine’s Day might mean decorating a cardboard mailbox with pink and red construction-paper hearts for your classmates, or your secret crush, to pop a “Will you be my Valentine?f” card into at school. But for those lying in a hospital bed, that holiday tradition is just one of the many things they have to miss.

Cincinnati Children’s Hospital Medical Center doesn’t think that being sick should stop the love. Instead, they want to expand it beyond the classroom and go global.

"We just want to make sure that we shower them with extra love this year, extra appreciation, and making sure that those kids all get a card, and we are able to raise money for a great cause,” said Danielle Discepoli, the donor relations officer for Cincinnati Children’s, who focuses on corporate donations and spearheads the annual Valentine’s Day e-card campaign, which raises funding for key programs, like the expansion of mental health services, while also raising the spirits of the children in their care.

Cincinnati Children’s kicked off its annual Valentine’s Day e-card campaign recently and continues through Feb. 14, in which anyone from around the world can send a card to a child at Children’s, all in an effort to raise money and spirits on the holiday dubbed for love.

"I think everybody needs a little extra love in their life right now. And that's kind of what we're promoting this year,” Discepoli said.

While the medical center has always been diligent about the potential spread of infection when doing holiday card campaigns like this one. However, she said this year has been more important than ever because of the pandemic.

“It is nice that we already had that in place because of all the COVID restrictions and we didn't have to do anything totally different this year. We've always been very concerned about infection control, and making sure that these cards are given to the kids in a safe manner.”

The annual campaign all started because people in the community wanted to do something special for ailing children on Valentine’s Day.

“We have a lot of folks that reach out wanting to send Valentine's Day cards or gifts or something like that around holiday. And unfortunately, we can't accept a lot of that stuff because of the infection control situation. So, we wanted to ensure that the community and these kids could still participate in Valentine's Day, but do it in a safe way,” Discepoli said.

“Last year was 2020, the year of everything going a little haywire. But Valentine's Day was before everything really shut down last year,” she said. “So 2021 is kind of the year that is definitely unique. I think people are feeling extra isolated this year. You know, a lot of kids aren't in school, but a particularly these kids are not able to see their friends and family (too).”

The Cincinnati Children’s Valentine’s Day initiative has generated hundreds of thousands of cards for patients over its seven-year run.

This year alone, Discepoli said, they have already received $5,000 in donations and 5,000 e-cards from nearly 20 countries and 42 states.

Once they are submitted online as an e-card, Discepoli said, their partner, RPI donates their services to print and ship all of the cards over to Cincinnati Children’s. Each card includes the sender’s first name and the back of each card includes a game for the child.

For the kids at Cincinnati Children’s, the simple, but kind gesture means everything.

“I think that they are just blown away that someone in the community, and even maybe that person was from across the world, was thinking about them a Valentine's Day,” Discepoli said.

After the cards are printed, the medical center staff distributes them in hefty stacks to all of the patients.

“I think the kids' reactions are amazing. They're certainly excited about the cards, but I think, honestly, sometimes what's more touching for me, is the parents’ reactions,” Discepoli said. “The shock and awe of them hearing about how many cards people submit, how much money we're able to raise — and it's all just because people are thinking about their kids in the hospital during the holiday that they all wish that they could be with their classmates and with their families.”

“Valentine's Day is that is the time to send love and think about those people in your life. So, I think that the parents, honestly, they get it a little bit more than some of these kids do. And their reaction is really just priceless to know that somebody was thinking about their child,” she continued. 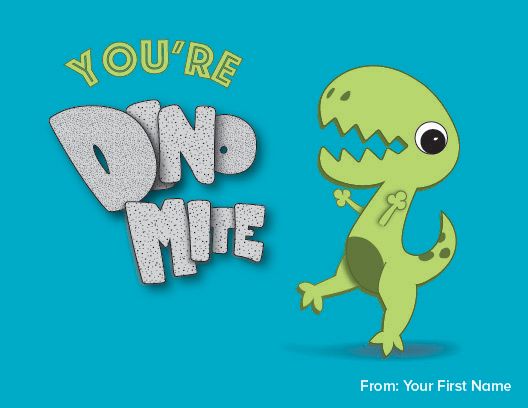 This year marks the second year that Cincinnati Children’s has partnered with the local design firm, Kolar, for the Valentine’s Day e-card campaign, Discepoli said.

But this year was a little different.

Kolar reached out to its talented pool of artists in an effort to bring new life and inspiration to the e-cards. They received several submissions from nearly a dozen local, national and international artists, who wanted to help create new Valentine’s Day designs for the e-cards.

One of those artists was Cincinnati-based Pam Kravetz. 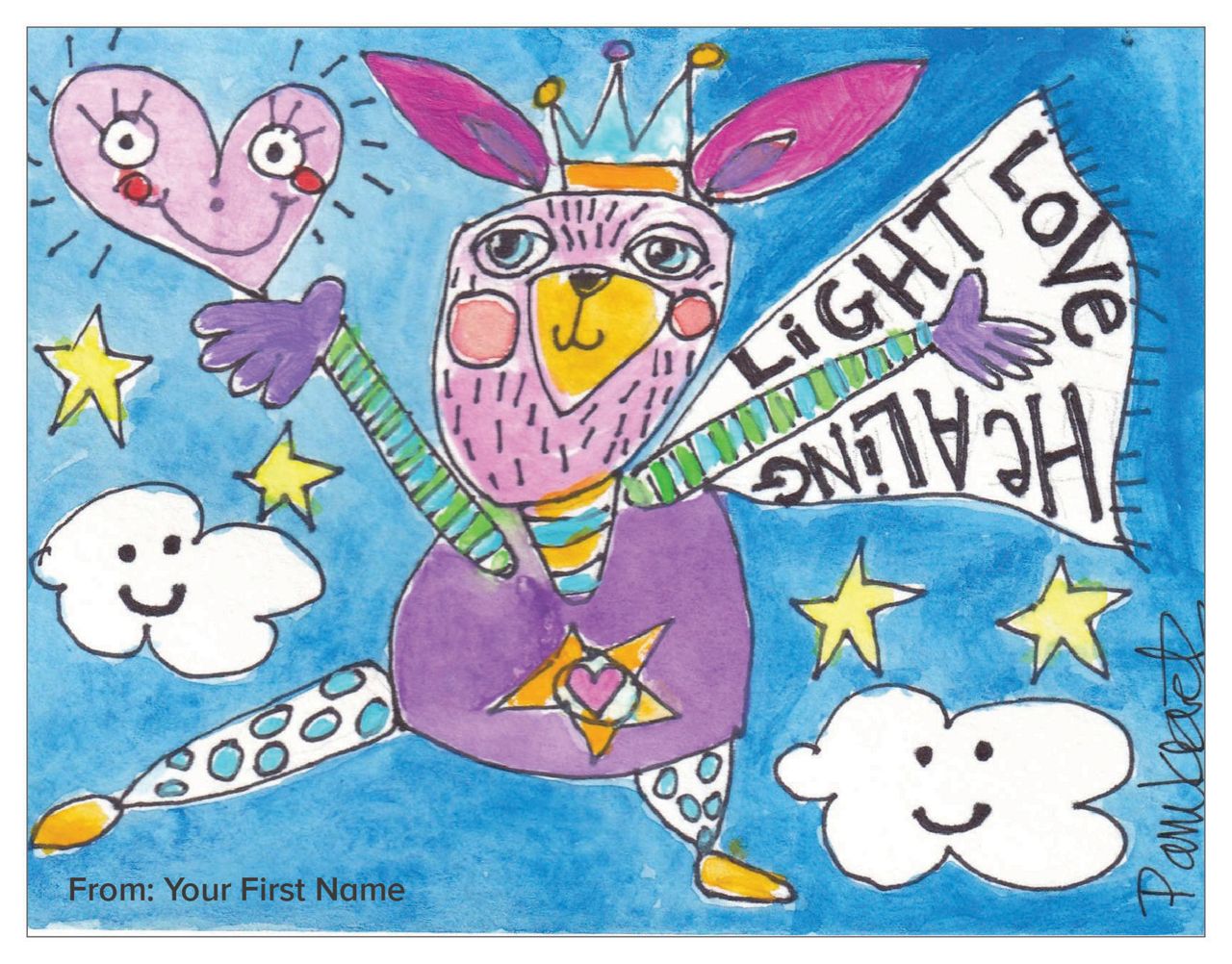 Her artwork, “Light, Love, Healing,” is one of several designs people can choose from when sending e-cards to patients in Cincinnati Children’s.

Kravetz, a regionally and nationally recognized visual artist with more than 50 art exhibits and installations, said she is inspired by "the beauty in the chaos of the everyday.”

Named locally as CityBeat’s “Best Artist,” her artwork has been prominently featured in ArtWorks installations at Cincinnati Children’s and in Memory Quilts in the lobby of the Contemporary Arts Center.

In addition to bringing artists and their work to the campaign, in honor of Valentine’s Day, Kolar has also vowed to match all gifts to the campaign, up to $20,000, during the e-card initiative — funding key programs at Cincinnati Children’s, like its expanding mental health services.

Donors may designate a project or program throughout the medical center for their donation to go towards, including Cincinnati Children's expanding mental health program, specifically at its College Hill campus.

“We’re growing our mental health programs here at Cincinnati Children's and becoming one of the leaders in that realm within the country,” Discepoli said.

That’s because, according to Cincinnati Children’s, adolescent mental health is in crisis, with unprecedented levels in depression, anxiety, mood disorders and post-traumatic stress — and it's only growing in Cincinnati, as well as across the country.

According to Cincinnati Children’s, if untreated and unaddressed, mental health issues can lead to suicide, the second-leading cause of death in Ohio for those ages 10-34. Furthermore, the medical center stated that one adolescent or child dies by suicide every 33 hours in Ohio, which is a 56% spike over the last decade.

While Cincinnati Children’s has 130 beds specifically for mental health patients, their hope is to aide more children and their families with expanded programs and services that would be housed in a newly renovated, five-story impatient facility at its College Hill campus.

Whether it’s through a donation or a Valentine’s Day e-card, this is the time when the patients at Cincinnati Children’s need a little extra dose of love, Discepoli said.

If you would like to send an e-card this Valentine’s Day, now through Feb. 14, to a child at Cincinnati Children’s, visit their website.

If you are interested in donating for the mental health program or any other project at Cincinnati Children’s, in honor of Valentine’s Day that Kolar will match, visit here.