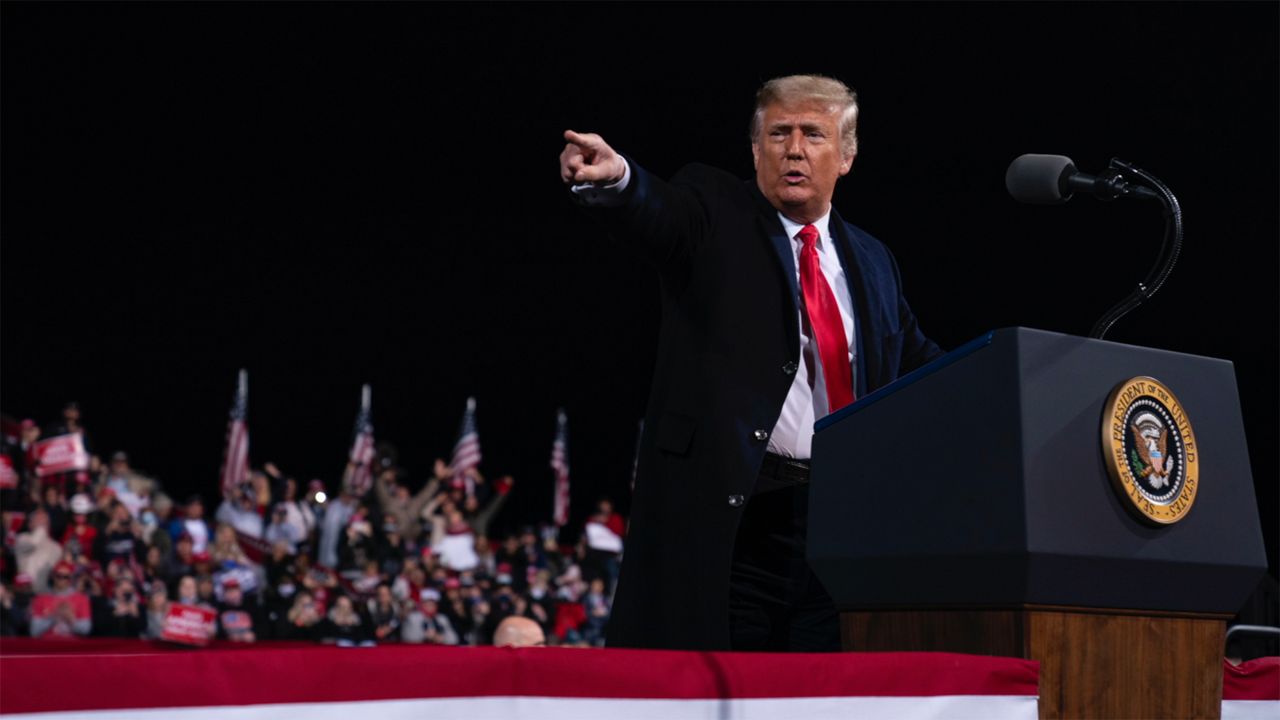 WASHINGTON, D.C. — President Donald Trump has spent the last month falsely claiming he won the election, despite all 50 states having now certified their results and Joe Biden leading in both Electoral College and popular votes by large margins.

Bipartisan election officials across the country, and even some federal judges appointed by Trump, have said and ruled repeatedly that there is no evidence of widespread fraud in the race.

Still, a majority of Ohio’s 13 Republicans in Congress are refusing to acknowledge that Biden won and Trump lost.

A tally by Spectrum News found that only two of the 13, Representatives Anthony Gonzalez and Steve Stivers, have referred to Biden as president-elect, after saying Trump initially had a right to challenge some results.

“If you just look at the status of the existing objections and where states are in their count and their recount and those sorts of things, it certainly appears that Joe Biden is going to be the president,” Gonzalez (R, 16th Congressional District) said in a Zoom interview on Nov. 18.

“I saw certifications in places like Wisconsin, Nevada, Georgia,” Stivers (R, 15th Congressional District) said in a Skype interview on Dec. 8. “It became clear that that due process had run out and that the Electoral College was going to elect Joe Biden as president-elect.”

Only one other Ohio Republican has gotten close to admitting Trump lost.

Sen. Rob Portman (R-Ohio) wrote in a Cincinnati Enquirer op-ed on Nov. 23 that “there is no evidence as of now of any widespread fraud or irregularities that would change the result in any state”…and that Biden has “enough electoral votes to win.”

But he didn’t call Biden president-elect, something he did call Trump right after Election Day in 2016.

(Update: On Friday evening, the Supreme Court rejected the lawsuit.)

Back in 2016, four of them publicly referred to Trump as president-elect right after he was projected the winner, but they insist this time is different, despite the lack of evidence of widespread fraud.

“There is the question, this time, of the integrity and legitimacy of the election with the allegations of voting irregularities and voter fraud. And it’s important that we get to the bottom of those,” Rep. Johnson said in a Zoom interview on Nov. 20.

And though the Trump campaign’s legal efforts to prove fraud keep failing, most Ohio Republicans say the president can keep trying.

“This president, the current president, has every right to exhaust his legal remedies, which he’s doing at this point,” Rep. Steve Chabot (R, 1st Congressional District) said in an interview on Capitol Hill on Dec. 10.

“I don’t think that the election’s over,” Rep. Warren Davidson (R, 8th Congressional District) said in an interview on Capitol Hill on Dec. 9. “I don’t think anyone, whether it’s Joe Biden or Donald Trump, should concede the election until every legal vote is counted.”

Some Ohio Republicans, like Representatives Troy Balderson (OH-12) and Mike Turner (OH-10), haven’t responded to requests for comment or said anything publicly about the election. While others, like Rep. Dave Joyce (OH-14), have put out vague statements saying the vote-counting process should be transparent.

Ohio Democrats are united in recognizing Biden as president-elect, as well as condemning Trump and their Republican colleagues for not following suit.

“Everybody expected this to happen if the president lost, but to watch it in real time is really disturbing,” Rep. Tim Ryan (D, 13th Congressional District) said in a Skype interview on Dec. 4.

“What bothers me is so many Republican House and Senate members, they somehow walk around the halls of Congress upright without a spine,” Sen. Sherrod Brown (D-Ohio) said in a Webex interview on Dec. 10. “It’s a miraculous kind of thing they can do. And I think history will look back and say how could they have done this?”

"Don’t think of your party first, think of the country,” Rep. Marcy Kaptur (D, 9th Congressional District) said in an interview on Capitol Hill on Nov. 17. “This is a delicate moment in American history where we turnover the reigns of government at the national level from one political party to another.”