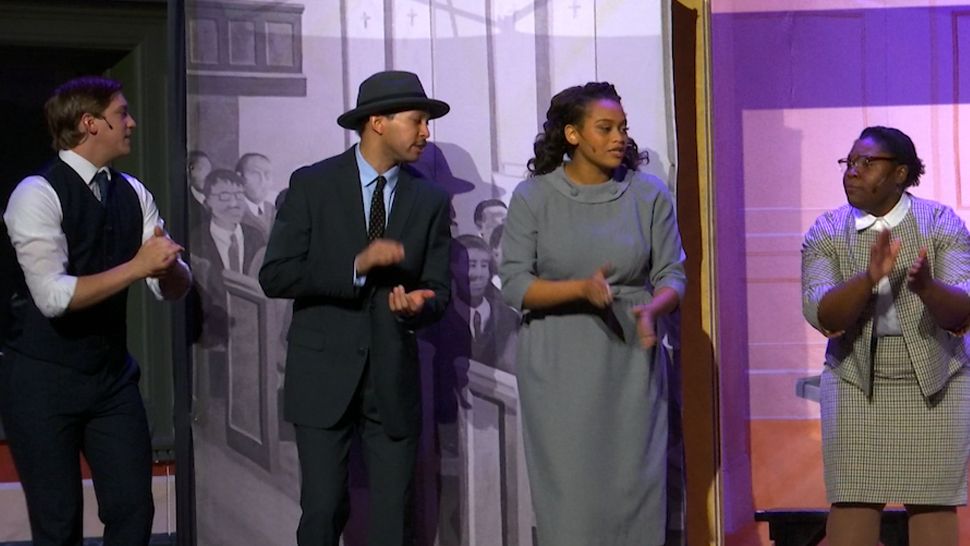 CINCINNATI, Ohio — The Children’s Theatre of Cincinnati is using the power of the stage as a way to inform youth about the life and legacy of Coretta Scott King.

Whitney Daniels plays Coretta in the traveling play Coretta Scott King: The Fight for Freedom. She said she’s honored to portray such an important historical figure.

“It’s really wonderful to do this play during Black History Month,” Daniels said. “There’s so much information, but it really teaches you about how far we’ve come, but also how far we have to go.”

There are only four actors in the cast of this play, which makes it a bit of a challenge. James Stringer Jr. plays Dr. Martin Luther King Jr. He said he’s proud of the show because they’re highlighting an important part of history that not many people, especially children, know.

“It’s kind of fun being able to tell a story where you’re showing the history of not just MLK, who most people know, but his wife’s side, which not many people know,” Stringer Jr. said.

One part of her story that’s highlighted in the performance includes her ties to Ohio. Coretta graduated from Antioch College in Yellow Springs, where she became involved with the campus NAACP.

The play has toured Southwest Ohio all though Black History Month, and is set to perform one more public show on March 26 at the Harrison Public Library in Harrison Ohio.

It's free and open to the public.

Director Deondra Kamau Means said while what they’re doing is teaching the youth about Black History, it’s important to note that lessons in Black History shouldn’t be contained to just one month.

“We are celebrating this show for Black History Month, but Black History is every month,” Means said. “It’s all 12 months of the year. Black history is American history, it’s world history.”

He says recognizing the importance of African American history is essential for the ongoing fight for equality.

Overall, the cast is proud of their play and hope people will come to see their last show in March.

“People should come and see this play because, although it happened in the past, there’s still so many similar issues today that are still going on,” Daniels said. “And I think watching this play will help you to realize there’s still so much work to do and if we could just take a little bit of Martin’s dream and apply it to now, I think we could keep pushing forward to make it better.”