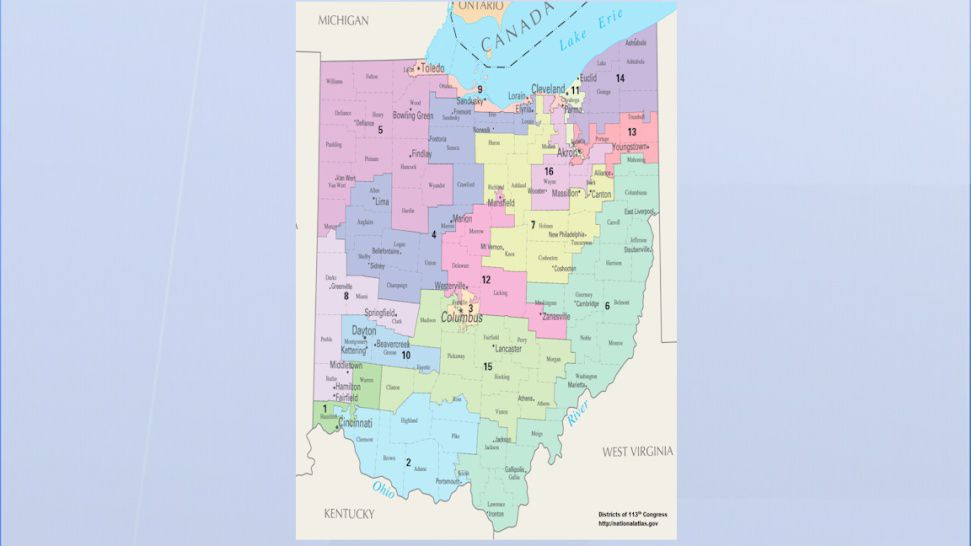 CINCINNATI, Ohio – A federal lawsuit in Cincinnati is in its second week before a panel of three judges.

The ACLU, League of Women Voters of Ohio, several individuals, and other organizations, filed the lawsuit in 2018 against several Ohio's Governor, Secretary of State, Senate President, and Speaker of the House.

The lawsuit says the current map is gerrymandered and violates voters' First and Fourteenth Amendment rights, including the U.S. Constitution's Electoral Clause. They are seeking for the map to be thrown out and redrawn before the 2020 elections.

Jen Miller is the executive director of the League of Women Voters of Ohio and says all voters are hurt by the current map.

“This map couldn't be created on accident,” Miller said. “As partisan as it is, as weirdly shaped as it is, had to be done with the intent of ensuring that throughout this decade Republicans would have a 12-4 advantage regardless of how many [voters] showed up to the polls and what their preferences were.”

In the four elections since the map was enacted, neither of Ohio's 12 Congressional Districts have flipped parties. The map went into effect in 2012 following the 2010 census. Current Ohio rules call for the majority party to draw up the map.

Ohio voters approved new rules to map making with a Constitutional Amendment in 2018. The new rules will largely require strong input from both parties, regardless of who is in power. It will also dictate how much a county can be split up into districts. Some counties in large metropolitan areas can include as many as four districts.

Ohio's 6th Congressional District stretches from just south of Youngstown to the most southern tip of Ohio. It's nearly 200 miles long.

Nancy Miller, a political science professor at the University of Dayton, says the current lawsuit is similar to two cases the U.S. Supreme Court is about to hear. Those cases are from North Carolina and Maryland and have similar complaints to the Ohio lawsuit.

“The partisan gerrymandering cases that the Supreme Court of the United States will be considering this session will have some impact on the case here in Ohio,” Nancy Miller said. “The key here is the cases that are before the Supreme Court are basically making the same complaints that the Ohio case makes that the partisan gerrymandered maps are a violation of the First Amendment, Fourteenth Amendment, and the Election Clause of the constitution.”

The Ohio lawsuit is expected to wrap up this week but when a decision by the judges is rendered is unknown. SCOTUS isn't likely to make a ruling until June.

Ohio isn't the only state with gerrymandering lawsuits. A series of lawsuits have started popping up all over the country, but most are unsuccessful.

“The only successful case to date that has actually led to an actual redistricting of lines based on a partisan gerrymander happened in Pennsylvania a few years ago,” Nancy Miller said. “The League of Women Voters and several Democratic citizens were able to successfully challenge that partisan gerrymandering violates the State's constitution and the state Supreme Court forced the drawing of a new map.”

SCOTUS has been reluctant to undertake gerrymandering cases in the past. Previous cases SCOTUS heard were sent back to the lower courts. It's unclear if the most recent cases from North Carolina and Maryland will produce different results. Deepening on a decision by SCOTUS could make the Ohio lawsuit moot.

Despite the partisan politics involved in gerrymandering cases, Jen Miller said even if Ohio Democrats gerrymandered districts they would likely still file a lawsuit.

“Absolutely. So what we know to be true is that parties, when they control the map-making contest, whether they're Republicans or whether they're Democrats or have an interest, in cementing in that partisan advantage for a decade. And in fact, in these cases that are popping up around country – sometimes it's Republicans and sometimes it's Democrats. The problem is that gerrymandering, in the end, hurts every voter.”

Attorneys representing Republicans being sued did not respond to emails for comment.