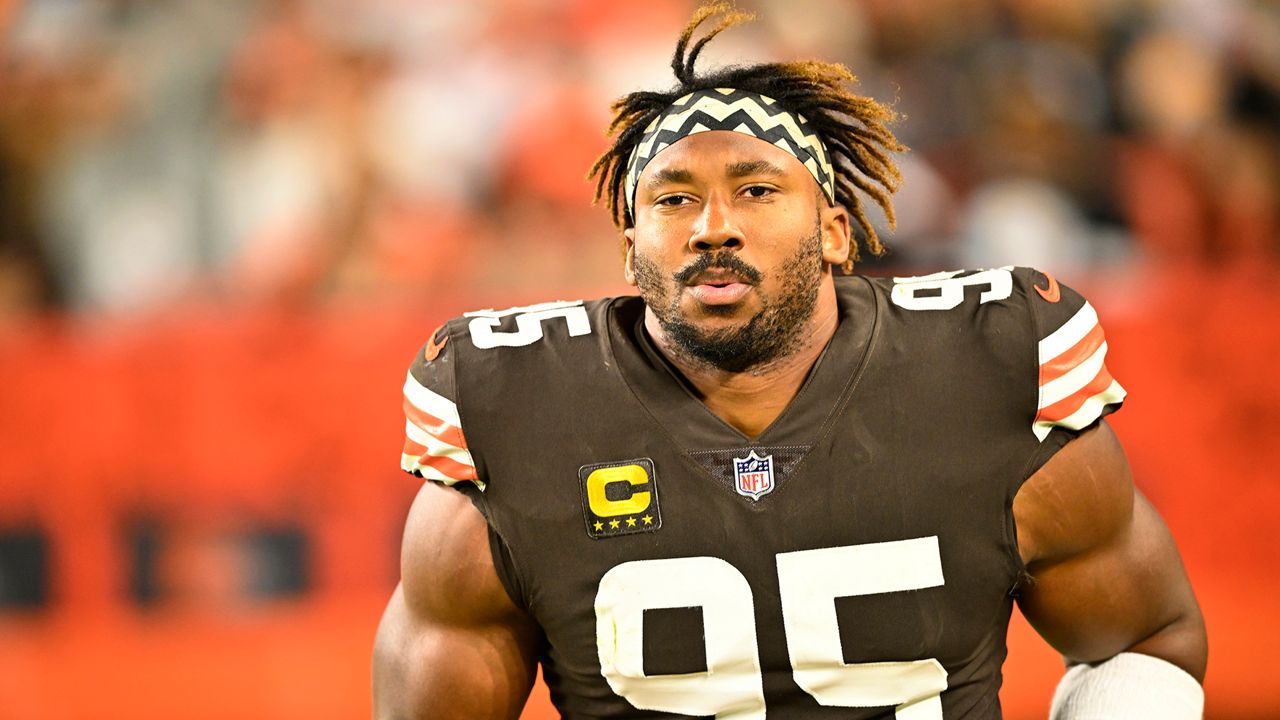 BEREA, Ohio (AP) — Myles Garrett knows he’s lucky. His life could be very different or even over.

​Speaking for the first time since losing control and flipping his Porsche after practice on Monday, the Browns’ star defensive end expressed relief that he survived the crash he caused by driving too fast.

Garrett sustained a sprained shoulder, strained biceps and cuts and ruptured a blood vessel in his left eye during the single-car wreck on a rural road near his home following practice.

He promised the mishap will change his behavior.

“This will be definitely a wake-up call for me, just try to be smart overall with driving,” Garrett said in the locker room after the Browns practiced. “Don’t take anything for granted. Be grateful that I’m still able to be here and just take my time.”

Despite his injuries, and not practicing for three days, the Browns are listing Garrett as questionable for Sunday’s road game against Atlanta. Coach Kevin Stefanski said Garrett’s playing status will be decided based on a medical evaluation.

Garrett said he’s feeling much better, and he didn’t rule out the possibility he’ll face the Falcons.

“That’s up to the training staff and the coaches,” he said. “If it were up to me, I would love to go. That’s just my competitive spirit and my nature. Physically we have to assess that going up to the game, today, tomorrow and on Sunday.

The Ohio State Highway Patrol said the 26-year-old Garrett was traveling at an “unsafe speed” when he went off the road, veered into a ditch and hit a fire hydrant before rolling his car several times.

A 23-year-old female passenger with Garrett also suffered minor injuries, was treated at a hospital and released.

“That was a big sigh of relief for me because I was the one who put us in danger,” Garrett said. “So it was very calming for me to know that they were OK.”

Garrett told officers he thought was going 65 mph in a 45 mph zone before going off the hilly road near his home. Drugs and alcohol are not suspected, the highway patrol said in its post-crash report.

The accident destroyed Garrett’s car and left him along with many of his teammates shaken.

“I think emotionally I’m pretty grounded with everything. I’ve put it behind me,” Garrett said. “Physically, I’m still dealing with some of the injuries that came along with it, but it’s really just a blur. It all happened pretty fast.

“Sometimes, the last couple nights I’ve sat and thought about some of the different situations, scenarios, how it played out, but knowing that I can’t change the past, just got to keep moving forward and glad everyone’s all right.”

The No. 1 overall pick in the 2017 NFL draft has been ticketed numerous times for speeding. He was cited on successive days last year for going 120 mph and paying a fine for an amended 99 mph violation in a 70 mph zone.

Garrett said the crash will change the way he drives.

“I don’t think it takes something as drastic as this to tell me that I need to slow down,” he said. “It’s about listening to my love ones, hearing them out and understanding that it is serious every time you get into the car.”

Garrett needs one sack to become Cleveland’s career leader. He has 61 1/2 sacks in 71 games.

The Browns are also listing Jadeveon Clowney as questionable for Sunday. He missed last week’s game with a sprained ankle.​