Rains from Tropical Storm Fred in 2021 caused flash flooding along the Pigeon River in Haywood County, in western North Carolina. The floods killed six in Cruso and damaged homes and businesses in Canton. (Charles Duncan/Spectrum News 1)

For the most part, the Pigeon River flows quietly through Canton, a small town in the North Carolina mountains west of Asheville. But in August 2021, as Tropical Storm Fred moved over the region, heavy rains poured down the sloped and brought a flash flood down this normally calm river.

The water level rose to almost 20 feet on the Pigeon. Six people died in the Cruso community. Downstream in Canton, floodwaters damaged homes and businesses, along with the town hall, police department and fire station.

"It’s crazy that the mayor of a town roughly 3,000 feet above sea level has to check tropical forecasts," said Zeb Smathers, mayor of Canton. He spoke with Spectrum News 1 Friday morning as all eyes were on Hurricane Ian, expected to bring heavy rain and high winds to much of the state. 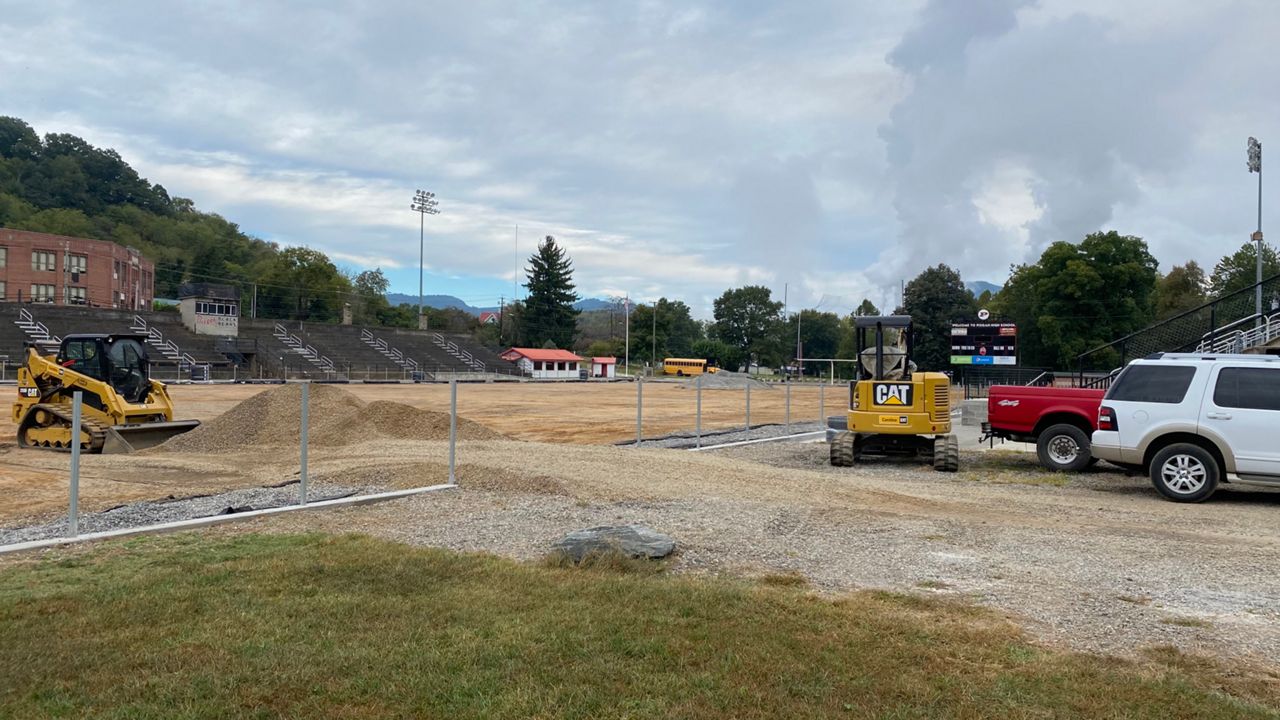 Luckily for Canton, Ian's track has shifted east and this part of western North Carolina looks like it will be spared the worst of the rains.
Work continues to repair the football field at the high school in Canton, which was destroyed by floods in August 2021. (Charles Duncan/Spectrum News 1)

When Tropical Storm Fred hit this region 13 months ago, Smathers said his town had about 90 minutes' warning that something bad could happen. But they weren't taking any chances when it looked like Ian might bring tropical conditions back to the mountains.

"I started reaching out to the business owners early in the week," Smathers said. "We’re able to work with these businesses to get their most important inventory out."

Business owners in downtown Canton, along the river in the shadow of the large paper mill, were watching the river warily before the storm.

"We don’t know where this storm is going. It weighs heavy on me that somewhere in this state right now there’s someone in a home, and they do not realize that come tomorrow, that home, that business is going to be flooded," Smathers said.

Smathers praised state leaders for their fast response, but criticized the federal government for being too slow.

"The state moved very quickly, Gov. Cooper moved quickly. We had a lot of help from Sen. (Thom) Tillis, but when it got to Washington it slowed down," he said. "It took way too long for us to get our FEMA declaration from the federal government."

When it comes to responding to a disaster in a community like Canton, local leaders know best, Smathers said.

"The people in these communities know what they need. These police officers, fire officers, rescue workers, small-town mayors, boards, town managers, they know exactly what they need," he said. "No one knows the lay of the land better than your local government on the ground."

They are still working to find a new home for the fire station, but the department has plans to be able to evacuate quickly if and when the river rises again.

"The facilities and personnel that people need to respond to storms, not just storms, but the day-to-day needs of a town, are no longer in a flood zone," the mayor said.

"That’s one of the great lasting legacies of Fred, especially working with money from the feds and state and locals that we know now where these important facilities are, they’re not going to be affected by the next storm," he said.

The town has been able to reopen its pool, which sits next to the river, and is rebuilding its park with an all-abilities playground.

"You can look at the destruction, or you can look at what a town has been able to do and say 'this is what we stand for,'" Smathers said. "Let that be our legacy."