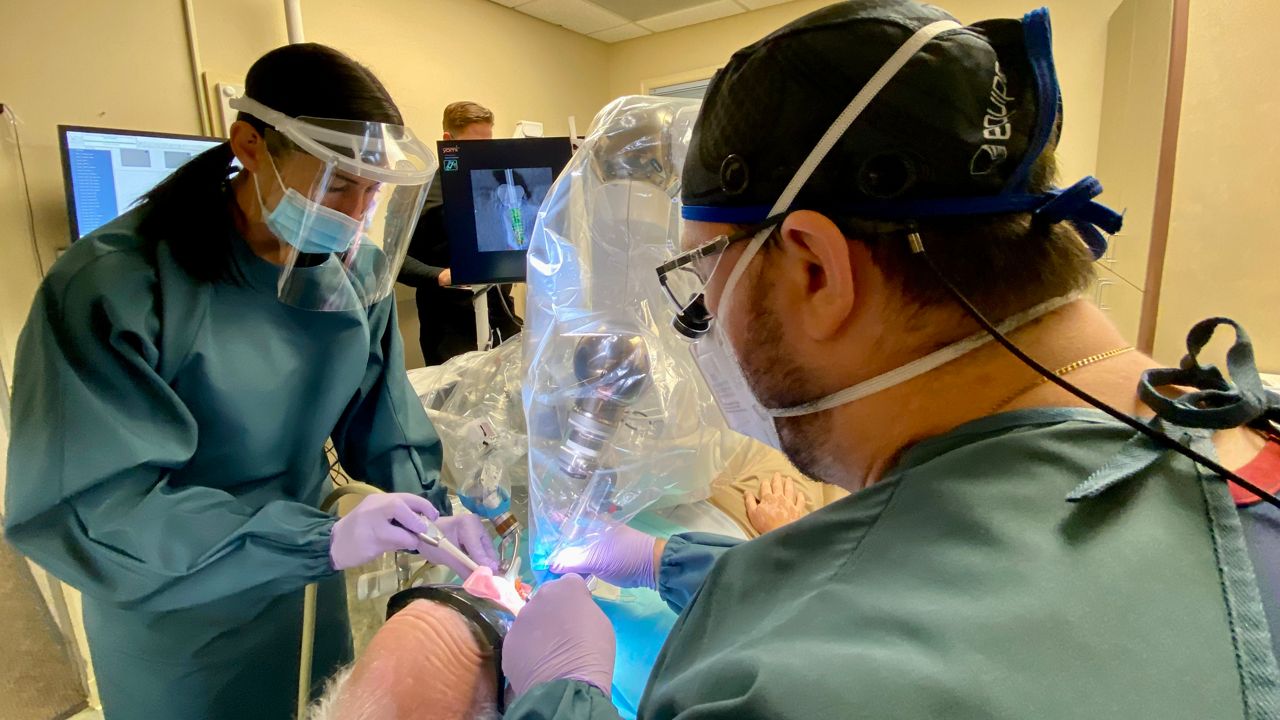 Dr. DeAngelo has used the robot for surgeries over the last two years.

CARY, N.C. — Robotically assisted dental work is available in North Carolina. The technology helps a dental team prepare for a procedure ahead of time.

The robot, called Yomi, is the first FDA approved dental system. A dental specialist said it has transformed his daily operations.


“This technology has pretty much allowed me to pretty much plan everything in advance,” Dr. Samuel DeAngelo said.

Dr. DeAngelo is a periodontist. He performs procedures on structures, like gums, supporting and surrounding the teeth.

“The day of surgery, I have very little stress because I know where it’s going to be, I know where the implant is going to go, and I know any challenges I have in advance,” DeAngelo said.

The robot is only a guide, and DeAngelo must still do the work.

Yomi employee and representative for the company, Chance Langley, was present the day of surgery. He watched images of the jawline in real time for the periodontal crew.

Communication was constant and tweaking can happen midway.

“Because everything is measured to precision. And if anything is off, it magnifies the error,” DeAngelo said.

The depth, cut and angle to drill the implant are nearly exact for each treatment.

Familiarity has bred comfort for the specialist after two years of using the robotically guided dental assistant.

Scans are taken beforehand and coupled with some from the same-day of the procedure.

“Let me see 29 when you can,” DeAngelo said to Langley during a procedure.

Numbers reference the location of certain teeth and where an implant is about to go.

“Just making sure I am safely away from sensitive anatomic structures,” DeAngelo said.

Langley kept track of their measurements on screen. On this occasion, their work was paused just to be careful.

Coordinates were off slightly due to human error. Small corrections are often made.

To ensure accuracy, Langley punched in the drill bit length.

The doctor said the innovation takes much of the guesswork out of the equation.

Five dental offices and specialists in North Carolina use the Yomi.

A former patient, April Curtis, had an operation with the robot last year.

#RoboticDentistry #NCHealth
Last week I watched a robot guide a periodontist during a dental implant procedure. April Curtis had work done on a bad tooth w/the help of Yomi (the robot). She talked about the post-surgery process.
Fun fact: she's a race car driver.@SpecNews1RDU pic.twitter.com/Va8UtUGfah

Curtis said the process is convenient, the healing time is short and the procedure lasts around one hour. The 70-year-old is someone who appreciates speed. She’s a driver in the BMW Club Car of America Series.

Curtis is also the vice president of the Tar Heel Chapter of the same series. Most of her races are at the Virginia International Raceway, but Curtis said her home is in North Carolina.

When she isn’t competing, Curtis is a driving instructor at VIR.

She said her gums needed three-four months to heal after traditional implant surgery.

A representative from Yomi said most procedures performed with the robot should be covered by insurance. Curtis said she paid a portion out of pocket because DeAngelo had to repair a rotted implant from a previous procedure by another dentist.

Executive Periodontics of Cary, where DeAngelo works, did not respond to a request for clarification of billing by their office to insurance companies.