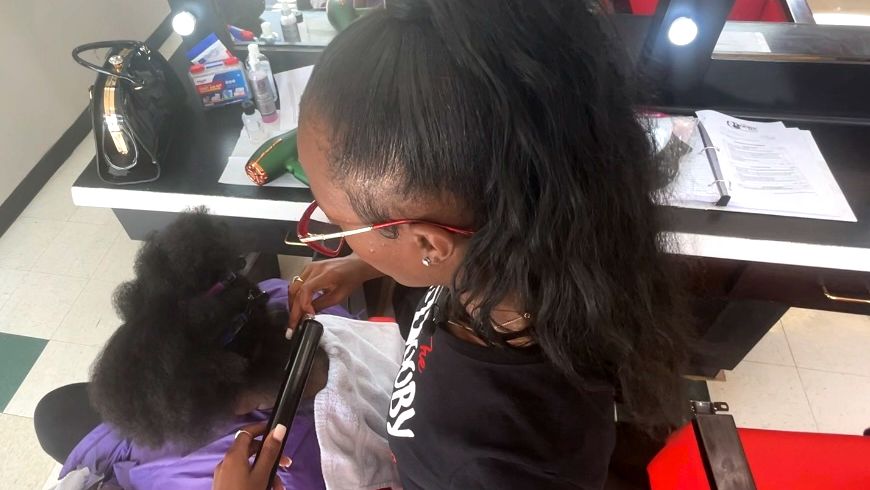 Jade McIver, a sophmore at Winston-Salem State who graduated from Rocky River High School in Mint Hill, has been doing hair to help pay for college and living expenses. (Spectrum News 1/Jennifer Roberts)

According to the Federal Reserve, the 2022 student loan debt totals over $1.7 trillion.

The majority of those debts are federal student loans, making up $1.6 trillion for 45 million borrowers.

Many families are hoping to feel some financial relief, following President Joe Biden's recent announcement of a plan to cancel some student loan debt for millions of eligible borrowers.

Last week, the White House rolled out details of the the student loan relief plan. It could erase loan balances for nearly 20 million borrowers.

The number of college students who've accumulated student debt is raising questions about college affordability and ways to make getting a higher education cheaper for students.

The average debt at graduation for student borrowers is almost $26,000, which breaks down to over $6,000 each year at a four-year public university, says the Association of Public and Land-Grant Universities. 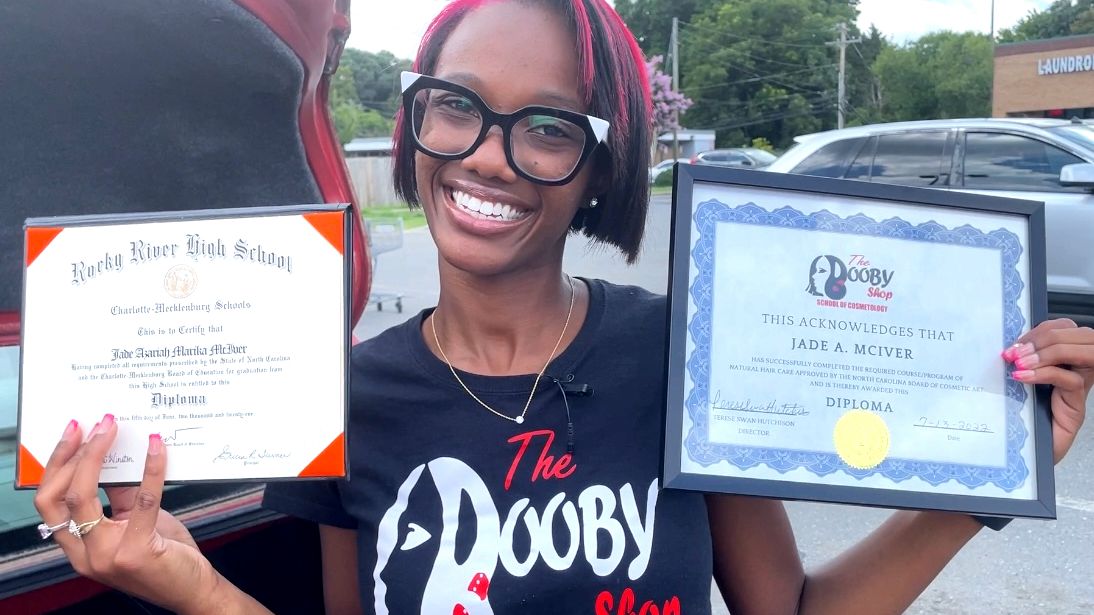 Jade McIver, a sophmore majoring in social work at Winston-Salem State, recenty graduated cosmetology school and will take the state board exams to get her license soon. (Spectrum News 1/Jennifer Roberts)

One college student is exploring a way to make her learning experience more affordable by doubling up her coursework and enrolling in cosmetology school.

Jade McIver, 18, is a sophmore attending Winston-Salem State. She recenty graduated cosmetology school and will take the state board exams to get her license soon.

She's majoring in social work at WSSU. After earning her bachelor's degree, she plans on opening a therapeutic mental health practice to support people in the Black community.

McIver says she learned the importance of fiscal responsibility at an early age.

"I grew up around entreprenuers," she said.

She eventually figured out ways to make and save money long before entering adulthood.

In 2021, McIver graduated from Rocky River High School in Mint Hill. She was only 16.

Before walking across the stage, McIver picked up a skill she would later use to get her through college — doing hair.

McIver developed a passion for hair in 2020, right after the COVID-19 pandemic hit.

"I decided to look up on YouTube how to do hair," McIver said.

After being accepted to Winston-Salem State, McIver soon realized her higher education would come at a high price.

The estimated annual costs for an in-state WSSU undergraduate is $19,728. This total reflects the college's tuition and fees, meals, housing and health insurance.

McIver says she is receiving some financial aid. But in order to cover all her educational costs, she needed to make some cash.

She eventually started doing hair to bring in extra bucks.

"I would invite people to my dorm and would ask to do their hair," she said. "Making money while doing hair was the best thing I could've done in college."

McIver says she made $5,000 in profit. It helped her pay for her first car and her college tuition.

But she says $5,000 covers only 10% of what she needs to cover all her expenses and lifestyle needs.

McIver wanted the option to work in a shop where she could make more money and develop a professional clientele.

But in order to work in the shop, she must be licensed to do hair.

McIver made the decision to go to hair school while still taking college classes.

In April, she started a three-month natural hair care program at The Dooby Shop School of Cosmetology, off Beatties Ford Road in Charlotte.

The 300-hour coursework prepares students for licensure and employment in their hair fields.

Owner and instructor Terese Swan Hutchison says the school has seen a boost of students after receiving its accreditation.

She says this status allows the school to offer financial aid to students.

"I see enrollment has picked up a lot more," she said. "As well as because of the natural hair program now requiring you have to have a natural hair license to even braid hair."

Hutchison says it's important to have schools like The Dooby Shop School in underserved communities, so they can help more students reach their career goals.

"If we don't build our own entrepreneurs to keep our dollars in our own communities, no one else will," Hutchison said. "I understand that's an opportunity. Just get whatever trade you can get under your belt. College is wonderful, but a trade, like hair, you can take that anywhere you go."

McIver says she picked The Dooby Shop School because it's Black-owned and supportive of young entrepreneur like herself.

The natural hair care program has given her the hands-on experience she needs to enter the professional hair industry.

But this training did come with some challenges for McIver. For weeks, she drove from Winston-Salem to Charlotte to attend the school, over 70 miles one way. McIver says it cost her an additional $300 in gas during those three months.

She says commuting back and forth to take classes at the cosmetology school and attend college classes was tiresome.

"At first it was a little overwhelming, having to literally type essays in the breakroom, then having to learn about hair," she said.

But she says the workload has been well worth it.

McIver just graduated from the natural hair care program and received her diploma.

She'll soon be taking the state board exams. If she passes, she can receive her hair license.

The licensure will open more doors for McIver.

As a licensed cosmetologist, she'll at least double the $5,000 she was making.

McIver will eventually have the option to get a job in a salon and earn more, so she can keep money flowing in to get her through college.

Tuition at the Dooby Shop's Natural Hair Care program is around $1,500.

The school also offers a cosmetology program, consisting of 1,500 hours. Tuition for that is around $10,000.